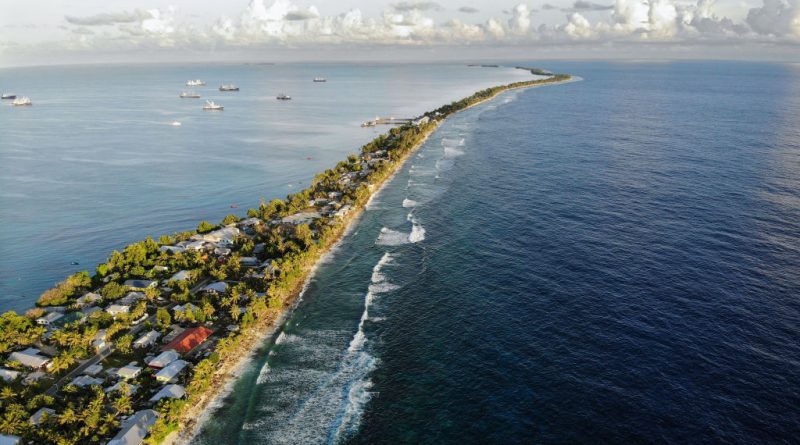 
The climate crisis is creating an increasingly uncertain future for people in most parts of the world. Paradoxically in my region, the Pacific, it is making our future increasingly certain—but not in a way that gives any kind of comfort.

During this century, several Pacific Island nations will become uninhabitable. For my country Tuvalu, which sits halfway between Hawaii and Australia, this could happen in the next two to three decades. Other Pacific Island countries on the climate change frontline may have a few decades longer, but our final destination is no longer a matter of guesswork.

Most societies see climate change as mainly about cutting carbon emissions or mitigating future impacts. We are facing a looming situation far more profound: the near certainty of terminal inundation. Our peoples, in my generation or the next, will be unable to exist on the islands that have nurtured our ancestors for centuries.

Tuvalu and our Pacific neighbors have done nothing to cause climate change. Carbon emissions combined across the entirety of the Pacific Islands amount to less than 0.03% of the world’s total—even less if we speak of historical emissions. The existential threat we face is not of our making. But it will remake us.

How we will negotiate this remaking is a question that the international community must now urgently begin to address.

People everywhere, across all ages and walks of life, are demanding leadership on climate change, especially from those most able to provide it. Tuvalu is an acid test of leadership: If the international community allows an entire country to disappear from climate change, what hope will be left for anyone else?

Science cannot tell us exactly when our homeland will become uninhabitable. But it does tell us how.

As the ocean rises, salt water permeates into the aquifers that provide our drinking water. A rising ocean brings higher tides, and with increasing storm intensity, our villages and fields are devastated. Flooding leaves soil saline, which reduces crop yields and weakens trees. Infrastructure such as homes, roads, and power lines are washed away, and higher land on which to rebuild does not exist.

The precious coral that supports our tourism and nurtures our fish-stock perish, as the ocean warms and acidifies. The cost of eking out an existence, of maintaining the status quo, increases for individuals and the entire country, over time becoming too much to bear. Families gradually leave; eventually, the nation itself becomes increasingly inchoate, legally and spiritually rooted to a shoreline that is disappearing under rising tides.

This is how a Pacific atoll dies. This is how our islands will cease to exist.

Tuvalu has not yet reached the end of this process of salination, destruction, degradation, and demise. But we are well past the beginning.

Despite international agreements and repeated commitments, global greenhouse gas emissions continue to rise, with many countries still pursuing a future fueled by coal, oil, and gas.

Read More: We Can’t Have a Stable Climate If We Keep Destroying Nature

Current international instruments such as the Convention on Statelessness do not begin to cover our situation. Neither does the United Nations’ various efforts to address climate change. Agreements reached at its annual summits, including last year’s COP26 in Glasgow, cover a wide range of issues like targets for cutting emissions or commitments for international finance to address impacts. But with regard to the looming uninhabitability of sovereign states, the conversations were disheartening.

This is why Tuvalu, together with the Marshall Islands are launching the Rising Nations Initiative to fill the current gaps in awareness, legal frameworks, and political commitment. The global community must begin a serious and responsible dialogue that acknowledges both the realities and the rights of Pacific Island nations such as mine, and more fundamentally, of our citizens.

There is no better time to begin than now, as U.S. President Joe Biden hosts the first joint summit between the US and the 12 Pacific Island states in Washington, D.C. President Biden speaks of a “broadening and deepening cooperation” on issues such as climate change. This is most welcome; we seek his support to begin a process that can eventually result in a solution for our urgently threatened nations.

We need a global settlement that guarantees nation states such as Tuvalu and the Marshall Islands a permanent existence beyond the inhabitable lifetime of our atoll homes. It must recognize and protect our cultural integrity, our human and economic capital, and our sovereignty. It must be co-created and enacted with the peoples and governments of Island nations, not visited upon us by others.

This settlement includes, ultimately, our relocation elsewhere in the world where our peoples will be welcomed and celebrated. Our peoples will expect to maintain their sovereignty and citizenship, preserve our heritage, and be educated in our language and traditions. We do not seek to be a burden on others; equally, natural justice dictates that we are not fobbed off with a wasteland. Economically, we can continue to support ourselves—in the case of Tuvalu, for example, using income from the continued sustainable use of the Exclusive Economic Zone around our islands.

Finding the right solution will require statesmanship and empathy, beginning with an acknowledgement that a situation globally caused must also have a globally just and equitable solution.

As Pacific peoples, we raise our children to respect the ocean, land, and sky, as providers of life. Now, through no fault of our own, we will soon have to abandon the ocean, land, and sky that have forged our cultures and identities. We neither castigate nor demand charity. But we do ask for generosity of spirit, support, and justice that recognizes our grave reality. The international community needs to act now; we cannot afford to wait any longer.