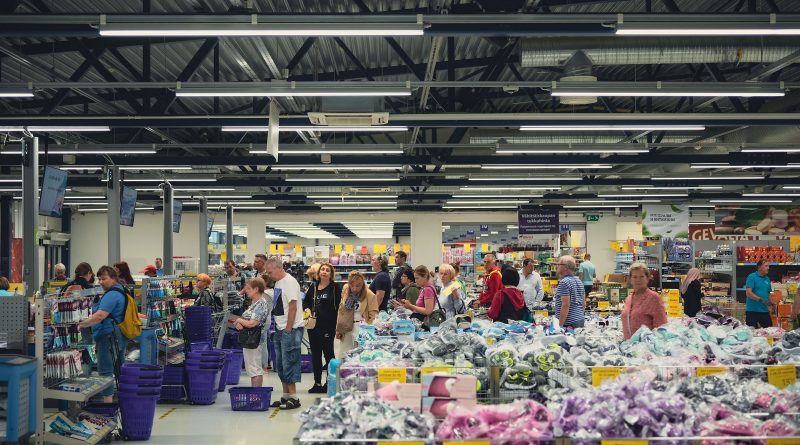 
Laplandia greets the shopper with the powerful aroma of smoked salmon. The sprawling warehouse of a store—located on the outskirts of Lappeenranta, Finland—opens to a display counter stocked with great slabs of the fish on plastic trays, some of it cured with herbs, some of it sprinkled with local lingonberries. But Elena wasn’t there for fish. On the morning of Aug 31, the 30-year-old Russian (who declined to give her last name to avoid social media criticism) had driven about 125 miles from St. Petersburg, Russia to buy warm clothing and shoes for her young son, plus other household supplies that EU and American sanctions had made it difficult to find at home . There was an urgency to her shopping as she beelined past the candy-colored heaps of plastic sandals and gigantic bags of chips, to a row containing industrial-sized bottles of laundry detergent—aware of a looming decision by the Finnish government “I’m worried they’re going to close the border again,” she said. “So we’ve been stocking up. This is my third trip in a week.”

Elena had reason for concern. Ever since Aug. 8, when Ukrainian president Volodymyr Zelensky called for Western countries to ban visas for Russian tourists, some European countries have been taking the suggestion very seriously. On Sept. 1, Finland—which shares a 830-mile land border with Russia—began sharply restricting the number of tourist visas it issued, from 1,000 to 100 per day. And the day before, when Elena made her third trip to Laplandia, the E.U.’s foreign ministers agreed at a meeting in Prague to make it harder—but not impossible—for Russians to travel. If some of those ministers have their way, more restrictions could be coming.

“It’s not right that at the same time as Russia is waging an aggressive, brutal war of aggression in Europe, Russians can live a normal life, travel in Europe, be tourists,” Finland’s Prime Minister Sanna Marin told broadcaster Yle on Aug. 8.

Read More: ‘There’s an Atmosphere of Fear.’ With Flights Banned, Russians Are Fleeing By Train for Europe

Marin’s country is one of the few access points into Europe after the E.U. imposed a blanket flight ban to and from Russia three days after Russia launched a full-scale invasion of Ukraine on Feb. 24. Since Russia lifted its remaining COVID-19 restrictions on July 15, the number of people driving across at border station Nuijamaa near Lappeenranta—as well as others—has surged. “I would say it has grown about 5% per week,” says Petri Kurkinen, deputy chief of the local Finnish border police. “Right now, we’re at about 3,000 people per day.”

Many of those people, like Elena, had just come for a day’s shopping and would return to Russia that same evening. But others would travel to coastal cottages in Finland for summer vacations or drive straight to the airport in Helsinki, the country’s capital, and then board flights for Spain, France, and Greece. According to Frontex, the E.U.’s border agency, more than 1 million Russians have done just that since the invasion, most of them via Finland and Estonia, which also shares a land border with Russia.

For some of Europe’s leaders, the sight of Russian tourists sunning themselves on their beach or sitting in outdoor cafés while some of their fellow citizens participate in the devastation of Ukraine, was morally untenable. They also worried about the security threat. “What do the chemical attack in Salisbury in 2018, the Czech arms depot explosion in 2014 and the killing of a Chechen dissident in Germany in 2019 have in common?” wrote Estonian Prime Minister Kaja Kallas in a statement to TIME. “The answer: Russian agents using European tourist visas. We can see a clear pattern. Amidst aggressive Russia next door, the risk of Russian agents posing as tourists in [the] E.U. is logically higher than ever. And they do not just spy, they are often an active part of Russia’s hybrid and information warfare that’s happening alongside conventional war.”

On Aug. 18, Estonia stopped issuing tourist visas to Russians and stopped permitting entry under ones previously issued. Since then, it and other countries like Lithuania, Denmark, and the Czech Republic, have advocated for an outright ban on all Russian tourists throughout the Schengen Area—which covers 26 European countries and stretches across most of the continent. (European travel for other purposes, such as humanitarian reasons, visiting family, or to seek asylum, would remain protected.) “I simply don’t think that it is appropriate that at the same time when Ukrainian men and families have to defend their country, Russian men and Russian families can enjoy beaches in southern Europe,” says Estonian Member of the European Parliament (MEP) Urmas Paet, who serves as vice-chair of the E.U.’s Committee on Foreign Affairs.

Beyond that moral reasoning lies a political calculation: that increasing the pain for those Russians with enough disposable income to travel in Europe will encourage opposition to the Putin regime. “So far, people from Russian cities don’t actually feel the impact of Russia’s war in Ukraine,” says Paet. “The majority of soldiers come from poor provinces, not from Moscow and St. Petersburg. But if Europe bans tourists from coming, it will also increase the understanding in Moscow and St. Petersburg. And that may influence policy making.”

Yet other countries, including Germany, France, Spain, and Greece, have pushed back against that argument. Some leaders say that it is unfair to punish ordinary Russians for the policies of their government, particularly in an authoritarian country where the costs of dissent are high. Others contended that a visa ban would impede the work of dissidents attempting to collaborate with their counterparts outside Russia. “While limiting contacts with regime representatives and authorities to areas of vital EU interest, we need to strategically fight for the ‘hearts and minds’ of the Russian population—at least the segments not yet completely estranged from ‘the West,’” read a joint memo from France and Germany, according to a Reuters report on Aug. 30.

Opponents to the ban also expressed doubt that, in a country where it remains illegal to refer to the war as, in fact, a war, it would generate enough dissatisfaction inside Russia to have any kind of meaningful impact on the regime. “The political argument is completely misleading because less than a third of the Russian population has a passport to travel abroad,” says Marie Dumoulin, director of the Wider Europe program at the European Council on Foreign Relations (ECFR) Instead of leading to policy change, it would instead be “a wonderful argument for Kremlin propaganda. It will be presented as proof that it’s not about Russia waging a war against Ukraine, it’s the West waging a war against Russia, because the West is Russophobic. The Kremlin will say, ‘see, they don’t like Russians, they don’t want to see Russians in Europe.’”

Read More: In a War of Ideas, Banning Russian Propaganda Does More Harm Than Good

Ahead of the Prague meeting, tension between E.U. states over the proposed ban had grown quite sharp. But with European unity at stake, the bloc’s foreign ministers managed to reach a compromise, and decided to suspend a 2007 agreement that facilitated visas for Russians. (It’s unclear when this will take effect.) As a result, the cost of a tourist visa will rise from 35 euros to 80, the amount of documentation required from applicants will increase, and the length of time for obtaining a visa will stretch from a maximum of 10 days to 15.

The ECFR’s Dumoulin sees the decision as a success simply because it represents a compromise. “At some point, European unity is itself a policy goal. And it’s a much more important goal than setting symbols.”

Yet others aren’t so sure. The decision represents “a step in the right direction,” according to MEP Paet, but it “doesn’t go far enough.” And because it doesn’t prevent some countries from taking further action, as Finland and Estonia have done, the debate may not be over yet. As the border closures of the pandemic have shown, the Schengen agreement requiring visa-free travel among member states can be more flexible than expected in certain cases.

Those cases include security risks. “By the end of the meeting in Prague, a big number of E.U. countries were convinced that 12 million Russian citizens with valid, long term Schengen visas is a problem to E.U. security,” Lithuanian minister of foreign affairs, Gabrielius Landsbergis, wrote to TIME. “Thus, E.U. member states bordering Russia may apply national or regional security measures. Together with Estonia, Latvia, and Poland, in the coming weeks, we will seek to find solutions that will allow us to significantly limit the flow of Russian tourists.”

At the Nuijamaa border crossing in Lappeenranta, buses of Russian tourists stream into Finland. Some are looking to enjoy the Finnish summer and some are planning to travel further into Europe.

Back in Lappeenranta, which sits less than 40 miles from its sister city Vyborg in Russia, Finns are largely happy with the new restrictions, says Mayor Kimmo Jarva. The city has a long history of peaceful ties with its neighbor to the south, and in fact, counts some 3,000 Russian-speakers among its population of 72,000. Lappeenranta’s economy also relies—or has relied— heavily on Russian shoppers for years. “Before COVID, there were about 4,000 Russians coming every day,” Jarva says. “Now we are losing about 1 million euros every day. That started with COVID, but even now, many think we shouldn’t let them come. Although his city is “suffering economically,” Jarva says the sacrifice is worthwhile.

From his window in city hall, Jarva can gaze out at a cemetery where every headstone, he says, belongs to a soldier shot by Russians in the Second World War. That memory helps explain the local population’s desire to show its support to Ukraine—and just maybe irk Russian tourists.

So every evening at 7:30 p.m. for the past month, city hall speakers have boomed Ukraine’s national anthem. “We wanted to show our support, but also put a little bit of pressure on Russians, because we think it’s wrong that they can come and live a normal life,” Jarva says of the initiative. “Our citizens told us to do something. This is democracy.”