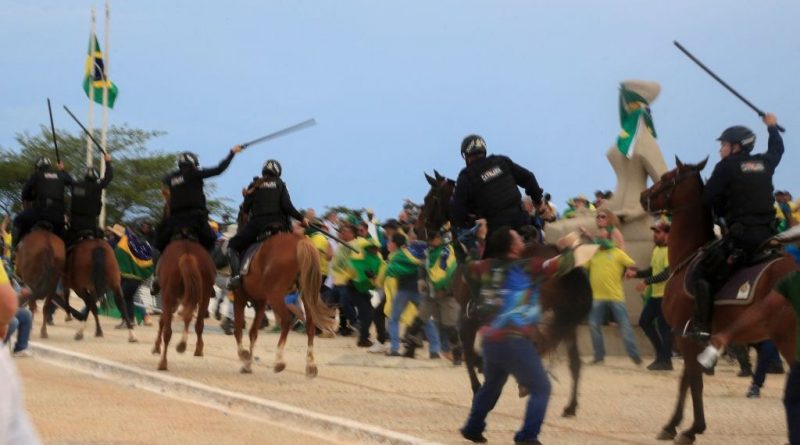 
When supporters of former president Jair Bolsonaro charged into the Presidential Palace, the offices of Congress, and the Supreme Court in Brasilia on January 8, they ignited a firestorm that continues to make headlines around the world. Polls suggest a clear majority of Brazilians, including large numbers who voted for Bolsonaro, were horrified to see the ransacked offices, busted-up equipment and furniture, broken windows and other acts of vandalism they committed. Not to mention violence between rioters and police. The first survey following the event, from Atlas Intel, found that 76% of respondents condemned the attack, and just 18% supported it.

In response, authorities in Brazil have taken action. The Solicitor General’s office and courts have promised tough legal steps against protesters and all who abetted their crimes. More than 1,200 were originally detained, and more than half those people were later placed under arrest. In addition, Supreme Court Justice Alexandre de Moraes, who also oversees Brazil’s elections, suspended Federal District Governor Ibaneis Rocha, a Bolsonaro ally, for 90 days to ensure he didn’t interfere in the legal process. On Tuesday, arrest warrants were issued for two government security officials who failed to prevent or stop the violent protests. Questions about why the rioters faced so little police resistance as they raced through the front doors of Brazil’s most important political institutions will continue.

For the moment, renewal of violence is unlikely. Bolsonaro himself has condemned the destructive acts committed on his behalf. The military, which protesters have called on for weeks to join their insurrection, remains officially on the sidelines in this conflict. Security forces, which now have no excuse for missing signs of looming trouble, appear ready to avoid a repeat in other Brazilian cities. The newly inaugurated president, Luiz Inacio Lula da Silva (popularly known as Lula) will probably see a short-term boost in public support as most Brazilians recoil from this sorry spectacle.

Read More: The Brazil Insurrection Is Part of a Broad Crisis of Trust

But Brazil’s radicalized opposition won’t simply disappear. Though independent experts have dismissed claims of election fraud, public suspicion of the country’s establishment has reached its highest point since the end of military rule in 1985. In that same poll which had more than three-quarters condemning the January 8 insurrection, 40% said that Lula did not win more votes than Bolsonaro in the election, and 37% favored military intervention. They’re angry that some who believe these conspiracy theories are losing their social media accounts and even their passports. Hundreds, including many who didn’t actively participate in the riots, have been targeted for arrest or are already in police custody.

And though the vandalism has boosted Lula’s popularity, tough economic conditions and too few reliable allies in Congress suggest his surge will prove short-lived. As he becomes more unpopular, those who consider him illegitimate may well move against him again. At the very least, large-scale demonstrations and paralyzing strikes will inflict economic and political damage.

There is another reason this protest movement is likely to last: Unlike then-still-president Donald Trump’s figurative call to arms just hours before the ugly protests inside the U.S. Capitol almost exactly two years, Brazil’s surge of conspiracy theorists and vandals didn’t need a sitting president to egg them on. Bolsonaro was already out of office and in Florida when the vandals pushed past Brasilia’s barricades, and he had already offered half-hearted admission of defeat, which Trump has never done. Brazil’s insurrectionists needed no call to arms.

In addition, the investigation into the rioting has expanded to include those who may have financed the insurrection and a poorly explained request from prosecutor for a freezing of Bolsonaro’s assets. Authorities have also told Brazilian media they plan to take action against executives of more than 100 companies who may have helped feed and shelter protesters and financed their plans. In particular, Lula publicly denounced support for the rioters by agribusiness, which overwhelmingly backed Bolsonaro’s failed re-election campaign. As the retaliation expands, so will resentment of a government that many in the right already consider entirely illegitimate.

Who else may have made this destruction possible? There will be investigations into accusations that Trump allies in the U.S. may have played a role in stoking anti-election fury and even with helping plan and finance the violence. Brazilian authorities have called on the Biden administration to help.

There is another form of possible American complicity, albeit indirect. Whatsapp, an American company owned by Meta, is responsible for much of the social media disinformation that stoked fear and anger over a left-wing takeover in Brazil. A country that prides itself on the global promotion of democracy has become an exporter of communications tools that have inadvertently helped to distort the worldviews of billions of people.

For now, Brazil’s right says Lula has crippled the country’s democracy by launching a coup. Brazil’s left says the protesters are fascists who never believed in democracy in the first place. And there is no evidence that the events of January 8, dramatic and ugly though they were, have changed many minds.