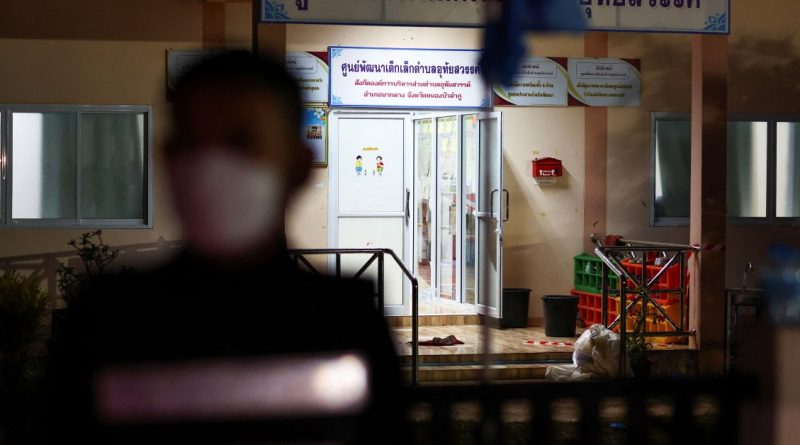 
The self-styled Land of Smiles weeps once again. Thursday’s massacre at a childcare center in Uthai Sawan town in Thailand’s northeastern province of Nong Bua Lamphu is the nation’s bloodiest ever by a single perpetrator and has left the public reeling. At least 38 people, including 24 children, were killed in the gun and knife attack, with some victims as young as two years old.

The assailant was identified as Panya Kamrab, 34, a former police corporal who was fired last year after being arrested for possession of methamphetamine. He later killed his wife and own four-year-old child before shooting himself, according to the Thai police.

Thai Prime Minister Prayuth Chan-ocha called the massacre “shocking,” though it is now anger that is coursing through Thai society. The last mass shooting of this scale in Thailand occurred just two years ago, when a soldier armed with an assault rifle opened fire on a military base in the central city of Korat, killing his superior officer who he accused of cutting him out of a lucrative property deal. He later laid siege to a shopping mall and died in a firefight following an hours-long standoff. In total, 29 people were killed and nearly 60 others wounded. That another individual entrusted with protecting the public could turn on them so savagely has shaken the devoutly Buddhist nation of 70 million deeply.

“A lot of people are angry,” Hathairat Phaholtap, editor of the Isaan Record newspaper that covers Nong Bua Lam Phu, tells TIME from Uthai Sawan. “They can’t believe this happened in a quiet, sleepy place like this.”

Amid national soul-searching following Korat, a thorough investigation was promised. But none was ever made public. On Thursday, Prayuth again promised to investigate this latest tragedy but many are skeptical. “This will shake Thailand because it’s so rare and the victims so innocent,” says David Streckfuss, an independent scholar who lived in the Thai city of Khoen Kaen close to Uthai Sawan for two decades. “I would think that this is going to move something.”

The tender ages of the victims is especially traumatizing for Thai society, where children are so prized and coddled that elderly people will commonly give up their seat on public transport for a toddler. Jidapa Boonsom, a district official, told Reuters that it was naptime at the childcare center when the gunman opened fire and some children were reportedly killed in their sleep.

Boonsom also told Reuters that the gunman first shot four or five members of staff, including a teacher who was eight months pregnant. “At first people thought it was fireworks,” she added. After the shooting, the gunman also opened fire at passers-by as he fled in a white pick-up.

The assailant’s motivation has not yet been determined but his dismissal for a drugs offense has led to speculation that addiction played a role. Panya reportedly appeared in court on drugs charges prior to the attack. “Narcotics is the cause,” tweeted democracy activist Thaikorn Polsuwan. “Since Prayut came to power, methamphetamine and drugs are all over. Now, the price is 7 baht [20 cents] per pill. … Are you going to let drugs continue to swarm the [country] like this?”

Asia is suffering from a meth epidemic with a record 172 tons seized in East and Southeast Asia in 2021—seven times higher than a decade ago—including over 1 billion methamphetamine tablets, according to the U.N. Some 120,000 Thais were also busted for drugs in the 6 months until April, with 80% of inmates in Thai prisons jailed on drug offenses—mostly methamphetamine. Although most meth originates in the restive border regions of Myanmar, Thailand is a major transit hub and addressing the nation’s methamphetamine crisis is “a top priority for the government,” said Thanakorn Kaiyanunta, Deputy Secretary-General of the Office of the Narcotics Control Board of Thailand, in a statement earlier this year.

Others have seized upon the tragedy as evidence that Thailand’s notoriously corrupt police force requires a thorough overhaul. Even since Thailand’s 2014 coup d’etat that brought Prayuth to power, reform of the police has topped the agenda, yet progress has been torpid. Thailand’s security services operate as a “state within a state,” prominent Thai opposition politician Thanathorn Juangroongruangkit previously told TIME. Junior officers barely earn a livable wage and are expected to supplement their income through bribes. Typically, officers must bid for promotions to senior ranks with better opportunities for graft. Thai social media is awash with rumors that the assailant was forced out of the police after falling out with his fellow officers.

“Shooting in Korat caused by stress. Shooting at Nong Bua Lamphu caused by drugs and stress,” tweeted one outraged Thai citizen. “Shouldn’t we look at the system? With security organizations like this, no one will dare trust them.”

Others have pointed to the rampant proliferation of guns in Thailand. While mass shootings are thankfully rare, Thailand had more than 10.3 million privately owned firearms in 2017, according to a survey by gunpolicy.org at the University of Sydney, with only 6 million officially registered. Thai civil servants of all stripes—not just security personnel—are permitted to purchase subsidized guns legally, which then find their way onto the black market. The situation in Myanmar—where a putsch last year dethroned the civilian government of Aung San Suu Kyi and spawned new and reinvigorated old anti-junta rebel groups—has caused a spike in demand.

The 9mm Sig Sauer semiautomatic handgun that the assailant used on Thursday was reportedly bought legally while he was a police officer. More introspection will come as details emerge in coming hours and days. In the meantime, Thais have swarmed local hospitals to donate blood. On social media, many grimly remark upon the date: On Oct. 6, 1976, Thai police and paramilitaries murdered at least 40 leftist protesters and wounded 169 more at Bangkok’s Thammasat University in one of the Kingdom’s darkest days. Now, 46 years later, Thailand mourns again.

“Mass shootings are rare in Thailand,” says Streckfuss. “I’m just astounded. This is like America.”