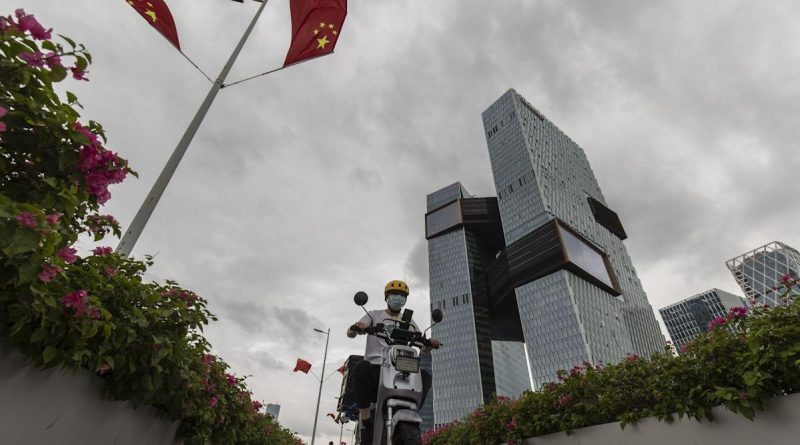 
(Bloomberg) — Tencent Holdings Ltd. plans to distribute more than $16 billion of JD.com Inc. shares as a one-time dividend, representing a near-retreat from the Chinese e-commerce firm that is stoking concerns it will pull away from other marquee investments.

The surprise move to divest most of its stake in China’s No. 2 online retailer comes as Beijing punishes the country’s tech giants for monopolistic behavior, including maintaining closed ecosystems that favor certain companies at the expense of others. Tencent’s handout may buy goodwill with the government, which has pushed for the dismantling of barriers and for tech firms to share the wealth. As part of the deal, Tencent President Martin Lau will exit JD.com’s board effective Thursday.

Shares of JD.com dropped as much as 11% in early Hong Kong trading, while other Tencent investees Meituan, Kuaishou Technology and Bilibili Inc. also declined at least 3%. Tencent’s stock jumped more than 3%.

“The divestment shouldn’t come as a complete surprise and could be read as a reaction to anti-monopoly investigations — it’s pretty clear that regulators don’t want to see too much ‘faction-like’ patterns in big tech,” said Chen Da, executive director at HHSC Assets (HK). “It’s likely that it will be read as the start of breaking up the huddle a bit.”

Tencent plans to give out 457.3 million Class A shares in JD.com, representing about 86.4% of its total stake and nearly 15% of the online retailer’s total issued shares, according to a filing to the Hong Kong stock exchange. At Wednesday’s close, the shares in the proposed distribution were worth HK$127.7 billion ($16.4 billion). Tencent, which controls about 17% of JD.com, will hold roughly 2.3% of the e-commerce company’s shares after the handout, JD.com said in a separate statement.

The special dividend would rank among the largest shareholder giveaways ever by a Chinese tech company, which have long relied on rapid growth and investment to satisfy investors. Tencent’s strategy is to invest in companies during their development stage and to exit the investments as they become capable of financing future initiatives on their own, the internet giant said.

“The Board believes that JD.com has now reached such a status, and the Board therefore considers that it is an appropriate time to transfer” the majority of the shares to its investors, the company said.

The proposed dividend comes after Chinese tech shares have been battered by more than a year of intense regulatory scrutiny. The crackdown, which has spanned antitrust to after-school education, gaming and online content, has slowed growth at internet firms from Tencent to Meituan and fierce rival Alibaba Group Holding Ltd., forcing the companies to invest heavily in new earnings drivers.

Xi Jinping’s call to achieve “common prosperity” and level income inequality has also prompted the firms and the moguls behind them to make public pledges to philanthropic efforts. Tencent has already announced it’s setting aside $15.7 billion for social responsibility programs.

The two firms will continue to maintain their “mutually beneficial business relationship, including via their ongoing strategic partnership,” Tencent said.

Having Tencent as its major shareholder gave JD.com access to the internet giant’s vast ecosystem, including the super app WeChat that the majority of Chinese consumers use for messaging, paying bills and making purchases. It’s one of several Tencent-backed firms — including Pinduoduo Inc., ride-sharing giant Didi Global Inc. and food delivery giant Meituan — that have come to dominate their respective spheres, thanks in part to the enormous traffic that WeChat’s billion-plus users generate.

Competitors such as Alibaba have long complained that links to their services have been blocked, though that is slowly changing under Beijing’s pledge to drive out anticompetitive behavior in the internet arena. Tencent will soon allow WeChat groups to display links to external shopping sites such as Alibaba’s Tmall and Taobao, Bloomberg News has reported.

Tencent’s plan to distribute the bulk of its holdings in JD.com to its shareholders as a special dividend may signal more divestments down the line by Tencent of its China e-commerce investments such as Kuaishou and Pinduoduo. The move could be in response to China’s anti-monopoly crackdown, which aims to promote fairer competition between Tencent affiliates and Alibaba and others, and may give Tencent greater scope to accelerate overseas investments.

Other companies such as Alibaba may have to withdraw their previous investments in some successful startup companies, said Gary Ching at Guosen Securities (HK).