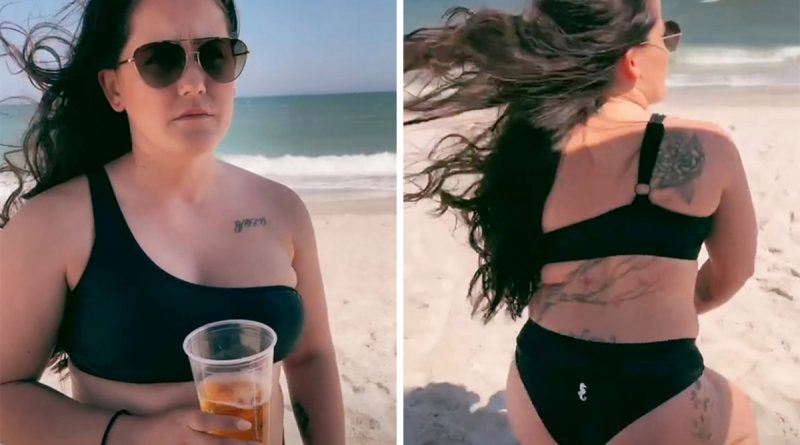 
DAVID Eason was slammed by fans for filming an “unflattering” video of his wife Jenelle and “humiliating” her while in a bikini.

The Teen Mom 2 alum recently clapped back at trolls who urged her to “get a real job.”

David, 32, has faced backlash from fans after filming an “unflattering” video of his wife in a black bikini.

Jenelle stood on the beach holding a pint of beer, flicking off the camera as she looked like she didn’t want to be filmed.

The 29-year-old then laughed as David zoomed in on her belly and then her butt to show off her body.

At the end of the clip, the reality star turned around and twerked to the beat of the music.

Fans were astonished that the father of three would film such “humiliating” content as they rushed to Reddit to slam him for being so “hateful.”

“Did David film this? If so, girl he hates you. Simple as that,” one expressed.

“Okay, my bf thinks my fat a** is hot too, but he doesn’t channel his inner Michael Bay to make flab films,” another joked.

A third ranted: “Omgoodness. That was gross, a little violent, super awkward, but mostly just embarrassing. I’ve never been more embarrassed for someone in my life.”

“I actually hate this song. It’s supposed to be about body positivity but says if you have a belly or a bum that you’re not pretty. What kind of message is that???” a fourth remarked.

“Ah, yes. Nothing like your husband zooming in on your ass and belly to the tune of ” I’m not pretty ” lyrics to make you feel better #thanksbabe,” a final slammed.

Last week, Jenelle took to the video-sharing platform to respond to her haters who advised her to “get a job.”

The mother of three twerked and popped her body to the music, and captioned her clip: “When people tell me to get a real job. You don’t pay my bills.”

Some of Jenelle’s followers loved the post and encouraged her to keep working as an “influencer” promoting products on her social media.

“Tell em boo,” wrote one fan, while a second agreed: “Why does it matter what people do for money so long as it’s not illegal?”

One commenter asked: “if you did have to get a job what do you think it would be,” and Jenelle replied, “something in the medical field.”

Jenelle has been limited to influencing after she was fired from MTV in 2018.

The controversial parent was axed after her husband shot and killed their family dog, and fans found some offensive and hateful tweets from him directed towards the LGBTQ community.

The MTV star’s wild dancing of late has shocked fans after she recently claimed she was playing the “waiting game” before she could become “paralyzed” from her spinal cord disorder.

In early July, Jenelle explained that she suffers from syringomyelia, which is a disorder that causes a fluid-filled cyst to develop within the spinal cord.

The young mom said it was “inevitable” that she would one day be paralyzed.