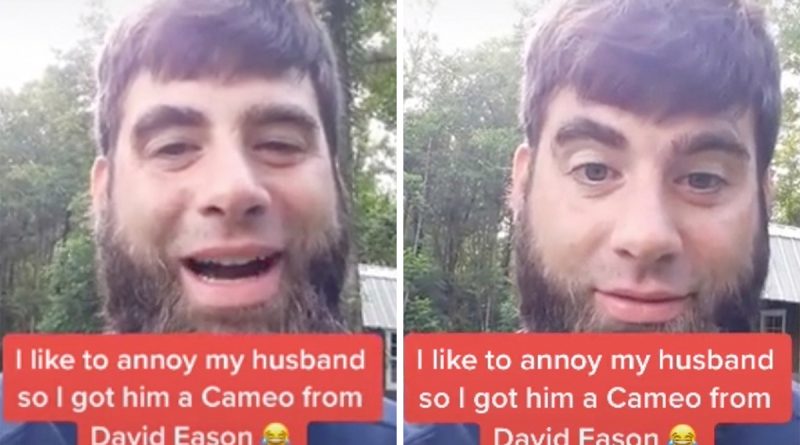 TEEN Mom star Jenelle Evans’ husband, David Eason, called a fan a ‘piece of s**t’ and told him he was ‘nothing’ on his birthday.

David, 33, who charges $20 per Cameo to do a shoutout on the celebrity site, hurled insults at the birthday boy in the bizarre video.

A woman called Savannah posted the video to her TikTok after paying David to ‘roast’ her husband Monty on his birthday.

“I like to annoy my husband so I got him a Cameo from David Eason,” she captioned the TikTok.

David filmed the Cameo in his backyard and clearly improvised his message.

“Your wife Savannah wanted me to roast you, but she didn’t tell me nothing about you. So that must mean what you are, you’re nothing.

“People call me a piece of s**t too, well at least they do call me, they also talk about me a lot, which your wife doesn’t seem to do about you, very much.”

He added: “I guess that could be a good thing or a bad thing. Sometime some people’s wives talk a lot of s**t about them and don’t even mean it, it’s so silly.”

“Anyway, I hope you have a good day, I hope you enjoy this Cameo, it’s from your wife Savannah, don’t give her too much grief, bye.”

A Teen Mom fan posted the Cameo to Reddit which lead many to criticize his video.

“Second hand embarrassment from this. Jeez,” wrote on fan.

Another added: “That was very strange.”

And a third said: “Scary as hell even thinking about this psycho talking directly to me.”

David’s Cameo comes after Jenelle defended herself from trolls who accused her of being ‘racist’ and ‘homophobic’.

Jenelle shared a clip as she set the record straight, saying: “I’ve never been racist or homophobic.

“And if you really think that then please show me an example of my past where I have been because I would love to know.”

Jenelle is a mom to three children – sons Jace, 11, and Kaiser, seven, and daughter Ensley, four.

Fans recently slammed Jenelle and her husband David for their questionable parenting styles.

Previously, David, 33, shared a video of the walls of their family home covered in paint, crayon marks and mud by the children.

The ex TV star went round the house videoing pen and paint marks and small doodles left by the children on the walls, furniture and doors.

Fans slammed the couple for allowing the children to be unsupervised and draw on the walls.

“Tell them not to draw on the walls and learn to parent,” one woman wrote, to which Jenelle responded: “We parent just fine.”

Meanwhile, earlier this month Jenelle was slammed for drinking at 11am after fans spotted cans of Corona on her desk.