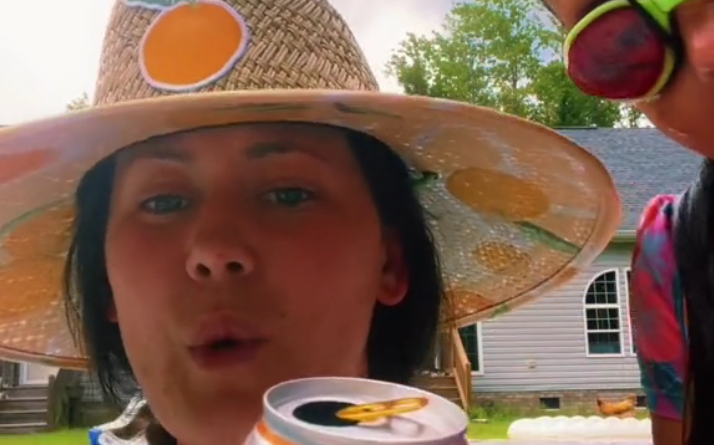 JENELLE Evans has been accused of slurring her words while filming a TikTok in the pool with her young children.

The Teen Mom 2 alum, 29, drank a can of beer while ranting about how “mean” fans are on Instagram in a clip with her son Kaiser, seven, and daughter Ensley, four.

Jenelle wore a pink top and a large straw hat with an orange print on it as she told fans: “Can we talk about how mean Instagram is?”

“‘Y’all will be commenting and I will delete i. Because y’all are so mean, I don’t want to read it. Y’all are so much nicer on TikTok.

Kaiser then came up behind her and added, “And it’s full of kids that love their mom,” before Ensley put his arms around Jenelle.

Jenelle then picked up her beer and made a toast to the camera in ode to Kaiser’s sweet words.

Viewers claimed the Teen Mom alum seemed “wasted” and said it was “sad” to be drunk in the day on a Wednesday.

“Yeah I started the video and it was crystal clear she’s slurring and wasted. Super embarrassing to post this, but that’s her lol,” one wrote on Reddit.

🍼  Follow all our latest news & stories on Teen Mom.

“Her being THAT drunk on a Wednesday afternoon is just sad.”

This is not the first time Jenelle has been called out over her drinking habits.

Earlier this month, fans shared their concern that Jenelle is developing a drinking problem after spotting Corona cans on her desk at 11am.

Fans first spotted drinks appearing in the background when Jenelle was seen sipping on a Corona Lite in an Instagram Live during the day.

Earlier this year, a Reddit user pointed out Jenelle, 29, had been drinking a Corona from a can while working on her podcast in the morning.

In a related thread, a fan noted Jenelle had also walked by husband David Eason’s live streams and “tried to conceal her beer” on one occasion.

Others noted the couple showing off their “frequent visits” to bars and restaurants, where they sink large cocktails.

In April, the mother-of-three insisted she is NOT an alcoholic and only drinks “three beers a week” after fans slammed her for drinking in the afternoon.

During a recent YouTube video, Jenelle called out fans that said she drinks too much.

After reading an article headline that claimed she has a drinking problem, Jenelle said: “Y’all, if you even knew. When I was younger I drank so much liquor. You can call me an alcoholic when I was younger.”

After noting that she drank a lot when dating ex Nathan Griffith, Jenelle said that she began to have esophagus problems and “if I drank too much I’d start having esophagus spasms at the end of the night and I’d be throwing up.”

The former reality star said: “With that being said, I completely stopped drinking liquor.”

Jenelle then shared that she and husband David Eason now only drink beer, stating that she has “two to three a week.”