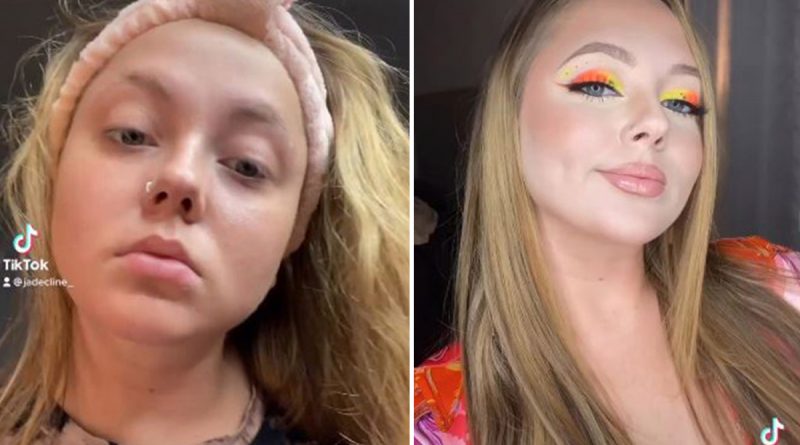 The MTV reality TV star, who recently shared a rare video of herself without using filters, took to her social media page to showcase the before-and-after shots.

🍼  Follow all our latest news & stories on Teen Mom.

The first slide, re-posted to her Instagram Stories, showed the mom of one, 24, with a towel band around her forehead to scrape back her hair.

She went make-up free and left her blonde mane wavy and unstyled, but accessorized with a nose ring.

The Teen Mom pouted at the camera wearing a patterned T-Shirt.

The video then flipped straight to her fully made-up look, where she revealed her beaming smile.

She kept the rest of her make-up dewy and natural aside from a sweep of pink blush on her cheeks.

Yet gone was her wavy hair in favour of poker straight locks hanging over her shoulders.

The stylish mom also took care to match her outfit to her bold cosmetics, wearing a pretty patterned top.

Jade recently spoke out about her worries following her plastic surgery makeover.

The Teen Mom 2 star admitted she thought she might “die” following the dramatic procedure that left her looking “unrecognizable.”

Jade again took to TikTok to share a hilarious video as she joked about getting “stretch marks” from birthing her daughter Kloie, three.

The reality star left her hair wild and natural and opted for reading glasses but no makeup as she started the clip off with an angry expression.

The TV personality then yelled at the camera as she captioned her clip: “You gave me the stretchmarks!”

Jade turned the camera on Kloie who screamed back: “I did not!”

The mother of one’s post came as a bit of a shock, as she rarely shares photos or videos without full glam makeup since her dramatic plastic surgery operation.

Earlier this year, she traveled to Miami where she went under the knife to have a Brazilian butt lift surgery and liposuction 360.

Fans watched as Jade went through the intensive surgeries, which removed fat from her arms, chin, and stomach, and relocated it to her butt.

After emerging from the hospital, she was wrapped in a compression bodysuit and had to ride on a mattress in the trunk of the car the entire way to their rented Miami home.

During the episode, Jade was screaming and crying from the intensity of the pain.