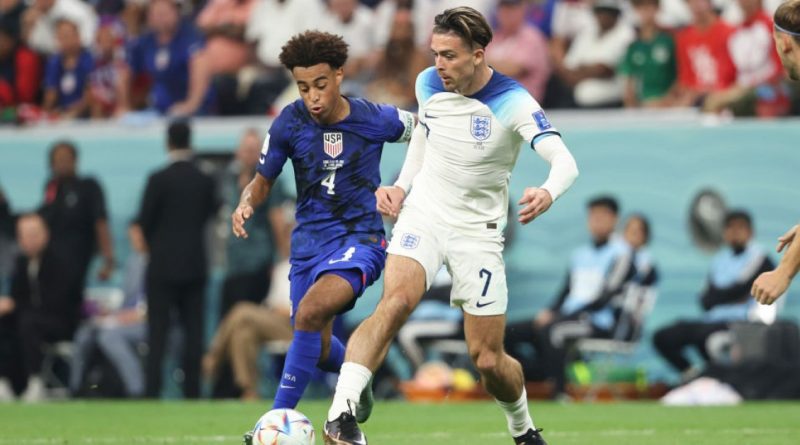 
After Iran’s seismic 2022 World Cup win over Wales early Friday afternoon blew Group B wide open, it was incumbent on Team USA to lay down a marker in their match against England—a performance to prove the buzz surrounding this inexperienced but talented squad isn’t mere hype.

Gregg Berhalter’s youngsters didn’t disappoint on a balmy evening at Qatar’s Al Bayt Stadium, where they went toe-to-toe with the Three Lions in a hard-fought 0-0 draw that keeps chances of qualifying for the knockout stages in their own hands. The result leaves England with four points, Iran with three, the U.S. with two and Wales with just one. A win against Iran on Tuesday would be enough to see the USMNT qualify from the group.

“It was a really good performance from us. There were stretches of the game when we had control and pushed them back,” said Christian Pulisic, who was named man of the match, during postgame press.

A clash between Team USA and England is on paper a mouthwatering prospect, and despite the goalless scoreline, this was a match with plenty of action. England is among the favorites to lift the famous golden trophy, sitting fifth in FIFA’s World Ranking and 11 places ahead of the U.S.

Still, England manager Gareth Southgate cautioned against any superiority complex on Thursday, reminding journalists that England had never beaten the U.S. in a major tournament. “We are good at talking highly of ourselves as a nation on the basis of very little evidence,” said Southgate. “We’ve got to perform on the pitch,” he said. A 1-0 loss in the Brazil 1950 World Cup was followed by a 1-1 draw at South Africa 2010, before which British tabloid The Sun printed an infamously regrettable front page that proclaimed the group “easy.” (England failed to progress.)

Following the match on Friday, Southgate gave credit where due. “Tonight didn’t surprise me one bit. I knew it would be a highly motivated team. The way they press, the energy, the athleticism was exactly what I thought.”

Read More: The History Behind the U.S. and England’s World Cup Rivalry

Indeed, it was Team USA that started the brighter side. Juventus winger Weston McKinnie—hair dyed red, white and blue—terrorized England defenders and Chelsea forward Christian Pulisic ventured deep to disrupt the England lines, spraying the ball crisply to each wing. But soon England asserted their authority with a neat passing move down the right wing which resulted in a shooting chance for captain Harry Kane, but was deflected.

After a ragged quarter-hour of sustained pressure, Team USA came back into the game. At 16 minutes, McKennie crossed for Haji Wright, who headed narrowly wide. Then McKinnie blazed a shot over the bar from a low cross when he really should’ve tested Jordan Pickford in the England goal.

The game was now wide open with chances seesawing at both ends. Sergino Dest dribbled into the box at 40 minutes, only for his strike to be blocked, while Pulisic nodded wide soon after. But England had two chances to break the deadlock just before half-time. First, Bukayo Saka shot over from five yards after neat interplay and a cutback from the England left wing. Then Mason Mount forced U.S. goalkeeper Matt Turner into a smart save with a powerful low drive.

In their match against Wales, the USMNT had 56% of possession, though Tim Weah’s solitary goal was their only shot on target. On Thursday, Berhalter talked about the need to “refine some of our movements” and “get the ball in the penalty box a little bit quicker.”

Enter Yunus Musah. Against Wales, the 19-year-old became the youngest U.S. player to have played at a World Cup. Born in New York City to Ghanaian parents, he grew up mainly in the U.K. and Italy—in fact, he made more than 30 appearances for youth England teams—and was eligible to pay for all four nations. At the time of the last meeting between these teams—a 3-0 win for England in November 2018, during which seven of the current U.S. squad were playing—Musah still represented England youth teams, often as captain.

Oh, how England must regret losing him. Musah was a formidable presence prowling across the center of the park, disrupting the England midfield, stealing possession and breaking forward with menace. He hit a rasping shot at the 27 minute-mark that was unfortunately straight at Pickford. Just after the half-hour mark, McKennie did a neat drawback and turn by the half-way line, sprinted forward and fed Musah. His inch-perfect pass to Pulisic allowed the Chelsea forward to hit a stinging left foot shot that struck the top of the England goalpost.

Speaking before the match, Team USA captain Tyler Adams noted how much Major League Soccer (MLS) had improved since he plied his trade with the New York Red Bulls. Yet Berhalter has preferred fielding members of his squad based overseas. Against Wales, all but one of his starters represented clubs in Europe—the highest number ever for the U.S. in a World Cup match. (The only MLS representative was Walker Zimmerman, who unfortunately gave away the late penalty for a foul on Gareth Bale.) On Friday, it was again ten of the 11 starters who played overseas, though with Haji Wright of Turkey’s Antalyaspor replacing Norwich City’s Josh Sargent.

Team USA emerged stronger after the break. A flurry of USMNT corners on the hour mark kept England pegged back in their own box, while Pulisic also had a couple of shots blocked. Berhalter brought on Dortmund forward Giovanni Reyna and Leeds United’s Brenden Aaronson for the final quarter-hour but neither could decisively affect the game. England almost stole the points in stoppage time when Kane sent a powerful header from a free kick wide, but to lose would have been grossly unfair for the Americans. Group B remains delicately poised going into the final game.

On Friday, U.S. fans taunted their England rivals with chants of “it’s called soccer” for the U.K. national sport. The USMNT can be rightly proud of a tie against England. But perhaps leave out any “easy” quips.