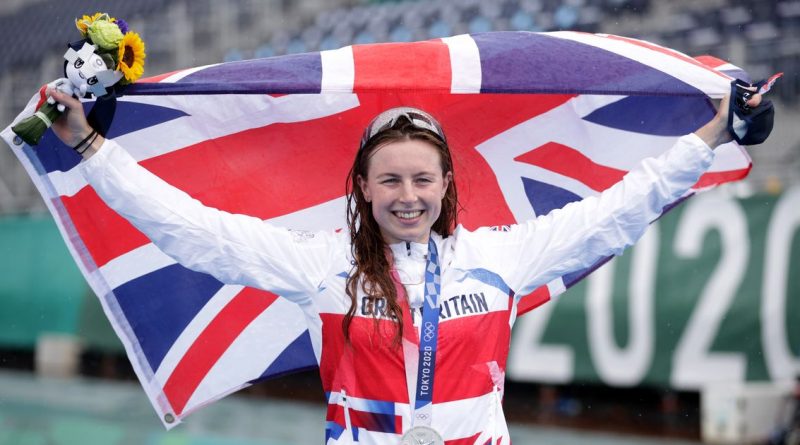 Great Britain’s Georgia Taylor-Brown overcame serious injury 12 weeks before the Olympics and a bike puncture in the race to take silver in a wet and windy triathlon.

The 27-year-old Mancunian was on crutches 12 weeks ago with a stress reaction in her thigh bone and had to undergo a fitness test just to get to Tokyo 2020.

In today’s race she suffered a puncture while in the lead pack and lost around 15-20 seconds on the eventual winner Flora Duffy, 33, Bermuda’s first ever Olympic champion.

Team GB now has three gold, four silver, and a bronze to sit 5th in the overall medal table.

Georgia had not competed in a triathlon for more than a year and had to keep her injury secret so that she did not give any advantage to the rest of the field.

She did a little jig on the podium and joked with Flora as the national anthem played for her gold medal, as Bermuda is a self-governing British overseas territory.

Under its 1968 constitution, the British monarch, represented by the governor, is the head of state.

As rain poured down thanks to the tropical storm which arrived in Tokyo this morning, Georgia said: “I just thought ‘brilliant’ when I got the puncture, but I had to try and keep my form.

“I decided to ride on it and then had to go flat out on the first lap of the run to catch up. I am glad that I did and that paid off to get me back in the race.

“I had planned for hot weather, so the rain did not favour me after the injury. Without the injury, it may be that I could have hung in there.

“But I don’t think that I would have had the speed that Flora had today.” She added: “I was two weeks on the crutches 12 weeks ago, then had 10 weeks of recovery with the last six weeks’ running.

“Doing the fitness test to get here was probably more stressful than today – I had to prove that I was fit to compete.

“It was good to hear God Save the Queen on the podium!”

Flora had dreamt of being an Olympic champion ever since she took up the sport as a little girl in Bermuda.

“It was something that I wanted not just for myself but for my country,” she said.

“It is a small island with only 65,000 people but there is a strong triathlon community which is well organised. From an early age, I would go to the US to compete and I knew that I wanted to race professionally, go to the Olympics and be an Olympic champion.

“There was a lot of pressure and expectation coming in. I was overwhelmed as I came down the finishing straight.”

Team GB’s Jess Learmonth, who finished ninth, paid tribute to Georgia, and said that she had overcome so much to get her silver medal.

American Katie Zaferes took bronze. Duffy was awarded an OBE in 2018. The only previous Olympic medal for Bermuda was a bronze for boxer Clarence Hill in Montreal in 1976.