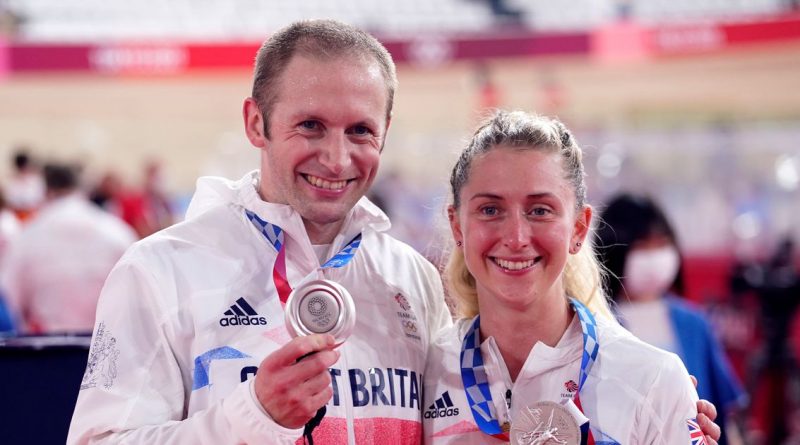 Britain’s incredible athletes boosted the nation’s pride today with the best Olympic medals haul in one day so far at Tokyo 2020.

And 19-year-old Keely ­Hodgkinson took silver in the 800 metres after racing into a second place finish from fourth.

Jason said of his record: “It’s really special. Every time you come back, it gets harder. We rolled the dice and just went for it.”

What have you most enjoyed about Team GB’s Olympic success? Have your say in the comment section

Jason and Laura with their medals
(

The 33-year-old now has eight medals, six gold and two silver, pipping fellow cyclist Bradley Wiggins – who has five gold, two silver and a bronze – to the top spot.

Keely broke down in tears at the end of her race and ­dedicated her medal to mum Rachel, dad Dean, sisters Tilly, 15, Jessica, 12, and 17-year-old brother Sam back home in Wigan.

Bristling with pride, the beaming runner said: “This is not my medal, it is our medal.

“I can’t wait to see them, it is going to be great.

“The whole thing is just cloud nine, this is the biggest stage in the world and I am still a junior.

“This is what I have dreamed of. I always wanted to be the best in the world.

“It means so much.

“Thanks to everyone who has supported me from home.”

Dean and Rachel, both 51, told how the family became emotional when their daughter dedicated her silver win to them.

Rachel said: “That was lovely. It set us off crying.

“It was a very emotional moment. It meant a lot.”

“We have spoken to her briefly and she is buzzing.

“She was ­absolutely ecstatic.”

Keely finished the race in 1:55.88, beating the 26-year-old British record held by Kelly Holmes, who wished her good luck.

She ran in her “lucky spikes” adorned with messages from family and friends.

Silver medalist Keely Hodgkinson as a child as a youngster, right
(

The student was destined for Olympic glory after her first ever race at primary school at the age of nine – when she was so fast she lapped all her ­classmates on a cross-country run.

Jason’s wife Laura, 29, also took silver at the Velodrome in the women’s team pursuit with Katie Archibald, Neah Evans and Josie Knight after a close race with winners Germany.

Josie, 24, from Dingle, Ireland, said: “Last year I didn’t expect to be here so to be on the start line with these girls
is incredible.”

Jason and Laura, from ­Cheshunt, Herts, have 13 medals between them.

Sailor Giles Scott took gold in the men’s Finn class, a race we have now won for six consecutive games.

The 34-year-old was guaranteed a medal going into the double-points decider.

But he clinched the win in the final 20 metres.

Giles, from Huntingdon, Cambs, said: “I made it by the skin of my teeth, it was properly to the wire, it was really tight.

“I tried to stay relaxed, I’ve never been involved in a boat race as close as that.”

Dylan, 33, from Market ­Harborough, Leics, added: “I dreamt last week this would happen.”

John Gimson and Anna Burnet struck silver in the World Nacra class to cap one of the most remarkable days in British Olympic sailing history.

Great Britain’s John Gimson and Anna Burnet on the podium
(

Harrogate’s Jack Laugher, 26, bagged the third Olympic medal of his diving career with bronze in the men’s three-metre ­springboard final.

He adds that to his gold and silver.

The eight-medal haul was our best day since the nine won on day 11 in Rio five years ago.

Pat McCormack toasts his success in the ring
(

Boris Johnson tonight praised the athletes for their achievements.

The PM said in a message filmed at Downing Street: “Every morning we are getting up and we are watching your incredible performances at the Olympics and we are thrilled.

Olympic gymnast Max Whitlock, with his wife Leah and daughter, as he arrives back at London Heathrow Airport today
(

Get all the latest sports news straight to your inbox. Sign up to one of the Mirror’s newsletters

“You’re putting a smile on the faces of millions of people across this country with quite ­sensational performances in the pool, in the gymnastics, in the eventing, BMX.

“And I just want to say congratulations, keep going, we’re all rooting for you.”