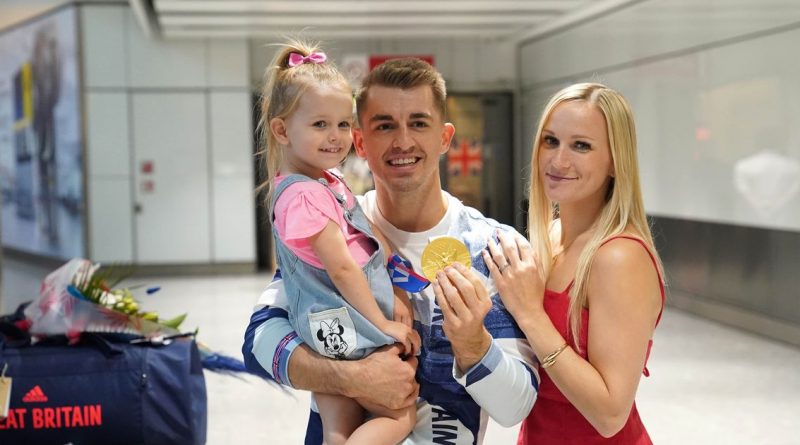 Max Whitlock has returned to the UK after retaining his Olympic pommel horse crown with a sensational performance in Tokyo.

He was met by his wife and young daughter as he landed at London Heathrow on Tuesday evening, and was clearly delighted to be back home.

The 28-year-old won gold in Rio but was under a different kind of pressure this time around after he was handed the difficult job of going first in the final.

Fortunately, the three-time world champion put on a faultless display to score a huge 15.583 – a score which competitors failed to match.

That marked his third Olympic gold and his sixth medal in total after winning two bronzes during the 2012 games in London.

Max Whitlock with his wife and daughter at Heathrow
(

Speaking to the BBC after his success on Sunday, he said: “I feel lost for words. I am completely overwhelmed and it feels kind of surreal.

“I had seen the other sports, gold medals flowing in and I wanted to do the same here. Incredible journey.

“The pressure was there and I could feel it. Experience pays a lot in situations like this.

Whitlock is the latest GB hero to arrive back home after the record-breaking swimmers landed on Monday evening.

Adam Peaty, Duncan Scott and Co, brought home eight medals from the meet in the pool, a tally only bettered by the United States.

Meanwhile, it was another brilliant day for Team GB, who earned another eight medals, including two golds in the sailing.

Jason Kenny became Britain’s most decorated athlete, but had to settle for a silver after the men’s cycling team were beaten in the sprint finish by Netherlands.

In the women’s team pursuit, GB also finished second on the podium when Germany smashed the world record on two occasions, including in the final.

Whitlock with his gold medal
(

Keely Hodgkinson earned GB’s first athletic medal of Tokyo 2020, with the 19-year-old running a British record to finish second in the women’s 800m.

Hodgkinson beat the time that was set by Dame Kelly Holmes in 1995, but her 1m58s was only enough for second, with American Athing Mu topping the podium.

“The pressure was there and I could feel it. Experience pays a lot in situations like this.

How many medals have Team GB won at Tokyo 2020? Olympics medal table in full
Team GB set cycling team pursuit world record – then crash into each other celebrating