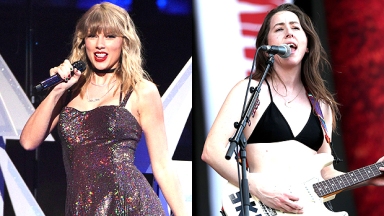 
Taylor Swift popped up at the HAIM show in London! The singer, 32, appeared on stage to perform with her pals Este, 35, Danielle, 32, and Alana, 30, at their London show on Thursday, July 21. She sang a brief snippet of her classic hit “Love Story” at the iconic O2 Arena, along with a rendition of “Gasoline,” which is the group’s collaboration with Taylor.

taylor swift and haim together is one of my fav things x pic.twitter.com/oUQkMthRvM

The GRAMMY winning songstress performs live far and few between these days, but she shared it was “nice” to be on stage again. “I haven’t been on stage in a very long time. It’s nice…it’s nice, it’s very nice,” she said to the screaming crowed. “When I heard my girls were playing in London at the O2, I thought, I’m going to have to see that. And it looks like there’s about 20,000 other people who also thought that,” Taylor shared.

“So we had a thought. If we were to do some sort of mash-up, we could possibly maybe get you to sing the loudest you have sung all night – which is a big challenge because you have been singing very loudly – extraordinary work,” she said before diving into the songs. As usual, she looked gorgeous as she wore a black crop top and leather pants, keeping her hair in a high braid.

The 1989 singer has been keeping a low profile recently, but was spotted in London just days ago with longtime boyfriend Joe Alwyn. Taylor and the actor, 31, twinned in blue shorts as they enjoyed cool beverages on July 14 while strolling through a park.

Taylor last performed live at the premiere of her “All Too Well” short film at the Tribeca Film Festival in June 2022 (yes, the re-recorded 10 minute version). The lengthy track was also performed in Nov. 2021 on Saturday Night Live, shortly after she dropped Red (Taylor’s Version).

Most recently, she released the song “Carolina,” produced by her longtime collaborator and friend Aaron Dessner of The National. Dessner and his brother were heavily involved in the production of her album Folklore and follow-up Evermore. The tune is the official theme song for the new movie Where The Crawdads Sing, produced by Reese Witherspoon.