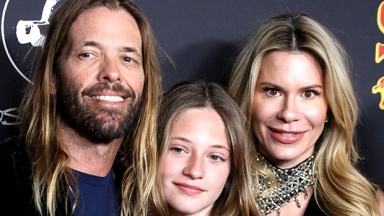 
Taylor Hawkins was survived by his wife Alison Hawkins and their three children when he passed away at the age of 50 on March 26. The Foo Fighters’ drummer was found unresponsive in his hotel room in Bogota, Colombia during a South American tour with the rock band. There were few details on how Taylor died after the news broke, although based on preliminary findings, it appears he may have overdosed, according to TMZ. While the investigation into what caused his death is still ongoing, the Foo Fighters said in a statement that it was a “tragic and untimely loss.” Taylor’s last performance with the band was on Sunday (March 20) at a concert in San Isidro, Argentina.

While Alison and the children have yet to make a public statement on the tragic passing, the love for their husband and father are undeniable. Find out more about the Taylor and Alison’s three kids — Oliver, Annabelle and Everleigh — here.

Taylor married his longtime partner and illustrator Alison in 2005. Almost two years later, they welcomed their first child together, Oliver Shane. He goes by Shane, although he was named after his father, as Taylor’s first name is also Oliver. In 2018, a then 12-year-old Shane joined his pop and Foo Fighters’ lead singer Dave Grohl to perform a cover of the Rolling Stones’ “Miss You,” according to Spin. Grohl was on guitar, Taylor on vocals, and Shane took over on the drums! At the time, Taylor joked to ET Canada that Shane was “priming himself to take over my job in about 10 to 15 years.”

Taylor also once admitted, during a 2020 interview with Joe Daly, that he had written a sweet song about Shane with emotional lyrics like “Son of mine/you ready for the great big world…” However, it was never released on an album because Shane hilariously opposed to it.

As Taylor told the outlet, “It got all the way to possibly being on the record, so I played it for my son and he goes, ‘If you put that on your record, I’m gonna punch you in the face! If you’re gonna write a song about me, it’s gotta sound like Metallica! I don’t want some wimpy a**, p*ssy song about me, dad!’”

However, it was during the the tribute concert for his late father where Oliver got to really show off his skills. In September 2022, the teen stepped into his late father’s shoes to perform a rendition of the Foo Fighters’ classic song “My Hero” at his father’s tribute concert in London. Taking over the drums, the 16-year-old prodigy played with passion alongside Dave Grohl during a night filled with all-star artists remembering the late Taylor.

Annabelle is Taylor and Alison’s second child, and she just turned a teenager with her recent 13th birthday! After Shane put a stop to his own song being on an album, Annabelle was ready to take her father up on having a ditty about herself! Taylor told Joe Daly that Annabelle said, “You have to have a song about me!”

“I was like, ‘Well, I don’t know,’” Taylor continued. “You’re the middle child and you’re acting like a middle child right now, seeking attention and approval. Which I understand because Shane’s always in trouble and the baby’s (daughter Everleigh) cute as f**k, so you’re in the middle. But you’re like my twin, too.’ She really is. So I thought, ‘Why don’t I just call the song ‘Middle Child’?’”

The song includes lyrics like “My little twin I’m here with you/Stay close and we will see it through/How I love you middle child/I see angels when you smile.” It was chosen in the U.K. as the lead single off Taylor’s solo album called Get the Money. “‘Middle Child’ is more of an English dandy song, almost like a T. Rex. Thin Lizzy, glam, early-Seventies glam thing. So they loved it in the UK and I told my daughter the other day, ‘England wants that to be the single!’” Annabelle, no doubt, was reportedly ecstatic.

Not much is known publicly about the youngest child of Taylor and Alison. Everleigh, now 8 years old, actually appeared in the video for Annabelle’s song “Middle Child.” The young tot can be seen using a remote to flip through channels on a television in the beginning of the clip.