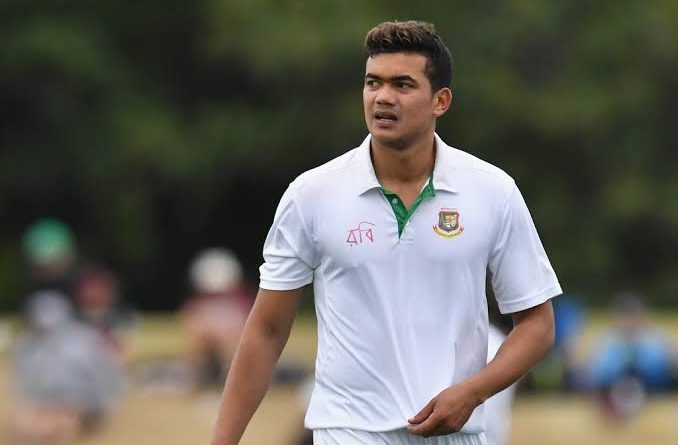 
Bangladesh pace bowler Taskin Ahmed is doubtful to participate in the two-match Test series against West Indies next month.

Bangladesh is scheduled to tour the West Indies to play two Tests, three T20 Internationals, and as many ODI matches in the June-July period.

Taskin suffered a shoulder injury in the first Test against South Africa in Durban last month. He was ruled out of the second Test in Port Elizabeth and wasn’t named in the squad for the Bangladesh Tests.

We can’t be certain if Taskin Ahmed will miss the whole series: BCB physician

Bangladesh Cricket Board (BCB) chief physician Debashish Chowdhury said Taskin will be taken for the rehabilitation process for four weeks but remained unsure about the pacer’s recovery.

”We will go for conservative management for the next four weeks and see what happens,” Chowdhury told Cricbuzz.

“We can’t be certain if he will miss whole series. We can’t say a month before the series whether he will be ruled out. The team will leave during the first week of June so it may be that we will think of his inclusion for the shorter versions,” he added.

Taskin has represented the Bangladesh Test side in 11 Tests and claimed 25 scalps at an average of 55.92. He was part of the team that won a historic Test match against New Zealand early in January in Mount Maunganui.

Taskin played a supporting role to Ebadot Hossain, who picked 6/ 46 in the second innings.

Taskin cleaned up New Zealand stand-in skipper Tom Latham in the start and later dismissed Rachin Ravindra and Tim Southee as Bangladesh went on to win their first Test in New Zealand by eight wickets.

Bangladesh is presently playing Sri Lanka in the two-Test series at home. The hosts trail by 321 runs at the stumps on Day 2 of the first Test in Chattogram.

Mahmudul Hasan Joy (31) and Tamim Iqbal (33) are currently batting as Bangladesh will resume the third day at 76/0 with all wickets intact.