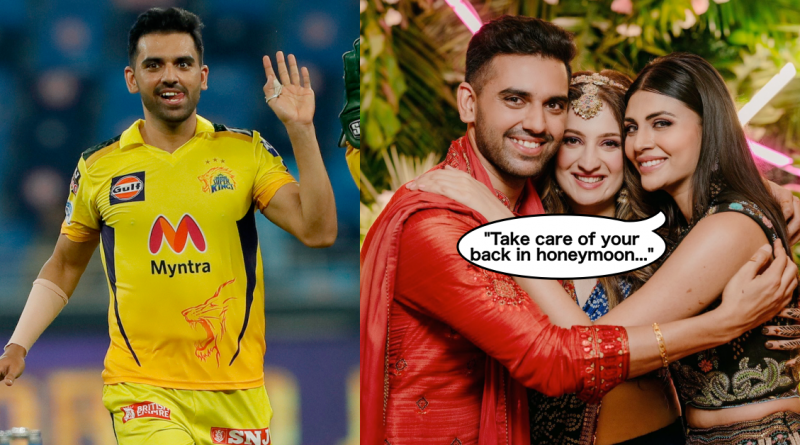 
Deepak Chahar got married to his fiancée Jaya Bhardwaj on June 1, 2022, in Agra and as he went off for his honeymoon, he received a cheeky wish from his sister Malti. The India pacer is currently out of action due to a bad back and Malti reminded him to take care of it.

Deepak Chahar had proposed Jaya Bhardwaj at the end of CSK’s last league match in the IPL 2021 season. However, Chahar couldn’t play in the IPL 2022 despite CSK buying him for INR 14 crores, their most expensive buys in recent history.

This was because Chahar had gotten injured ahead of the IPL 2022 when he injured his quad during the T20I series against the West Indies at home just before the IPL and was sent to the National Cricket Academy (NCA) for rehab.

He was reported to be fit for the second half of the IPL 2022 giving CSK fans some hope as the franchise had lost 6 out of their 8 matches in the league stage. However, their hopes were dashed as it was later revealed that after recovering from the quad injury, Chahar injured his back during rehabilitation and will be out for 4-6 months.

This meant that he missed not only the IPL 2022 and subsequent India matches, but his injury put him in doubt for the T20 World cup 2022 which is to be held in Australia in October this year.

Meanwhile, Deepak Chahar utilized his time off cricket in a good way and got married to Jaya in Agra in presence of family members and friends.

His sister Malti took a cheeky jibe and reminded him that he has a bad back and with a World Cup coming up, she wanted Deepak to make sure he doesn’t hurt his back during his honeymoon.

“Ab ladki hui humari….Wish you guys a very happy married life @deepak_chahar9  please take care of your back during your honeymoon..we have World Cup ahead,” she posted.