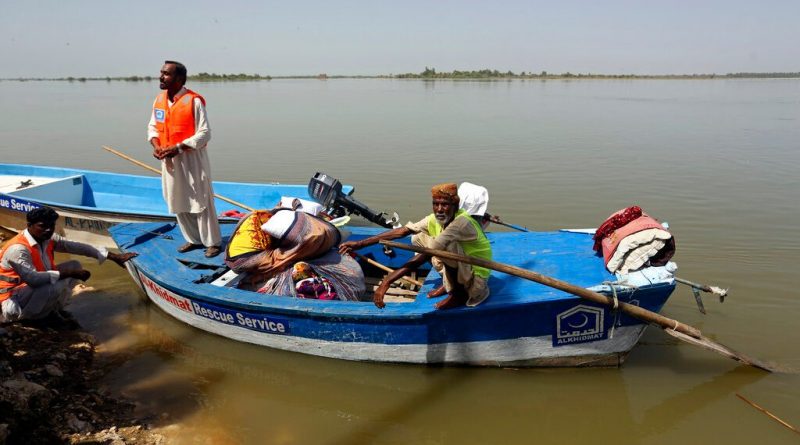 
ISLAMABAD — More flooding is expected in southern Pakistan, where Lake Manchar swelled from unprecedented monsoon rains that began in mid-June, officials warned on Sunday. The deluge has so far killed nearly 1,300 people.

Meteorologists predicted more rain in the region in the coming days and authorities urged villagers in the Jamshoro and Dadu districts of Sindh province near the lake to evacuate. The rising waters reached dangerous levels and posed a threat to a protective dyke and embankment, they said. The lake, located west of the Indus River, is the largest natural freshwater lake in Pakistan and one of the largest in Asia.

Fariduddin Mustafa, administrator for the Jamshoro district, said Sunday that officials made a cut into the lake’s embankment to allow excess water to escape and ultimately flow into the Indus. Still, the water continues to rise, he said.

Parts of Dadu district have already been flooded, officials said.

″After we assessed water levels reached (a) dangerous level … and there was fear that the embankment of the lake might be caved in at any time, the administration decided to make a cut on the Bagh-e-Yousuf side to avert any uncontrollable flow of water,” he said.

Sharjil Inam Memon, information minister for Sindh province, explained that the cut was made to protect the nearby city of Sehwan and the town of Bhan Saeedabad, with a combined population of half a million people. The diverted waters instead will affect villages in the region, with a sum population of 150,000.

The Pakistani military said in a statement Sunday that army engineers were engaged in enforcing the banks of Lake Manchar.

The development comes a day after Pakistan appealed again to the international community for aid to victims of the unprecedented flooding from monsoon rains that have left nearly 1,300 people dead and millions homeless around the country. Planes from multiple countries have been bringing supplies to the impoverished country across a humanitarian air bridge.

Multiple officials and experts have blamed the unusual monsoon rains and flooding on climate change, including U.N. Secretary-General Antonio Guterres, who last week called on the world to stop “sleepwalking” through the deadly crisis. He will visit Pakistan on Sept. 9 to tour flood-hit areas and meet with officials.

In its latest report, Pakistan’s National Disaster Management Authority put the death toll since mid-June — when monsoon rains started weeks earlier this year — at 1,290 as more fatalities were reported from flood affected areas of Sindh, Khyber Pakhtunkhwa and Baluchistan provinces. The report said 453 children were among the dead.

Prime Minister Shahbaz Sharif, who is visiting flood-affected areas and relief camps daily, tweeted Sunday that as Pakistan is battling its worst climate-change-induced calamity and that children were among those most adversely affected.

“With over 400 (children) dead they make up one third of overall death toll. Now they are at even greater risk of water borne diseases, UNICEF and other global agencies should help,” Shahbaz said.

The authority said relief and rescue operations continued Sunday with troops and volunteers using helicopters and boats to get people stranded out of flooded areas to relief camps where they were being provided shelter, food and health care.

Scores of relief camps have been set up in government buildings servicing tens of thousands of people while thousands more have taken shelter on roadsides on higher ground.

Hira Ikram, a physician at a camp established by Britain’s Islamic Mission in Sukkur charity said medical professionals are seeing scabies, gastrointestinal infections and fever as more common occurrences at the camp.

Alkidmat Foundation, a welfare organization, said its volunteers were using boats to deliver ready-to-eat meals and other help for residents as well as animal feed on a small island in the Indus. The group was also distributing food and items needed by those left homeless and living by the roadside.

In the country’s northwest, in Khyber Pakhtunkhwa, the provincial disaster management authority warned of more rains, possible flash floods and land slides in the coming week in Malakand and Hazara districts. Taimur Khan, spokesman for the authority, urged residents Sunday not to go to any of the areas already flooded in recent weeks.

According to initial government estimates, the devastation has caused $10 billion in damage but Planning Minister Ahsan Iqbal said Saturday “the scale of devastation is massive and requires an immense humanitarian response for 33 million people.”

The renewed request for international aid came as Pakistan has received 35 planeloads of relief goods from Turkey, China, the United Arab Emirates, France, Uzbekistan and other countries. More planes are expected in the coming days. The latest cargo flight landed Sunday evening at Lahore airport, with tons of relief goods from the UAE.

Two members of Congress, Sheila Jackson and Tom Suzy, were expected to arrive in Pakistan on Sunday to visit the flood-affected areas and meet officials.