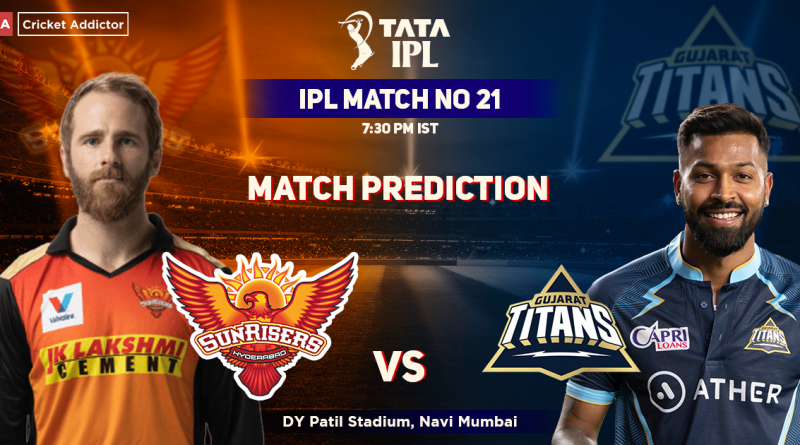 Gujarat Titans continued with their winning streak as they defeated the Punjab Kings in the last game. Gujarat Titans have won all the three games the side has played and are a confident unit.

Kane Williamson, SunRisers Hyderabad’s skipper made runs in the last game, but he struggled. He will have to set the state opening the batting with Abhishek Sharma who played a match-winning knock against CSK. Nicholas Pooran, Aiden Markram, and Rahul Tripathi will need to contribute in the middle order against a good bowling attack that the Titans have. Shashank Singh and Washington Sundar will be tasked with the big-hitting down order.

Bhuvneshwar Kumar needs to get his rhythm back as he has bowled ordinarily with the new ball. He must strike early sharing the ball with Marco Jansen. Washington Sundar is doing well, and he will look to keep the Gujarat Titans’ batsmen quiet in the middle overs with T Natarajan. Umran Malik must bowl well in his role as the 5th bowler of the side.

Few would have expected the Titans to win three games in a row, but Hardik Pandya’s side has done so and becomes the biggest newsmaker of the season. In a sensational run chase, the side pulled out a victory from nowhere against the Punjab Kings. The last ball win has added new steam to the side, and they would look to continue with the same efforts as they take on Sunrisers who have too many problems up their sleeves.

Shubman Gill was unlucky to have missed out on a well-deserved hundred in the last game and he would look to offer a rock-solid start with Matthew Wade. In the middle order, Hardik Pandya would have to lead the charge with newcomer Sai Sudarshan. Rahul Tewatia is looking at his best down the order and his heroics in the last game would be remembered for a long time. He will look to make use of the long handle with David Miller, Abhinav Manohar, and Rashid Khan.

The Gujarat Titans have a strong bowling attack, and the side would like to see tight spells from Mohammad Shami and Hardik Pandya who bowled poor lines in the last game. Rashid Khan had done well for his reputation and the side would expect wickets from him and Lockie Ferguson in the middle overs. Darshan Nalkande looked nervous against Punjab and the onus would be on him to deliver a good spell in this game.

SunRisers Hyderabad won their first game of the season against Chennai after losing to Rajasthan and Lucknow. But the side has still a long way to go. They have their captain Kane Williamson looking in poor shape and the side desperately needs much-needed runs from him.

Gujarat Titans are in outstanding form with three wins in a row. They have a very strong batting line-up and this would put them ahead in the contest.