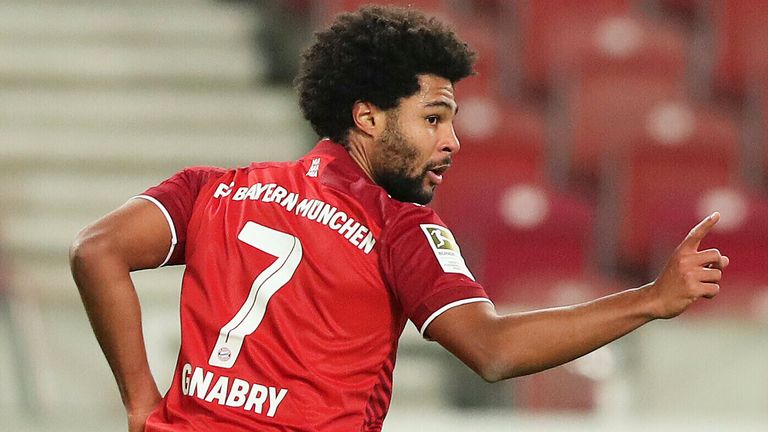 
Serge Gnabry scored a hat trick as Bayern Munich stretched their lead in the Bundesliga to nine points with a 5-0 hammering of Stuttgart.

Before the game, Bayern coach Julian Nagelsmann told Sky in Germany it was certainly not time to congratulate his team on the title already, but the victory showed just how dominant they can be.

Stuttgart survived an early string of chances for Bayern to score, and even created a couple of their own, before Gnabry curled the ball into the top-right corner in the 40th minute to open the scoring.

Thomas Muller set up Gnabry for a second goal just after half-time, before a run of three goals in five minutes finished off Stuttgart.

Robert Lewandowski chipped the ball over the goalkeeper in the 69th minute, before tapping in a Gnabry cross three minutes later. Soon after, Gnabry completed his hat-trick when a cross from Muller was palmed into his path by the ‘keeper.

The ga me was played in an empty stadium because of state-level restrictions following a rise in coronavirus cases.
Bayern forward Kingsley Coman went off with a possible hamstring injury in the first half.

Stuttgart stay 15th in the table after a defeat which brought Pellegrino Matarazzo’s team back down to earth following a 2-0 upset victory over Wolfsburg on Saturday.

Stuttgart travel to Cologne on Sunday (4.30pm), while Bayern host Wolfsburg on Friday (7.30pm), with both Bundesliga games live on Sky Sports.