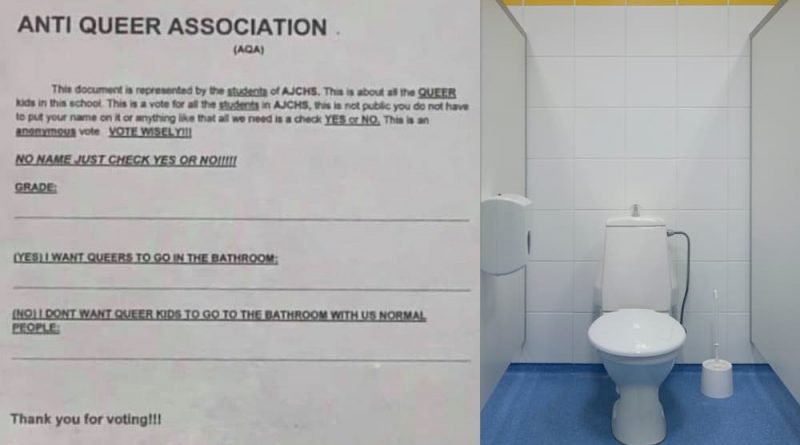 The group of students called themselves the Created by the “Anti-Queer Association (AQA). (Twitter and Envato)

High school students in Illinois have been issued a survey asking if “queers” should be able to use the bathroom alongside “normal people”.

The survey was distributed at Anna-Jonesboro Community High School in Anna, Illinois, on Wednesday (20 October).

Created by the “Anti-Queer Association (AQA)”, the survey reads: “This document is represented by the students of AJCHS. This is about all the QUEER kids in this school. This is a vote for all the students in AJCHS, this is not public you do not have to put your name on it or anything like that all we need is a check yes or no.

“This is an anonymous vote. VOTE WISELY!!!”

Respondents are then asked to give their school grade, and tick either: “Yes, I want queers to go in the bathroom” or, “No, I don’t want queer kids to go to the bathroom with us normal people”.

According to NBC News, Rob Wright, the school’s superintendent, said that just a few copies were handed out before the school caught wind of the anti-LGBT+ survey.

Wright said that disciplinary action had been taken against the “very limited” number of students involved.

He added: “I really can’t give any specific information regarding any individual students or what those measures were taken, but I can tell you that this type of harassment is taken very seriously by the district.

“We’re not going to tolerate it under any circumstances.”

@kfvsnews as a graduate of Anna Jonesboro high school that also happens to married to a person of the same sex, I am appalled that not only was there no coverage of the homophobic show put on at the board meeting last night over bathrooms but today no coverage about this pic.twitter.com/IkhGrBBAbQ

According to The Southern Illinoisan, just two days before the survey was handed out, on 18 October, the school board met to discuss trans students using the correct school bathrooms for their gender after several parents posted transphobic content to social media regarding the matter.

The school board confirmed that in line with the US Department of Justice ruling that Title IX requires schools to allow trans students to use the correct bathrooms, and the Illinois 2019 Equitable Restrooms Act, it would allow trans kids to use bathrooms in the same way as any other student.

The decision caused outrage from anti-trans parents, with one mother even posting on Facebook that she was “about ready to pull the kids out of school”.

Tara Bell, facilitator of Social Action for Southern Illinois, told the publication that parents were circulating the myth that trans kids made school bathrooms “unsafe” for other students.

She said: “In reality, there have been no documented instances of violence, assault or bullying by transgender individuals in restrooms, either in schools or other public places.

“This concept is a myth. But imagine what a student goes through daily; being forced to access a restroom or locker room based on their gender assigned at birth as opposed to the gender of their true self sets off a spiral of issues.

“The student will avoid eating or drinking all day, making participation and focus difficult. Overall grades can begin to slip.  Students will sit out of physical education classes, facing penalties for non-participation.”

Local LGBT+ centre Rainbow Café took to social media to reach out to queer students who may have been affected by the hateful survey.

It shared on Facebook: “The board at Rainbow Cafe is aware and is watching the transphobic, anti-queer sentiments at Anna-Jonesboro High School.

“We are working with statewide agencies to determine the best course of action to make the biggest impact for the queer youth in that high school.

“For any youth that may be reading this: please know that you are loved, that you belong, and we are here supporting you.”