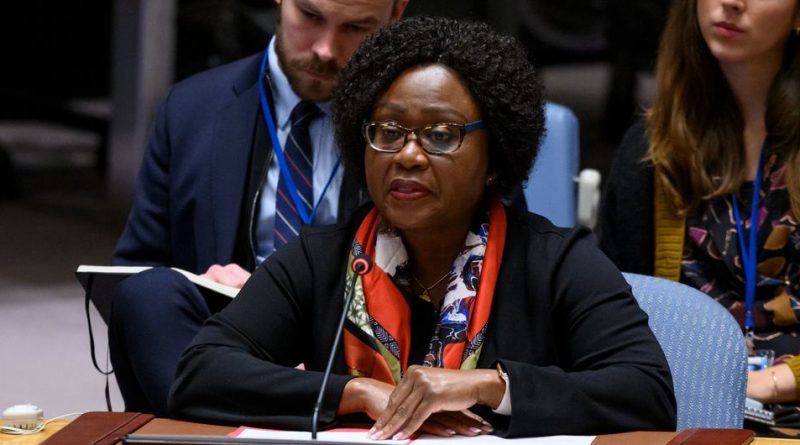 
Presenting the Secretary-General’s latest report on the issue, Martha Pobee, an Assistant Secretary-General in the Department of Political and Peacebuilding Affairs (DPPA), warned of a shifting situation that will require greater response.

The decline in incidents is the result of concerted efforts by national authorities, supported by regional and international partners, both on land and at sea.

Actions such as increased patrols, deployment of naval assets, enhanced coordination, as well as convictions, have served as deterrents to criminal activity.

However, piracy in the Gulf of Guinea has morphed over this period, Ms. Pobee reported.

“Pirate groups are adapting to changing dynamics both at sea and in coastal areas,” she said.

“In this respect, the recent decrease in instances of piracy may in part be attributable to the shift by criminal networks to other forms of maritime and riverine crime, such as oil bunkering and theft, which they likely view as both less risky and more profitable”.

She stressed that it was imperative for States and their regional and international partners to accelerate efforts to establish security in the Gulf of Guinea, as outlined in the Yaoundé Code of Conduct, signed in June 2013.

Ms. Pobee pointed to some of the achievements since then, such as the recent signing of an agreement to establish a Multinational Maritime Coordination Centre (MMCC) for a zone that covers Cabo Verde, Gambia, Guinea-Bissau, Mali and Senegal.

A maritime exercise involving 17 of the 19 countries that border the Gulf of Guinea, as well as eight international partners, was also conducted last month over an area stretching from Senegal to Angola.

She also underscored the UN’s continued political and technical assistance to States, including through agencies such as the UN Office on Drugs and Crime (UNODC) and the International Organization for Migration (IOM).

“At present, there is no firm evidence to suggest any potential or possible linkages between terrorist and pirate groups,” she told the Council.

“However, addressing the underlying social, economic, and environmental challenges faced by communities in the region will ultimately serve to contain both threats.”

Ms. Pobee said the UN is also strengthening collaboration with international financial institutions to support countries in addressing the underlying causes of fragility and security.

With the 10th anniversary of the Yaoundé framework approaching, UNODC chief Ghada Waly pointed to the opportunity to dedicate greater attention, resources and action to supporting maritime security and the rule of law in the Gulf of Guinea.

She urged the international community to help governments develop their capacities and legal frameworks, with domestic laws that criminalize piracy and enable prosecution.

“We must improve investigation and prosecution capacities, to give teeth to enforcement efforts and reach a ‘legal finish’ to every case pursued,” she said.

Ms. Waly highlighted the need to be quick to respond to the shifting trends in piracy to “prevent the threat from simply taking a different form”.

She called for developing a regional framework to expand cooperation and urged vigilance against the possibility of terrorist groups in the Sahel linking up with criminal enterprises in coastal regions.

The UNODC Executive Director also underscored the crucial need to address the root causes of piracy in the Gulf of Guinea by working with vulnerable coastal communities.

These populations are also dealing with challenges such as environmental degradation and biodiversity loss, fuelled by climate change and illegal fishing.

“Criminals at sea must be stopped and held accountable, but to ensure a truly sustainable response, due attention must be paid to the people who may become such criminals, the factors that drive them to it, and the people most affected,” she said.

“We must pursue community-based crime prevention strategies and engage with at-risk and marginalized youth to cultivate personal and social skills, prevent risky behaviors, and grant them opportunities.”

Ms. Waly said UNODC is supporting the development of community-based crime prevention strategies in the Niger Delta region of Nigeria, which she hopes will be replicated in other coastal communities.