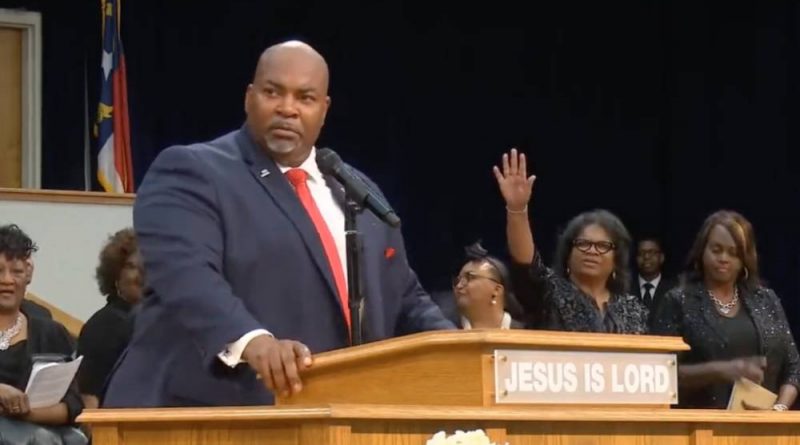 North Carolina’s lieutenant governor Mark Robinson said the trans rights movement is “demonic” in a video at the Upper Room Church of God in Christ in August. (Twitter/@RightWingWatch)

Straight people are “superior” to gay people, who serve no purpose in society, a Republican lieutenant governor has said.

Mark Robinson, North Carolina‘s second-in-command who is expected to run for governor in 2024, spoke at a church sermon in the city of Winston-Salem last Sunday (14 November).

In remarks captured on video, Robinson, who only last months faced calls to resign after calling LGBT+ people “filth”, made a slew of disparaging comments about LGBT+ people.

He questioned the “purpose” of being gay and said he doesn’t want to explain to his grandchildren what homosexuality is, something he compared to maggots and flies.

He responded with a hearty “yes”, he told the congregation.

“These people are superior because they can do something these people can’t do,” he spouted. “Because that’s the way God created it to be. And I’m tired of this society trying to tell me it’s not so.”

The Republican then compared being gay to “what the cows leave behind” as well as maggots and flies. He also said there are only “two genders”.

“You might be cut up, dressed up, drugged up ugly man or woman, but you still a man or a woman, and I don’t care who doesn’t like it,” Robinson said to a standing ovation.

After first taking to the pulpit, he sought to clarify that his role in public office is different to what he preaches.

“In America, you have the right to be a homosexual and, as an elected official, I have a duty to protect your constitutional rights, and I will,” he said.

The video was distributed Friday by a pastor from St John’s Metropolitan Community Church in Raleigh, touching off protests outside his office.

Organisers read the name of the dozens of trans people slain in the US this year, which activists say is the “deadliest” since records began.

Speaking at the protest, Vance Haywood, St John’s senior pastor, said he is “heartbroken” that Robinson has “once again has taken to the pulpit to spread a message of hate”.

“This man’s theology and religious practices are not only flawed and a perversion of the Christian tenets,” he said.

“He places countless people at risk of violent attacks and even murder every time he opens his mouth.

“Robinson has no place standing at the holy desk of any legitimate Christian church unless it is to confess his sins against humanity, seek forgiveness from the congregation and engage in repentance for his wrongdoing.”