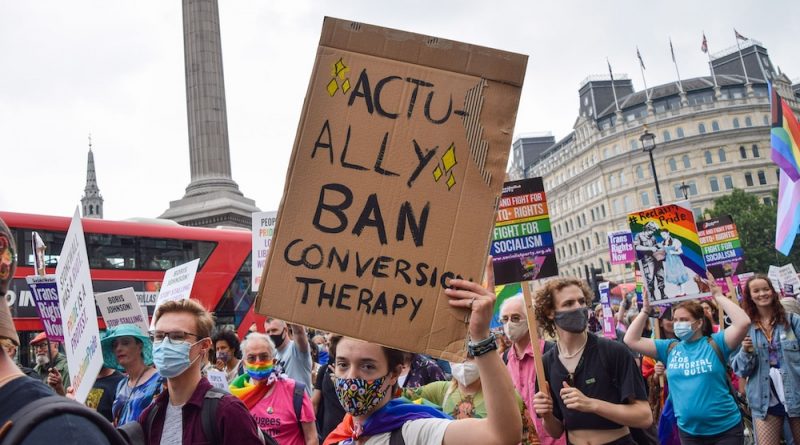 The Tories’ proposed conversion therapy ban is shot with “concerning loopholes that the government must close”, Labour lawmakers and Stonewall have warned.

On Friday (29 October), the government announced that it will allow consenting adults to undergo the debunked, dangerous practice as long as they “consent” to it.

More than three years since the ruling party promised to outlaw it, ministers finally set out proposals for how they plan to crack down on “coercive and abhorrent” conversion therapy, which has been rejected by every major medical and mental health body.

This includes prohibiting conversion therapy of all kinds in England and Wales for anyone under the age of 18, and adults who are vulnerable and unable to consent.

Such “robust” proposals, Stonewall chief executive Nancy Kelley said in a statement, are a “huge step forward to consign this practice to the history books”.

However the “loophole” that allows for “religious counselling” is chilling, she added, while shooting down the notion that conversion therapy can be consented to in any setting.

“As the proposals set out, conversion therapy is coercive and abhorrent, and does not work,” Kelley said. “You cannot change an LGBTQIA+ person from being who they are, and to try to do so causes lasting damage.

“However, there are still concerning gaps that the UK government must close, including on prayer and statutory support for victims.

“We also can’t support that the proposals allow for people to ‘consent’ to conversion therapy – a practice that is abusive cannot be consented to. If we are to truly put this shameful practice behind us, the ban must not allow for any excuses or any exemptions.”

“Consultation on banning conversion therapy must include religious settings,” he tweeted.

“I experienced this through church groups as a young man – I was desperate to change my sexual orientation and was taken advantage of as a young, vulnerable and naive 19 yr old. It clearly doesn’t work!”

This was a message amplified by Christie Elan-Cane, a British activist who has campaigned for decades for gender-neutral passports.

“Is this ‘progress’?” Elan-Cane questioned. “Hardly. Rather than ban the harmful practice of ‘conversion therapy’ the UK Govt proposes a consultation full of loopholes.”

Faith-based conversion therapy – which includes everything from “praying the gay away” through to troubling exorcisms – is the most common form of the practice.

Fifty-one per cent of people who have endured conversion therapy had it conducted by faith groups, according to the Government Equality Office’s 2018 National LGBT Survey.

“But it’s astonishing that it suggests people can ‘consent’ to these insidious practices on religious grounds.