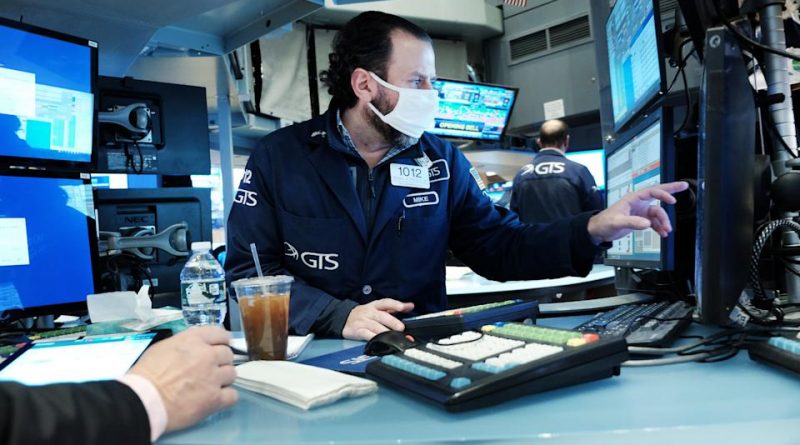 
Stocks slid Monday, with technology stocks under renewed pressure as investors anticipated higher interest rates this year and looked ahead to several economic data and earnings reports later this week.

The S&P 500 sank to add to losses after the blue-chip index closed out its first week of trading for the new year in the red. The Nasdaq Composite fell following its worst week since February 2021. The Dow also fell.

Treasury yields climbed, and the benchmark 10-year yield topped 1.8% to reach its highest level since January 2020.

“The surge in rates since early December has crushed the valuation of stocks with high growth and low margins, but a well-ordered progression of Russell 3000 stocks implies further repricing,” Goldman Sachs chief equity strategist David Kostin wrote in a note.

“We have previously shown the speed of rate moves matters for equity returns,” Kostin added. “Equities typically struggle when the 5-day. or 1-month change in nominal or real rates is greater than 2 standard deviations. The magnitude of the recent yield qualifies as a 2+ standard deviation event in both cases.”

The move higher in yields and volatility across U.S. equities came after the release of the Federal Reserve’s December meeting minutes mid-last week. These suggested some central bank officials were eyeing a quicker start to interest rate hikes and balance sheet runoff process than many market participants had expected. Goldman Sachs economists now predict the Fed will raise interest rates four times this year — or one time more than the firm previously expected — and that the central bank’s balance sheet reduction will begin in July or earlier.

Last week’s “price action in 10-years was all about what the Fed will do with its balance sheet,” Nicholas Colas, co-founder of DataTrek Research, wrote in a note. “We’ll know more on Tuesday, with [Federal Reserve Chair Jerome Powell’s] renomination hearing set for 10 a.m. One thing we’re confident about: equity market volatility is not over yet.”

“His confirmation hearing will be a chance for him to further reassure lawmakers and the public that the Fed is focused on reducing inflation in 2022,” Colas added. “We expect that to feed further market volatility this week.”

In addition to Powell’s confirmation hearing before the Senate Banking Committee on Tuesday, investors will also be looking ahead to a new inflation report on Wednesday. The Bureau of Labor Statistics will release the December Consumer Price Index (CPI) that day, which is expected to show an about 7.0% year-over-year jump in prices — or the biggest rise since 1982. And at the end of the week, big banks including JPMorgan Chase (JPM), Citigroup (C) and Wells Fargo (WFC) are each slated to report Friday morning before the opening bell.

Bitcoin prices sank on Monday as cryptocurrencies extended declines after a volatile start to the year.

The largest cryptocurrency by market capitalization saw prices fall more than 5% to below $40,000 at session lows Monday morning in New York, based on Yahoo Finance data. That marked the first time prices broke below that threshold since September. Prices steadied just below $41,000 as of 10:15 a.m. ET.

Other cryptocurrencies also saw prices sink. Ethereum, the second-largest cryptocurrency by market cap, dropped more than 3% to dip below $3,000.

Here’s where markets were trading just after the opening bell Monday morning:

Shares of athletic apparel-maker Lululemon (LULU) sank Monday morning after the company said it expected to see a hit to fourth-quarter revenue and profits due to impacts from soaring Omicron variant cases.

“We started the holiday season in a strong position but have since experienced several consequences of the Omicron variant, including increased capacity constraints, more limited staff availability, and reduced operating hours in certain locations,” Lululemon CEO Calvin McDonald said in a press statement Monday.

Shares fell about 7% in early trading. The stocks has declined by more than 9% for 2022-to-date through Friday’s close.

Here’s where markets were trading ahead of the opening bell Monday morning: