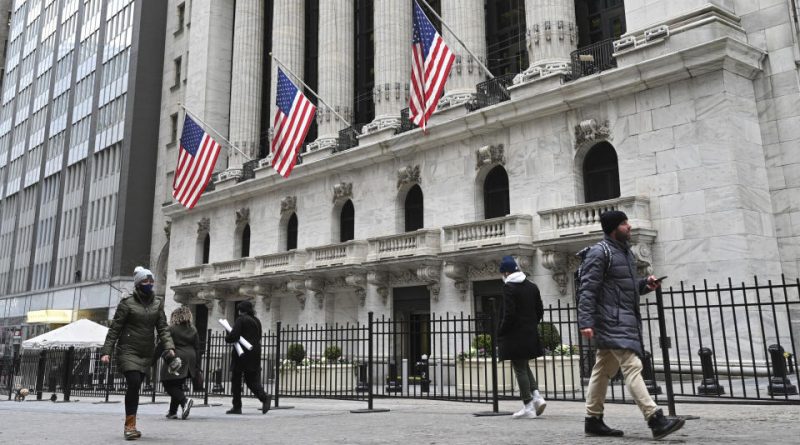 
Stock futures rose Wednesday morning as investors eyed a new report on inflation, which showed another decades-high rate of price increases across the recovering economy.

The Bureau of Labor Statistics’ December Consumer Price Index (CPI) showed prices rose at a 7.0% year-over-year rate at the end of 2021, marking the fastest increase since 1982. This matched consensus estimates, based on Bloomberg data, and accelerated from November’s already elevated 6.8% increase. On a month-over-month basis, consumer prices rose 0.5%, or slightly more than the 0.4% rise expected, to mark an eighteenth consecutive month of prices increases.

Excluding food and energy prices, the so-called core measure of consumer prices rose 5.5% in December over last year, coming in at the fastest rate since 1991.

Wednesday’s market moves came following a rebound rally on Tuesday, with markets at least temporarily finding relief in assurances from Federal Reserve Chair Jerome Powell that the central bank would step in as necessary to rein in rising prices. In Powell’s renomination hearing before the Senate Banking Committee, the central bank leader reiterated that the Fed would use its policy tools to bring down inflation.

“If we see inflation persisting at high levels, longer than expected, if we have to raise interest rates more over time, then we will,” Powell said during the hearing.

The central bank previously telegraphed it was eyeing three interest rate hikes this year to bring benchmark rates up from their current near-zero levels. However, some top Wall Street firms have predicted the Fed will raise rates four times given the current inflationary backdrop.

But though Powell doubled down on the Fed’s goal of curbing inflation and using interest rate hikes as a tool to achieve this, he revealed little further about the Fed’s plan to begin shrinking its nearly $9 trillion balance sheet. The Fed’s December meeting minutes last week suggested central bank officials were beginning to discuss drawing down the Fed’s balance sheet after nearly two years of asset purchases to help support markets during the pandemic. Powell did reiterate in his hearing he expected the balance sheet runoff process would begin this year.

“I think the biggest comment on most investors’ minds that we talk to around the world would be a ‘policy mistake’ that the Fed might be too aggressive,” Brian Belski, BMO Capital Markets chief investment strategist, told Yahoo Finance Live on Tuesday. “Mr. Powell basically came out today and said this is going to be a process … with respect to how long this is going to take, and I think that’s what’s calming investors.”

Though prospects of higher borrowing costs and tighter financial conditions have stirred up volatility in U.S. equities and tech stocks especially in recent sessions, Tuesday’s session saw a reversal, with the tech-heavy Nasdaq Composite sharply outperforming.

“The issue with tech, I would argue, is not so much one of a little extra duration exposure because growth is further away, but it’s simply one of valuation,” Simeon Hyman, ProShares Global Investment Strategist, told Yahoo Finance Live on Tuesday. “And indeed those top-heavy, largest-cap tech stocks perhaps just were a little bit expensive going into the end of last year and the beginning of 2022. But don’t completely rule out good growth stories because that is the biggest defense against inflation. It is the growth of earnings and dividends.”

By category, prices for used cars and trucks and shelter were the largest contributors to the headline increase. The used cars and trucks index rose for a third straight month and accelerated to a 3.5%. month-on-month rise in December from November’s 2.5% increase. This index was also higher by a marked 37.3% compared to the same month last year. Shelter prices rose 0.4%.

The core measure of consumer price changes, which excludes volatile food and energy prices, rose 5.5% in December over last year, representing the fastest increase since 1991. This accelerated from a 4.9% annual gain in November.

Here’s where markets were trading before the opening bell on Wednesday: