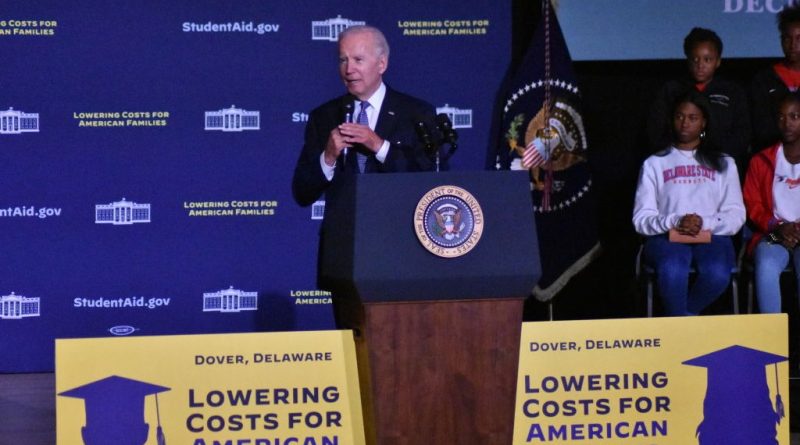 
For some borrowers, the impact of the White House’s student-debt forgiveness program may be influenced by the interpretation and implementation of tax law.

Several states may end up taxing that relief, creating a situation where borrowers have to make a payment of as much as $1,000 in the near term as a result of getting the long-term financial benefit of cancellation. On Nov. 4, Supreme Court Justice Amy Coney Barrett declined to block the forgiveness plan after two borrowers had claimed in a lawsuit it would result in them paying higher state taxes.

To understand how state tax policy might affect eligible borrowers, Bloomberg News spoke with Dorothy Brown, the Martin D. Ginsburg Chair in Taxation at Georgetown University Law Center and author of The Whiteness of Wealth: How the Tax System Impoverishes Black Americans — and How We Can Fix It.

The conversation began with the recent lawsuit brought by two plaintiffs in Indiana and took place before Coney Barrett’s decision Friday. The suit was first filed in September with one plaintiff who is a lawyer with the libertarian Pacific Legal Foundation; in response, the Justice Department said the government had taken steps to make sure that person — and anyone else who wanted to — could opt out of the program. The latest suit similarly asked the Supreme Court to act to prevent the cancellation from taking effect.

What do you make of the legal challenge that posits that state taxes will negatively impact borrowers whose loans are forgiven?

More importantly, there’s this legal doctrine that says you can’t sue on any issue if you don’t have something called standing, which means there’s a specific harm you are alleging. There are longstanding cases that basically say you can’t sue as a taxpayer just because your taxes are going to go up. Because if that was the case, you could imagine the lawsuits against the 2017 Trump tax cuts. The argument that “I’m having my taxes go up” flies in the face of lots of precedent.

Federal law allows this debt relief to be tax-free because of the American Rescue Plan that the president signed in March 2021. In any state that immediately conforms to federal law, there will be no taxes on this.

It’s true 56% of Black Americans live in the South. But of the population whose debt is being forgiven in the South, what’s that racial demographic? That’s what I’d want to know. How many Black borrowers are getting this debt relief and currently living in the South? Are we seeing the Black college grads living someplace else?

Black borrowers and other borrowers of color are more likely to be Pell Grant recipients, meaning they are eligible for $20,000 in relief, versus $10,000 for some other borrowers. Does it stand to reason then that if they get the full $20,000 and they live in states that will tax their relief, they’ll be disproportionately affected?

Absolutely. The tax bill is going to be higher, and three quarters of Pell Grant recipients are Black and Latino.

Do you imagine that immediate burden might be too much to bear for some people?

You have to be making less than $125,000 a year if you’re single [to qualify for the relief], and we need to talk about how much less than $125,000 these people are making. And if they’re living paycheck to paycheck, then a $1,000 [tax] bill that you weren’t anticipating is going to be difficult to pay — and people might need to weigh that. Obviously, in the long term, [erasing] up to $20,000 could be great, but how are you going to finance that thousand dollars? Are you going to take an advance on your credit card, which is going to be an enormous interest rate — much higher than on your student debt? Some may have the luxury of [support from] family members, but research shows that Black people don’t tend to have access to that intergenerational wealth.

Is it worth weighing if someone can absorb that additional tax next year before applying?

You noted in a testimony to Congress last year that Black borrowers already pay more taxes than their White counterparts. How might a one-time student-loan tax compound on other bills?

Every April 15, Black Americans are paying more than their White counterparts are. So this is just another example of a policy I would argue was designed to help Black borrowers — and on the federal level does help Black borrowers, because they’re not paying any extra taxes. It’s the states that often have regressive tax schemes that would be hitting Black borrowers the hardest.

What could states be doing to make student loan forgiveness more equitable?

Just follow the federal rules, which would allow this to be tax-free. A state legislature could enact a one-off and basically say, “Forgiveness is not going to be taxed.”

And what can the federal government be doing to further help people?

Student loan debt is a drag. It’s a drag on home purchases, it’s a drag on investing in their future. It’s a drag on the economy, really. If they didn’t have this debt around their neck, they could make better financial plans going forward.