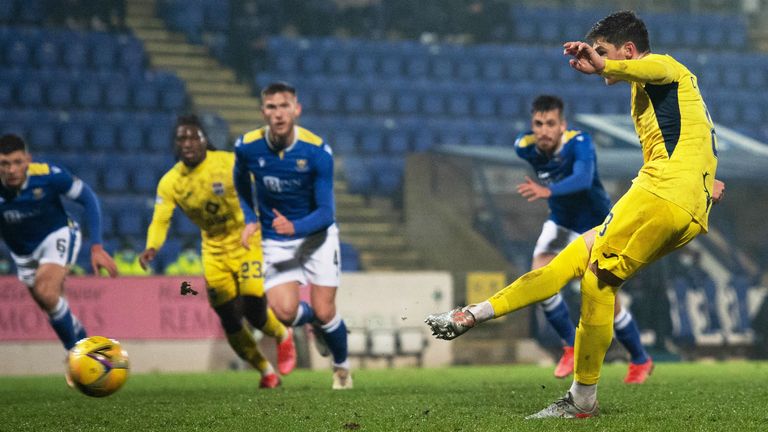 Callachan sealed a 2-1 away win in Perth and moved the visitors further away from the Scottish Premiership bottom club, who are now two points adrift with Dundee their nearest rivals.

Callachan hit the post with his first-half penalty before netting from close range in the 69th minute as County sealed a deserved win on the balance of play.

St Johnstone manager Callum Davidson had revealed on Tuesday that he had lost a further two players to self-isolation rules after already being without forward Chris Kane and Eetu Vertainen.

Goalkeeper Zander Clark and wing-back Shaun Rooney were missing from the Saints’ starting line-up, although they could welcome back the fit-again Murray Davidson.

Saints host Celtic on Boxing Day and no manager in the Premiership would welcome the accelerated winter break more than Davidson given Saints’ run and their need for reinforcements during the transfer window.

County started well and had several efforts at goal before taking the lead in the 15th minute. Joseph Hungbo played Charles-Cook into the left channel and the wide man dinked the ball over Elliot Parish.

The lead only lasted four minutes. Butterfield collected the ball 22 yards out and hit a powerful effort that deflected past Ashley Maynard-Brewer.

Saints defender James Brown came close with a powerful effort that flashed just over via a County player.

The penalty came in the 29th minute when Hungbo’s free-kick hit the arm of Craig Bryson in the wall. The former Derby midfielder made no complaint after Willie Collum pointed to the spot.

Callachan made a staggered run-up and Parish dived the wrong way but the former Hamilton player hit the ball off the outside of the post.

Hungbo had an effort saved as County continued to look the more enterprising team until the break.

Saints made a brighter start to the second half but did not get the rub of the green in the box.

The visitors stepped up a gear and regained the lead. Charles-Cook did the hard work, getting a cross in from the bye-line which White headed against the inside of the far post. The rebound fell invitingly for Callachan, who smashed the ball home from six yards.

St Johnstone did not really look like equalising, although Maynard-Brewer palmed away Stevie May’s 25-yard strike.

County could have added to their lead. Substitute Dominic Samuel and Hungbo both hit the frame of the goal from long range and missed better opportunities from closer in.

What the managers said

St Johnstone manager Callum Davidson: “After going a goal down, I thought we reacted really well to it. Second half, we tried to come out and be the team that was pushing.

“I keep talking about us not scoring goals but defensively we were really poor. We didn’t do enough first contact again and one-v-one battles, and allowed Ross County too many chances.

“I asked them to show character and have a go and I thought they did in parts but there were other parts that weren’t good enough.

“Last year, we were very good defensively and for me now we are not good enough in that department and it’s a concern for me.

“It’s something we need to sort, and I take responsibility for it. We have obviously had some issues but I expect better than that – I expect boys to fight and do better in certain situations.”

Ross County manager Malky Mackay: “I’m delighted to come here and play the way we did. On another day, we put the game to bed. We hit the post and the bar and were clean through on goal.

“We don’t take them and that allows them the last five minutes when we have got to defend well, which we do.”