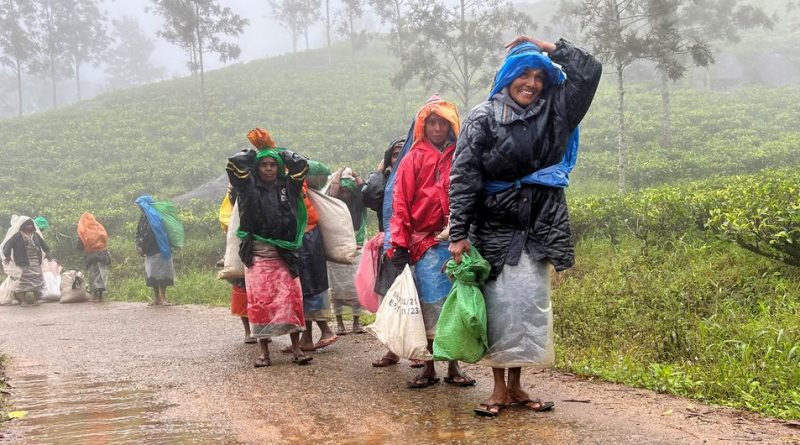 
Long before the country’s first-ever international debt default in May 2022 and Russia’s invasion of Ukraine, which added to the country’s problems, tea estate labourer Nagamma had already cut back on meals, as global trade froze during the coronavirus pandemic.

Her precarious situation in Sri Lanka’s central highlands hasn’t changed, but it’s not for want of trying.

“We work even when it rains and while the leeches suck our blood,” she says, peering out from her worker’s bungalow at the 100-acre plantation where she started work aged 14. “We can’t afford to buy chicken, fish or any other meat. We only eat vegetables and leaves. It is difficult for us to even send our children to school and even provide them proper meals. We are going through a very hard time.”

Wearing a worn plastic sheet wrapped around her tiny waist, barista-style, and an oversize quilt jacket that’s more of a sponge than a barrier to the rain, the 38-year-old mother-of-four heads out into the plantation to start her eight-hour shift.

At best, Nagamma can hope to earn $3 per day as a tea-plucker, assuming that she meets her daily quota of between 16 and 20 kilogrammes of leaves – the equivalent of two full sacks. But spiralling prices mean that she can buy less than half the amount of rice and flour that she used to, making it harder than ever to feed the 10 relatives who share her cramped cottage.

“The latest surveys indicated that this is escalating further, with households not consuming adequate diets across the nation.”

In addition to the chronic lack of nutritious food, fuel and medicines continue to be in worryingly short supply.

UN agencies and partners responded in June to the Government’s request for international assistance with an appeal that has helped the humanitarian community reach more than one million of Sri Lanka’s most vulnerable people with cash, food, school meals, medicine, protection and livelihood support, and aims to raise a total of $149.7 million to reach 3.4 million people in need.

As Sri Lankans turn on the TV news to watch President Ranil Wickremesinghe pledging publicly that “no-one would be allowed to starve” in next year’s looming food security crisis, relief teams have also expressed deep concern about the knock-on impacts of food, fuel and medicines shortages on the next generation of Sri Lankans.

“We have 215,000 women that’ll be giving birth between June and December 2022. This is a large portion of women that need support for medicines and care,” explains Kunle Adeniyi, UN Population Fund (UNFPA) Country Representative in Sri Lanka.

Pointing to “severe difficulties” in sustaining vital mother-and-baby outreach activities to remote communities because of the fuel crisis earlier this year, Mr. Adeniyi warns that many drugs have been out of stock “since the challenges began” in March 2022.

Just as worrying are the indications that families are “deprioritizing” health because they cannot also get to health facilities, either because of high fuel costs, or because they are working to earn enough money to eat.

“(Vulnerable Sri Lankans) need to be able to access the health facilities to ensure that we do not reverse the excellent gains we have made in maternal health in Sri Lanka,” Mr. Adeniyi insists. “Women’s lives do not stay on hold.”

That urgent need for action rings true in the capital Colombo, too, where months of fuel and electricity shortages prompted mass public demonstrations and deadly fuel riots, that led then-President Gotabaya Rajapaksa to flee the country on 13 July and resign from office. He returned to the island in early September.

Today, many Sri Lankans share their frustration at the scale of the country’s problems and their impact on daily life – not least owners of the country’s three-wheeler taxis. The Government has just doubled the weekly fuel quota for taxi drivers from five to 10 litres; for drivers like Kumar in Colombo, it’s a positive development that can’t come too soon.

“The economy collapsed a lot,” he explains, before pointing to the lack of Western tourists which many link to the Easter Sunday terror attacks in 2019. “It’s not like back in the day, people don’t hire us, prices have increased so they can’t afford to go with us anymore. We can’t decrease our prices either, petrol prices are so high, and we have our own children to look after, we have to buy them books and things.”

Back at the tea estate in Ramboda, an occasional group of Western tourists arrives to tour the factory and learn about how the drink is made.

The seven-stage production process – a noisy and aromatic combination of drying, mulching, rolling, grinding and grading – has changed little in the 100 years since the factory opened. Vast volumes of hot air needed to dry the leaves blast out from a hulking wood-fired furnace; it’s one of several decades-old forged metal machines that are kept running by know-how that’s handed down from father to son.

Snapshots and travelogs of the lush tropical forest grounds that surround the old factory abound on visitors’ social media accounts. But the daily reality is far from idyllic for Nagamma and hundreds of thousands of hill country tea plantation workers like her, many of whom trace their ancestry back to migrant labourers who came from India between 1837 and 1939, to work on Sri Lanka’s coffee, tea, and rubber plantations.

Watching Nagamma hard at work – barefoot on a steep hillside – any preconceptions that tea-plucking is a gentle activity quickly dissolve.

With a fast, powerful plunging movement of her arms, she wrenches free handfuls of fresh shoots from the waist-high tea bushes, before shoving them into the large sack on her back. Weeds and broken branches must be identified and discarded, and workers have to be careful as they negotiate the estate’s narrow paths in their flipflops, particularly when they turn to mud in the rains, which have come early this year.

One of the problems with working when it’s wet, Nagamma explains, is that the sharp leaves often draw blood on fingers softened by the rain and repeated tea-plucking.

There’s no shortage of challenges for Nagamma’s employer too, the privately-owned Blue Field tea estate, which has been forced it to reduce its workforce drastically, down to 150.

In better days, it employed 250 workers, but that was before a nationwide ban on chemical fertilisers, pesticides and other agricultural essentials came into force in March 2021, causing a massive drop in production – and profits.

Despite the government’s U-turn on the ban, the damage was done, and Sri Lanka’s farming sector has struggled to recover fully. That’s in large part because galloping inflation pushed the price of fertilizer and seeds out of the reach of many, which in turn led to smaller harvests, but also because of a chronic lack of investment in modern machinery.

At the height of the crisis, vegetable growers like Thusita had to find 45,000 rupees for a 50-kilogramme sack of fertilizer, he remembers. Today, the price has fallen back to 25,0000 rupees, but that is still around 17 times higher than in better times, the bare-footed farmer says, as he incorporates handfuls of the precious pink pellets into the heavy soil at his plot, with the help of a simple hoe.

September was a particularly difficult month for the 100-year-old tea factory, explains customer relations officer Abdull Bary Mursheed, who ascribes disastrous production levels – from 2.5 tonnes to just one tonne per day – to chronic fuel shortages, a lack of fertilizer and long power cuts.

“It’s a huge difference,” Mr. Abdull Bary says, worried for the factory’s future, given that the younger generation know they can earn twice as much outside the Nuwara Eliya region, including on construction sites.

“Most of the employees…are looking for outside jobs. And the future, I don’t know; the thing is, we cannot find employees here.”