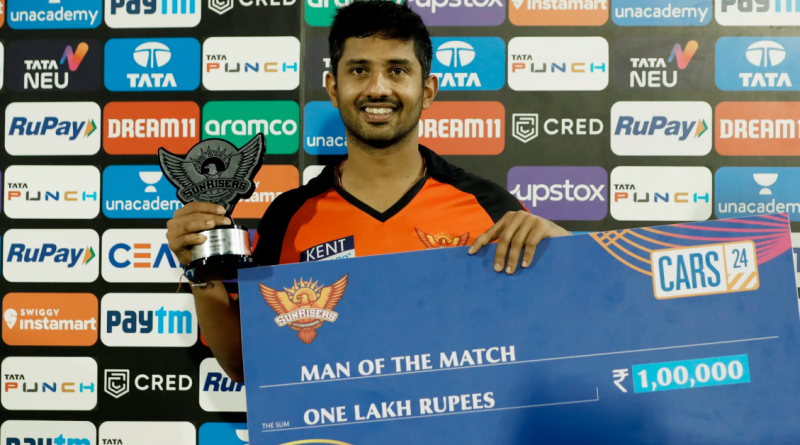 
Rahul Tripathi played an innings of a lifetime against Kolkata Knight Riders and got his side home in what turned out to be a 7 wicket victory for Sunrisers Hyderabad. After the victory in the post-match presentation, Tripathi said that SRH management has helped tremendously.

Tripathi made 71 off 37 balls which took the game away from Kolkata Knight Riders.

Rahul Tripathi came into bat in a tricky situation. SRH were chasing 176 runs and they didn’t have a great start as they lost Abhishek Sharma early. Tripathi didn’t look too settled too as he focused on taking quick singles.

Once Andre Russell came into the bowl Kane Williamson looked to take him on, but on the 2nd ball of the 6th over in trying to play a pull shot he dragged the ball onto his stumps and got out.

Rahul Tripathi then just took over from there. As soon as Varun Chakraborty came into the bowl, he attacked him from the first ball. His attacking innings meant that Aiden Markram could bid his time and set himself in the middle. And that’s exactly what happened as Rahul and Markram fifties took SRH over the line.

Rahul Tripathi has been dealing with injuries recently, on how SRH has supported him he said, ” I have struggled with my health in the past week but the management have supported me. I enjoy it a lot. There are tough days but on good days, I look to enjoy.”

On the way he batted against Varun and Russell he said, “Russell bangs in short and I was looking for the pull if he bowled short. Varun bowls well. I didn’t expect him to bowl up. I went with the shot and wasn’t pre-determined. So I thought of putting him under pressure.”

Overall he felt nice to play that innings as it got his team over the line.