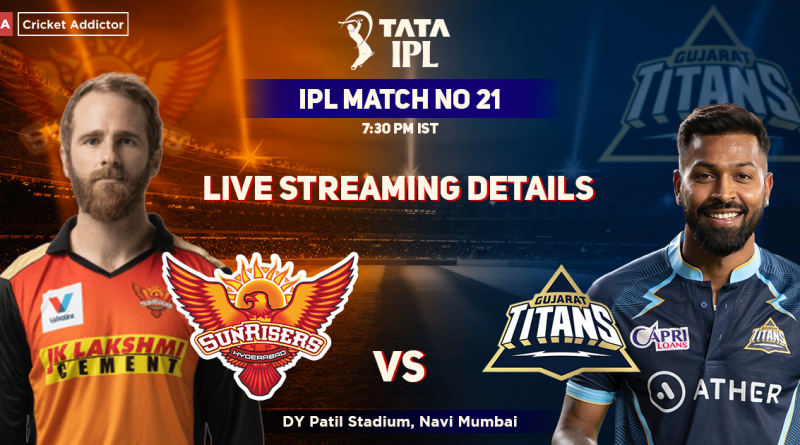 Also Read: PBKS vs GT: As An Opener I Have To Bat Through The Innings – Shubman Gill After PoTM Performance vs PBKS

Talking about Gujarat Titans, the Hardik Pandya-led side outplayed Punjab Kings in their last match. Punjab Kings batted first in the match. Liam Livingstone slammed 64 runs while Shikhar Dhawan added 35. PBKS reached a big total of 189-9 till the end.

Also Read: PBKS vs GT: Watch – Rahul Tewatia’s 2 Sixes Off The Last 2 Balls That Sealed The Win For Gujarat Titans

For Gujarat Titans, Shubman Gill shattered an impeccable knock of 96 runs. Sai Sudharsan scored 35 while Hardik Pandya hit 27 runs. On the final 2 balls, GT needed 12 runs for victory. Surprisingly, Rahul Tewatia slammed both the deliveries for six and grab the victory for his team by 6 wickets.

SRH vs GT Live Streaming Details- When And Where To Watch Sunrisers Hyderabad vs Gujarat Titans Live In Your Country? IPL 2022 Match 21

Fans can watch the online live streaming of the match on the Disney+ Hotstar app. However, viewers need a premium subscription to watch the matches live on the app.

In African regions including countries like South Africa and Zimbabwe, the match will be telecast on SuperSports Cricket.

In the United Kingdom (UK)

Sky Sports will present the live telecast of the match in the United Kingdom.

In the Caribbean islands, Flow Sports will telecast the match. The live streaming will be available on the Flow Sports app.

In the United States

The match will be available to watch on Willow TV in countries like United States and Canada.

In Australia, Fox Sports (Fox Cricket) will present the live-action of match.