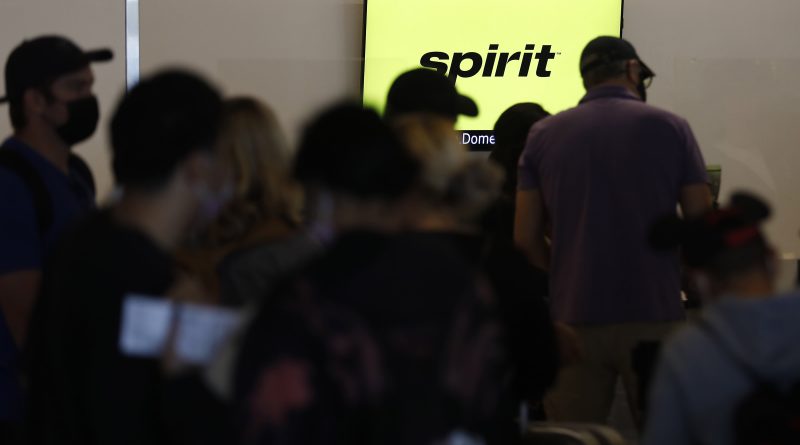 Passengers form a line inside LAX Terminal 5 Tuesday morning as Spirit Airlines has canceled 313 flights on Monday, 40% of its scheduled flights, and 210 flights have been delayed.

Spirit Airlines has canceled more than 370 flights, nearly half its Thursday schedule, as the airline tries to finally end disruptions that have vexed customers since the weekend.

The airline blamed a combination of bad weather, staffing shortages and technology problems for the disruptions, which has led to more than 1,700 cancellations since last weekend.

Angry and confused passengers complained about long waits to speak with customer service and long waits at crowded airports.

The issue is testing the low-cost carrier’s strides in recent years to improve reliability and its customer service.

Spirit said the problem was made worse by the spike in summer travel demand, which bounced back faster from a pandemic slump than the U.S. aviation industry expected.

On Thursday morning, more than 370 Spirit flights were canceled, accounting for 80% of the flight cancellations in the U.S., according to flight-tracking site FlightAware.

Airlines will often cancel large numbers of flights in order to get planes and crews in place and prevent further disruptions that could strand employees and customers at airports.

“After working through yesterday’s proactive cancellations, we’ve implemented a more thorough reboot of the network, allowing us to reassign our crews more efficiently and restore the network faster,” Spirit said in a statement Wednesday. It said that flight cancellations would “progressively” drop in the coming days.