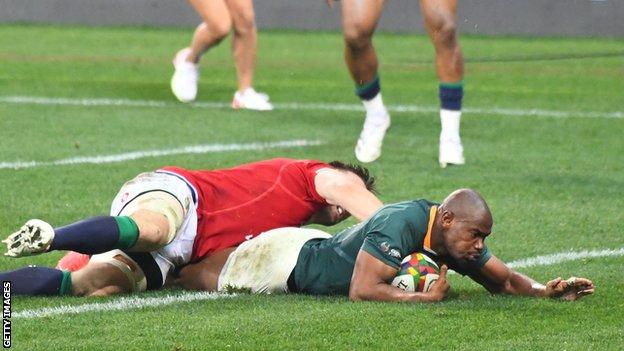 
The British and Irish Lions’ series with South Africa will go to a decider after the Springboks won a fiery second Test 27-9 at Cape Town Stadium.

The Lions led after a cagey first half as Dan Biggar’s three penalties trumped Handre Pollard’s two, while a player from each side went to the sin-bin.

But a stylish Makazole Mapimpi try gave the world champions a narrow two-point lead at the start of the second half.

Pollard scored three more penalties to further put the Lions in their place after the tourists won the first Test 22-17.

Both sides will have to raise their level once again in what promises to be a thrilling series decider on Saturday, 7 August.

Referee O’Keeffe forced into the limelight

South Africa director of rugby Rassie Erasmus had made himself the centre of attention during the week by posting an unprecedented hour-long monologue critiquing referee Nic Berry’s work in the Lions’ opening win.

Erasmus’ act also threw the spotlight on Ben O’Keeffe, who took charge of the second Test.

The New Zealander was put through his paces by two emotionally charged sides, with 40 minutes of first-half playing time taking 62 minutes to complete because of stoppages needed for officiating decisions.

Tensions boiled over after just two minutes as Alun Wyn Jones and Eben Etzebeth stared each other down and players from both sides faced off around them.

Pollard and Biggar exchanged penalties, before an uncharacteristic miss by the South Africa 10 as the Lions took a 6-3 lead.

Then the story became as much about the players leaving the field as those still on it. First 2019 world player of the year Pieter-Steph du Toit exited with a shoulder injury, replaced by the much less experienced Kwagga Smith.

The Lions were dealt a bigger blow when Van der Merwe was given a yellow card for his trip on Cheslin Kolbe.

But Kolbe followed two minutes later after he took Conor Murray out in the air – an action that prompted players from both sides to pile into another scrap and a telling off for both captains from O’Keeffe, who promised more yellow cards if the behaviour continued.

Pollard levelled things with an impressive 54m kick, before the Lions had a try ruled out as Siya Kolisi held the ball up as Robbie Henshaw tried to get it to ground after taking a chip ahead.

The tourists were brought back for an earlier penalty and Biggar slotted his third to give the Lions a three-point advantage at the break.