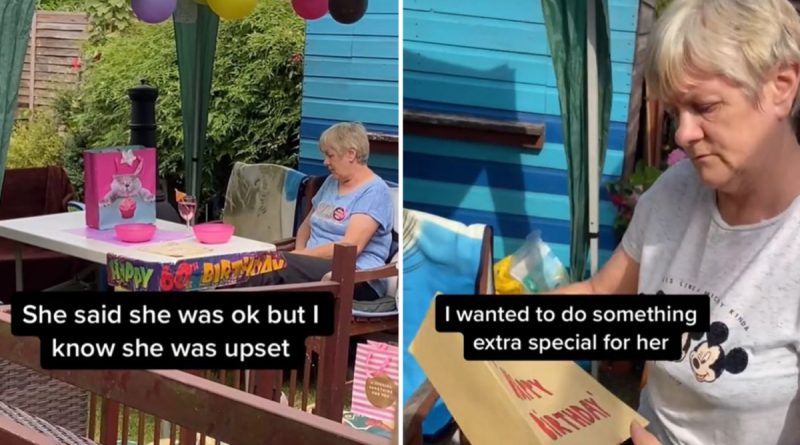 
A SON was left devastated after none of his elderly mum’s friends turned up for her birthday party.

TikTok user @coxy.official uploaded a heartbreaking photo of his mum sitting by herself in her birthday gazebo in the garden opening her presents alone.

Coxy said his mum said she “was ok” but he knew she was “upset” at the birthday snub, and he added that she “deserved better.”

The sweet elderly lady could be seen sitting under her birthday banner and balloons, helping herself to some crisps to pass the time.

The gut-wrenching video has been viewed over seven million times, and people poured out their well-wishes to Coxy’s mum.

One said: “Omg I am crying. Please tell her I would have come to the party.”

Another added: “I feel so bad for her, I would have come to the party.”

Thankfully, the story has a happy ending as Coxy posted a follow-up video of the VERY special gift he had bought her.

He told his mum to read out a message he had written on a number of sheets of paper detailing the gift – and she broke down in tears when she discovered what it was.

The notes said: “For your birthday I wanted to do something different so I have paid off your mortgage.”

Coxy added: “As nobody showed up I wanted to do something extra special for her.

“So she now has more money for the things she wants.”

Many people were moved by his very generous gesture, with one saying: “You are the biggest gift for her.”

Previously, a mum was devastated after 22 kids are no shows to her son’s sixth birthday party leaving him to play alone in the park.

A little boy was heartbroken as NOBODY turns up to his sixth birthday party at pizza restaurant.

And a mum broke down in tears when just ONE friend came to birthday party for her son with Down’s Syndrome.