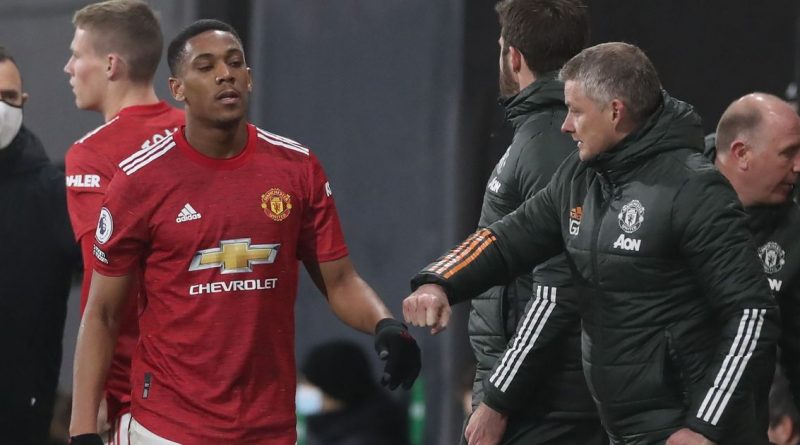 
Manchester United striker Antony Martial has returned to training but is not yet ready to link back up with the full squad, according to manager Ole Gunnar Solskjaer.

The French striker has been sidelined by a knee injury suffered while playing against Kazakhstan in a World Cup qualifier for France in March.

United fans have not seen their no.9 in action ever since, with the 25-year-old last appearance coming in their 3-1 away defeat to Leicester City in the FA Cup quarter-final in March.

It ruled Martial out of the final two months of the season, including United’s Europa League final defeat to Villarreal.

He also missed out on a place in Didier Deschamps’ 26-man France squad for Euro 2020, which saw Les Bleus get knocked out in the Round of 16 stages on penalties by a resilient Switzerland side.

Solskjaer revealed Martial is nearing a return for United, although he was reluctant to reveal too much.

“Yes, there will be more players coming,” Solskjaer said to Manutd.com.

“Anthony Martial has also joined us, but he’s not joined the team training yet. He’s recovering from the knee injury and that looks good.

“The rest of them will drop in after their well-earned holidays because some of them needed them and they deserved them.”

The skillful attacker is one of United’s longest serving players having arrived at Old Trafford from Monaco in 2015 for £54 million.

Since then, he has gone on to make 258 appearances for The Reds scoring 78 goals and contributing 50 assists, helping United win the FA Cup, the Europa League, and the League Cup.

How will Man United fare this season? Comment Below

However, his future in the red half of Manchester was thrown into doubt, with reports suggesting Man Utd were ready to sell him following Jadon Sancho’s arrival from Borussia Dortmund.

The 21-year-old finally made his £73 million move to United, and while fans are understandably excited, it does beggar the question where the Frenchman can fit in amongst the United frontline?

Martial has mainly featured as a centre-forward under Solskjaer, but he faces stiff competition in experienced striker Edison Cavani, whose 17 goals and six assists trumped Martial’s record of seven goals and 10 assists last season.

Martial is contracted at Old Trafford until 2024, however, United could be willing to listen to offers in order to shift his significant £250,000 per week salary from their wage bill.

Tottenham have allegedly expressed an interest in Martial’s services but would likely need to pay around £50 million to sign the striker.

Martial has endured a mixed time at Old Trafford.

On his day, his talent and ability are unquestionable, but consistency has always proven to be his Achilles heel.