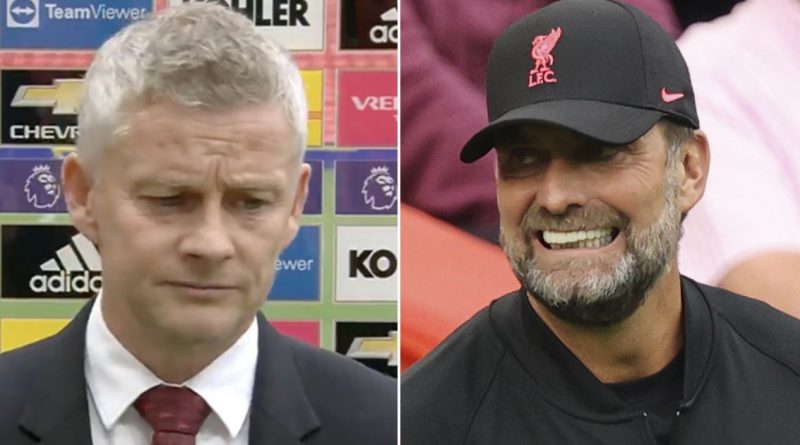 
Manchester United were beaten at Old Trafford for the second time in four days, after Aston Villa won 1-0 thanks to a late Kortney Hayse header and an injury time missed penalty by Bruno Fernandes

Bruno Fernandes has scored more penalties for Manchester United than any other player. With Cristiano Ronaldo around, it might be a while before he adds to his tally.

Perhaps it was the lingering presence of Ronaldo that spooked him. Maybe it was the pressure of stepping up to the mark in front of a seething Stretford End.

But Fernandes’ blasted effort was closer to Row Z than Emiliano Martinez’s goal.

So Villa travelled back down the M6 with their first win over United for almost 12 years thanks to Hause’s searing header just a few minutes earlier.

London-born Hause was only playing because Axel Tuanzebe was ineligible to play against the club that has loaned him to Villa.

But while 3,000 travelling fans serenaded Dean Smith’s men at the final whistle, the pressure on Solskjaer will get cranked up another notch.

His joke about being under the cosh isn’t so amusing now United have lost three of their last four games.

The United boss had pointed an accusing finger at Jurgen Klopp on Friday after claiming his team were being denied penalties by the Liverpool manager’ claim that his rivals were getting some dodgy decisions.

This time he moaned that Watkins was offside and fouling De Gea when Hause scored.

And he followed that up by complaining that Villa’s attempts to psyche out Fernandes after the penalty award were also out of order.

He said: “You see the inconsistencies again with VAR, because Watkins is clearly standing on or is touching David as the header goes in.

“So he is offside or it is a foul. The linesman did well, he reported it or called it in to VAR but they turned the decision down. So bad decisions again.

“What I also didn’t enjoy was the way they crowded the referee and the penalty spot and tried to affect Bruno.

“It clearly worked for them but that’s not great to see.

“But they achieved what they needed to and got what they wanted to.”

Solskjaer now goes into Wednesday night’s Champions League clash at Villarreal with a defensive crisis on his hands.

Luke Shaw and Harry Maguire both limped off with injuries, while Aaron Wan-Bissaka is suspended for the trip to Spain.

He will also be worried about his team’s lack of creativity.

Ronaldo had scored four goals in his three appearances since returning to Manchester.

But he never had a sniff. After firing one early chance wide from distance, he was forced to live on scraps.

Maguire’s header was kept out by a flying save from Martinez just before the break and Paul Pogba lifted a shot over the angle in the second half.

Villa, in contrast, should have taken the lead when John McGinn’s pass inside Shaw enabled Matty Cash to drive a cross to the far-post only for Matt Targett to blaze over from inside the six-yard box.

David De Gea then redeemed himself by stretching out a leg to block Ollie Watkins’ shot after lashing a poor clearance straight at the Villa forward.

Solskjaer was unhappy with the officials, feeling a number of decisions went against his side

Ezri Konsa headed over before half-time and Watkins was thwarted by De Gea again in the second half after a thrilling charge from the halfway line from Douglas Luiz’s pass.

But with the game drifting towards a stalemate, Villa scored.

Hause’s movement left substitute Cavani standing and he met Luiz’s corner with a meaty header that flew past De Gea.

Fernandes had scored 21 of his 22 penalties for United. His 13-goal haul from the spot last season is a club record.

He can be certain that Ronaldo will expect to take the next one.

Villa boss Smith said: “We have had an awful lot of suffering as Villa fans here and against Man United in general.

“We’ve been close in the last couple of years here. But we were aggressive and brave against their front four and I thought we deserved it.

“People will say it’s a big win but it was also a big performance.”