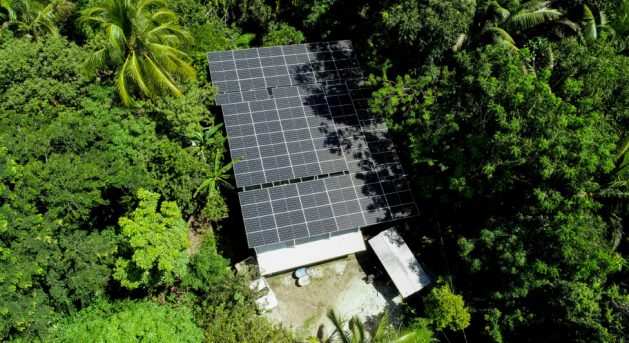 SUCHITOTO, El Salvador, Nov 03 (IPS) – The need for potable water led several rural settlements in El Salvador, at the end of the 12-year civil war in 1992, to rebuild what was destroyed and to innovate with technologies that at the time seemed unattainable, but which now benefit hundreds of families.

Several communities located in areas that were once the scene of armed conflict are now supplied with water through community systems powered by clean energy, such as solar power.

“The advantage is that the systems are powered by clean, renewable energies that do not pollute the environment,” Karilyn Vides, director of operations in El Salvador for the U.S.-based organization Companion Community Development Alternatives (CoCoDA), told IPS.

Hope where there was once war

The organization, based in Indianapolis, Indiana, has supported the development of 10 community water systems in El Salvador since 1992, five of them powered by solar energy.

These initiatives have benefited some 10,000 people whose water systems were destroyed during the conflict. Local residents had to start from scratch after returning years later.

This small Central American country experienced a bloody civil war between 1980 and 1992, which left some 75,000 people dead and more than 8,000 missing.

“Before leaving their communities, some families had water systems, but when they returned they had been completely destroyed, and they had to be rebuilt,” Vides said, during a tour by IPS to the Junta Administradora de Agua Potable or water board in the canton of El Zapote, Suchitoto municipality, in the central Salvadoran department of Cuscatlán.

In El Salvador, the term Junta Administradora de Agua Potable refers to community associations that, on their own initiative, manage to drill a well, build a tank and the entire distribution structure to provide service where the government has not had the capacity to do so.

There are an estimated 2,500 such water boards in the country, which provide service to 25 percent of the population, or some 1.6 million people, according to local environmental organizations.

But most of the water boards operate with hydroelectric power provided by the national grid, while the villages around Suchitoto have managed, with the support of CoCoDA and local organizations, to run on solar energy.

This area is located on the slopes of the Guazapa mountain north of San Salvador, which during the civil war was a key stronghold of the then guerrilla Farabundo Martí National Liberation Front (FMLN), now a political party that governed the country between 2009 and 2019.

Some of the people behind the creation of the water board in the canton of El Zapote were part of the guerrilla units entrenched on Guazapa mountain.

“This area was heavily bombed and shelled, day and night,” Luis Antonio Landaverde, 56, a former guerrilla fighter who had to leave the front lines when a bomb explosion fractured his leg in July 1985, told IPS.

“A bomb dropped by an A37 plane fell nearby and broke my right leg, and I could no longer fight,” said Landaverde, who sits on the El Zapote water board.

Peasant farmers in the technological vanguard

At the end of the war in 1992, communities in the foothills of Guazapa began to organize themselves to set up their community water systems, at first using the national power grid, generated by hydroelectric sources.

Then they realized that the cost of the electricity and bringing the grid to remote villages was too high, and necessity and creativity drove them to look for other options.

“I was already very involved in alternative energy, and we thought that bringing in electricity would be as expensive as installing a solar energy system,” René Luarca, one of the architects of the use of sunlight in the community systems, told IPS.

The first solar-powered water system was built in 2010 in the Zacamil II community, in the Suchitoto area, benefiting some 40 families.

And because it worked so well, four similar projects followed in 2017.

Two were carried out around that municipality, and another in the rural area of the department of Cabañas, in the north of the country.

Given the project’s success, an effort was even made to develop a similar system in the community of Zacataloza, in the municipality of Ciudad Antigua, in the department of Nueva Segovia in northwestern Nicaragua.

However, these were smallscale initiatives, benefiting an average of 100 families per project.

“There were eight panels, they were tiny, like little toys,” said Luarca, 80, known in the area as “Jerry,” his pseudonym during the war when he was a guerrilla in the National Resistance, one of the five organizations that made up the FMLN.

Then came the big challenge: to set up the project in the canton of El Zapote, which would require more panels and would provide water to a much larger number of families.

“This has been the biggest challenge, because there are no longer four panels – there are 96,” said Luarca.

The water system in El Zapote is a hybrid setup. This allows it to use solar energy as the main source, but it is backed up by the national grid, fueled by hydropower, when there is no sunshine or there are other types of failures.

“Since it is a fairly large system, it is not 100 percent solar, but is hybrid, so that it has both options,” explained Eliseo Zamora, 42, who is in charge of monitoring the operation of the equipment.

Using the pump, driven by a 30-horsepower motor, water is piped from the well to a tank perched on top of a hill, about five kilometers away as the crow flies.

From there, water flows by gravity down to the villages through a 25-kilometer network of pipes that zigzag under the subsoil, until reaching the families’ taps.

The project started when the armed conflict ended, but it took several years to buy the land, with resources from the six communities involved, and to acquire the machinery for the hydraulic system. It began operating in 2004 with electricity from the national grid, before CoCoDA switched to supporting the solar infrastructure.

For the installation of the panels and the adaptation of the system, the water board contributed 14,000 dollars, part of it from the hours worked by the villagers.

The new solar power system was inaugurated in June 2022 and benefits some 10 communities in the area – more than 2,500 families.

The service fee is six dollars per month for 12 cubic meters of water. For each additional cubic meter, the users are charged 0.55 cents.

“Our water is excellent, it is good for all kinds of human consumption,” the president of the water board, Ángela Pineda, told IPS.