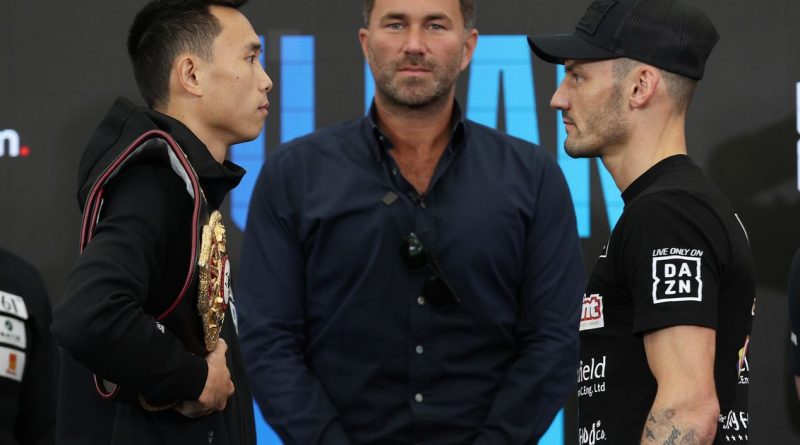 Xu Can and Leigh Wood face off in a world featherweight title clash that now headlines the first week of Matchroom Boxing’s Fight Camp.

The contest was bumped up to the main event after British welterweight Conor Benn was forced to withdraw from his clash with Mexican Adrian Granados as a result of a positive Covid-19 test upon his entry to the bubble.

The bout takes place with a small crowd of approximately 500 fans at Matchroom HQ in Brentwood, Essex and will be the challenger Wood’s first shot at a world title in his career, which has come around since his link up with new trainer Ben Davison.

The Chinese champion has not fought since 2019 where he defeated Manny Robles in a unanimous decision victory, but he has since consistently been linked with a unification clash with Josh Warrington before his defeat to Mauricio Lara.

His opponent on the night, is notorious for his hard-hitting style and dispatched of undefeated Reece Mould back in February recovering from his previous defeat to domestic rival Jazza Dickens.

The undercard features some top contests including Campbell Hatton in his third professional fight under the Matchroom banner, in addition to a fiery co-main event between Tommy McCarthy and Chris Billam-Smith at cruiserweight.

Here’s all you need to know ahead of the contest…

What time are the fights on?

Ring walks for the main event are expected to be between 10:30 and 11pm, with the undercard kicking off at 7pm.

All fight times are subject to change depending on how quickly earlier fights are completed.

How to watch via TV and live stream

DAZN can be watched on multiple devices including laptop, smart TV and mobile.

“At the moment I only want to focus on this fight,” he said.

“But we had lots of rounds of negotiations with Warrington who was an ideal opponent.

“So I personally want to challenge Warrington after this fight.

“But this can only happen depending on the outcomes of my fight with Wood and his fight with Lara.

“I think that my defence is strong enough to combat Leigh Wood in this fight.

I am good throwing continuous and non-stop punches during the fight.

“So I don’t think it will be an issue when approaching this fight and in my preparations.”

“If you are good enough you will do it, there is no excuses,” Wood told Mirror Fighting on media day.

“I am likely to have 300 people getting behind me, he hasn’t boxed anyone in nearly two years.

“He has his things he is up against, the best plan will prevail on the night.

“Everything for a reason, I’m sure he will be fuming with that,” Wood continued.

“The same in the case of Kid Galahad, he is from the same gym and I could never wrap my head round why I wasn’t getting the opportunities.

“I have really caught up in the last three years to the leading contenders, and put myself in world title contention.

“And to now fight for a world title, and possibly win one would be the icing on the cake.”