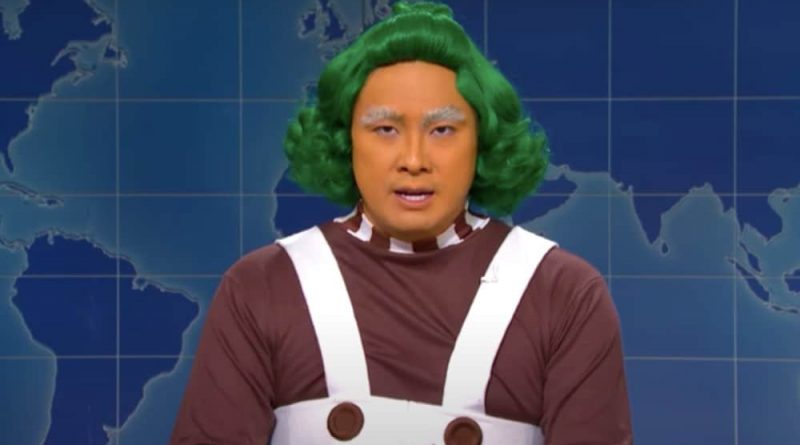 “Many on social media [are] calling him a ‘Twink Willy Wonka,’” Jost said, before turning to Bowen Yang, “a proud gay Oompa Loompa,” for comment on the matter. There was just one problem.

“Oh my god,” Yang gasps, “You just outed me on national television.”

“I just came here to make a statement on our impending factory strike, but now I guess I’ve got to call my parents…” he continued. “They live in Loompa-land. It’s not as progressive as here. They like, just got Will & Grace. So yeah, it’s gonna be a conversation.”

The poor Oompa Loompa bravely tries to continue his speech about the chocolate factory strike – likely a nod to the real-life IATSE strike that was averted that evening – but somehow his thoughts keep straying back to the “scrumdiddlyumptious” young Wonka.

“This twink Wonka, or Twonka, may look as yummy as lickable wallpaper, but make no mistake, he is…” he begins to read, before breaking off again.

“You know what? Actually, Colin, you just did me a huge favour, because now I can be honest – about everything!”

He then spills the tea on life behind the scenes at the chocolate factory – and while young Twonka may look pretty, his working practices aren’t.

“Point blank, the man doesn’t know how to make chocolate! OK? He doesn’t, he’s an ideas man who’s never touched a machine, he just tumbles into the inventing room and says something like, ‘Oh what about a gumdrop that makes children dream silly dreams?’ and it’s like, ‘Yeah b***h, what about it?’

“Meanwhile we’re up all night rehearsing the little song and dance we do when a child dies! The whole thing is sick!”

Earlier in the episode the Saturday Night Live cast addressed DC Comics’ recent announcement that the new Superman – his son, Jon Kent – will be bisexual.

“They also announced that The Riddler has always been down for whatever,” Jost joked.