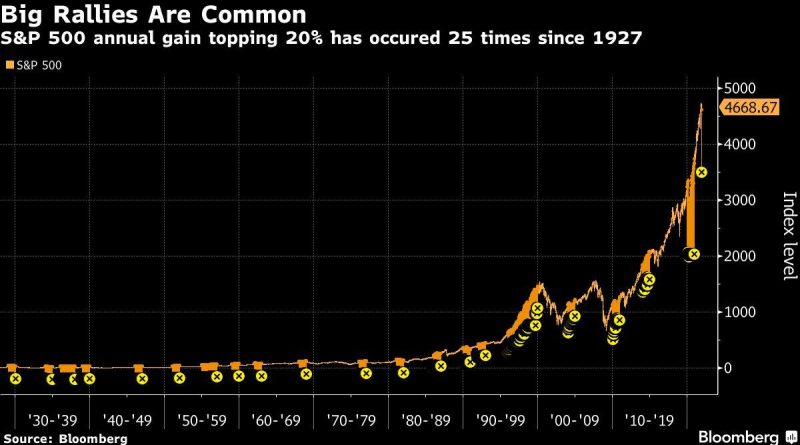 
(Bloomberg) — The S&P 500 Index is poised to end higher for the third year in a row, having added more than 20% so far in 2021. Another rally in 2022 would make for a four-year winning streak, which has happened only five times in nearly a century.

Analysis shows a three-year streak — like the one now — is uncommon, but not terribly out of the ordinary, occurring 11 times for data going back to 1927, and making another year of gains a toss-up. The longest-ever wining streak was the eight-year period from 1982 to 1989 (even with a dramatic crash in October 1987, the S&P 500 still eked out a gain).

A substantial one-year jump is fairly common, with the index adding 20% or more during a calendar year 25 times, or about once every four years.

Most strategists expect the index will finish 2022 higher, with the average forecast level at 4,950 (versus a close of 4,669 on Thursday), with the lowest forecast at 4,400 and the highest at 5,330. The latter is from Oppenheimer Asset Management’s chief investment strategist John Stoltzfus, Wall Street’s biggest equity bull at the moment.