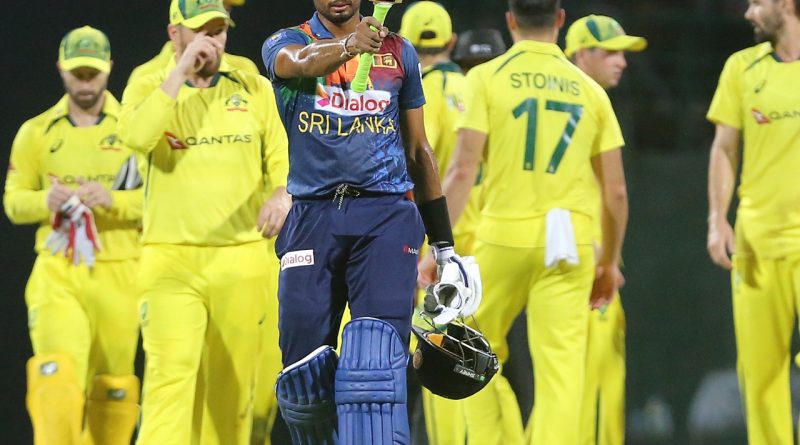 
Sri Lanka limited-overs captain Dasun Shanaka said he was contented with his performance in the final T20I match against Australia in Pallekele. Australia had already sealed the series with successive wins in the first two matches in Colombo.

Sri Lanka was all fighting for their pride and their captain ensured they registered a thumping victory in the final T20I match. While chasing 177 in the second innings, the hosts were reeling at 118/6 after 17 overs and Shanaka was too struggling to score runs, just six runs after facing 12 deliveries at that point.

Sri Lanka needed 59 runs from 18 balls. It was just a matter of time for the Sri Lankan skipper to turn the table on his head. Shanaka tonked Jhye Richardson for a six-over wide long-on to welcome the pacer in the penultimate over. Chamika Karunaratne, who was silently watching his captain take the Australian pacers to the cleaners, hit one boundary in his meagre contribution to the undefeated 69-run stand between them.

There was a chance it would all go wrong: Dasun Shanaka

Shanaka had done a tremendous job in terms of creating pressure on the Australian bowlers as Kane Richardson, while defending 18 runs in the final over, started with a couple of wide balls. The equation came down to 15 off four deliveries, the Sri Lankan skipper clobbered a couple of fours before smoking Richardson’s full toss straight down the stands to level the scores.

Shanaka wasn’t required to hit the winning runs as Richardson helped him with another wide delivery. Sri Lanka became the team to score the most number of runs successfully chased in the last three overs and Shanaka (54* off 25 balls became the first player to score more than 50 runs in the slog overs of a T20I chase.

“It was a huge joy to me to be able to play an innings like that. There are very few innings like that. My plan was to hit three boundaries an over in the last three overs. That would mean 54 runs [if all the boundaries were sixes]. With the singles we would get, there’d be a chance. There was a chance it would all go wrong, but I was able to do my best. It was great to win – not just for me, but the whole country,” Shanka was quoted as saying by ESPNcricinfo.

We know that people in Sri Lanka are under a lot of pressure: Dasun Shanaka

Shanka acknowledged the grievance of fellow citizens struggling to cope with the economic crisis in the island nation and expressed his gratitude toward the crowd for supporting them in the challenging times.

Sri Lanka will take on the Australians in the five-match ODI series as a preparation for the 2023 50-over World Cup in India and the captain is banking on his batting unit to make the difference against the five-time World Cup holders.

“We know that people in Sri Lanka are under a lot of pressure. They are not getting the necessities. Despite that, they are supporting us a lot. We are really thankful to them for that. We are getting ready to deliver in the ODIs. The strength of the batting will decide the series I think, because I’m sure our batters will play well throughout the series,” Shanaka said.

The first ODI between Sri Lanka and Australia will be played at the Pallekele International Cricket Stadium on Tuesday (June 14).

Also Read: SL vs AUS: Major Blow To Australia As Kane Richardson Gets Ruled Out Of Sri Lanka ODIs