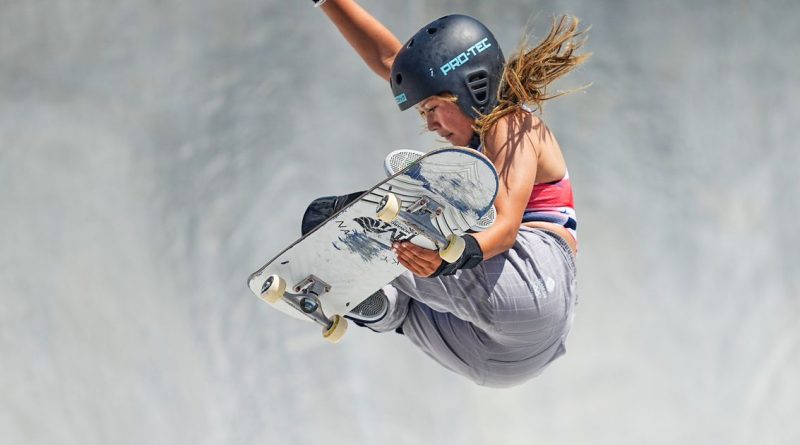 
“I feel like people think ‘I’m too young, I can’t do it’, but if you believe in yourself, you can do anything. I believed in myself and I’m here”

Sky’s the limit: Brown showed her class to make the podium (

When she fell to earth a year ago and hit her head so hard she lost consciousness Sky Brown could have quit.

When she twice crashed in the Olympic final yesterday attempting the same trick, she could again have chosen another way out.

Nobody would have thought badly of her. She is 13 years old after all.

But Britain’s youngest summer Olympian did not get to where she has by taking the easy option.

Against her parents wishes she came out of hospital last summer and climbed straight back onto her board.

And at sun-baked Ariake Urban Park on the biggest day of her sporting life her response was to again confront adversity straight on.

Becoming Britain’s youngest ever Olympic medallist took more courage and skill than the average child of her age possesses.

But there is nothing average about Sky Brown, who has already hatched plans to compete in surfing as well as skateboarding at the next Olympics in France.

As she prepared to drop in for her final shot at glory, dad Stu assured her: “It’s just a contest, if you fall it doesn’t define you”.

Next in her ear was Sakura Yosozumi, the soon-to-be crowned champion. “You’ve got it, Sky,” she said. “I know you’re going to make it.”

Brown pushed off, accelerating down into the bowl and 45 seconds later, having nailed the elusive ‘kickflip indy’, the Bronze medal was hers.

If that sounds like the language of Generation Z then that is because skateboarding is child’s play.

Sky: “I really hope I inspire some girls”
(

“I really hope I inspire some girls,” said Brown, whose final score of 56.47 put her just behind 19-year-old Yosozumi, and 12-year-old runner-up Kokona Hiraki.

“I feel like people think ‘I’m too young, I can’t do it’, but if you believe in yourself, you can do anything. I believed in myself and I’m here.”

Belief has never been a problem for Brown, born to an English dad and Japanese mum, who divides her year between Japan and America’s west coast.

The combined age of the three medallists was 34
(

Yet it was in Bath as a nine-year-old that her path to Tokyo began when she competed against Lucy Adams.

Adams went on to become GB Skateboard’s Progression Project Lead and armed with what she saw that day moves were made to secure the youngster for Team GB.

How wise that move looks today and it could get better if Brown doubles up at the 2024 Paris Games, doubtless attracted by the surfing competition being held in Tahiti!

Sky plans to compete in surfing AND skateboarding at next Olympics
(

“I’m definitely going to try,” she said. But for now she will have to listen to her parents.

“She’s straight back to school,” said dad. “And we’ll take her off social media for a little while.”