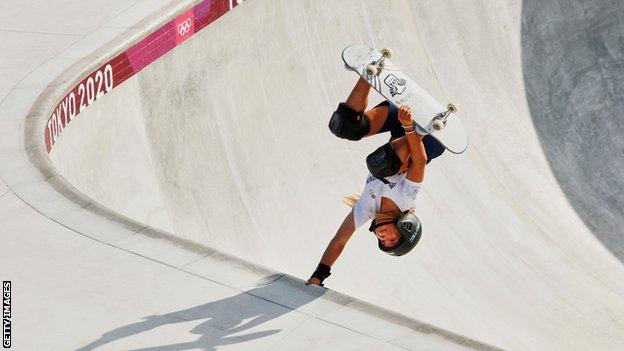 For skateboarder Sky Brown, life will never be the same again after she became Britain’s youngest-ever Olympic medallist.

The limelight is nothing new for the 13-year-old, who has grown up with media attention and is a future superstar for the digital age in a sport which could become a mainstay of the Olympic scene.

On Wednesday, she won bronze in the women’s park skateboarding at Tokyo 2020.

Here are 13 things to know about the British skateboarding star.

She is Team GB’s youngest-ever athlete – and youngest medallist

Brown made history when she stepped out at the Ariake Urban Sports Park, breaking Margery Hinton’s 93-year-old record to become the youngest athlete to represent Team GB.

Brown finished second in qualifying and took bronze after scoring 56.47 in her final run, having fallen in her first two attempts.

Her mother is Japanese and her father is English

Brown’s dad Stu is English, but moved to the United States in his teens. He and Sky’s mum Mieko met in Japan, where both Mieko and Sky were born and the family – which also includes Sky’s brother Ocean – are now based.

Skateboarding runs in the family; Stu first introduced his daughter to the sport while competing as an amateur, balancing his work in marketing.

She splits her time between California and Miyazaki

Brown’s skateboarding commitments – her first Olympic qualifier was in Long Beach when she was 10 – mean she splits her time between California and Miyazaki.

Her American residence is Oceanside, about 35 miles away from San Diego, but her first language is Japanese.

She had a serious accident last year

Brown is one of the beneficiaries of the Tokyo Games being postponed by a year because her place would have been in doubt had they gone ahead in 2020.

In May last year, Brown fell from a ramp in training, fracturing her skull, breaking her left arm and wrist and suffering lacerations to her heart and lungs.

“Sky had the gnarliest fall she’s ever had and is lucky to be alive,” Stu said at the time. “Sky remains positive and strong. The whole medical team is shocked to see her positivity.”

Brown also tumbled before her Olympic qualifier, breaking her arm, but came first while wearing a protective cast.

She is effectively self-taught

Brown first went viral aged four, when Stu posted a clip of her on Facebook, but she has never had a professional coach.

She spent hours watching and recreating clips from YouTube and has worked with the legendary Tony Hawk, but not in an official capacity.

After her fall, she used Instagram to update her followers – a group which has since grown to almost one million.

She also shares a YouTube channel with her brother, which documents their lives and her journey towards the Olympics.

Brown holds a number of sponsorship contracts, and was snapped up by Nike after turning professional in 2018.

She has since appeared in adverts with global icons Simone Biles and Serena Williams.

“I hope I can inspire other young girls by being the smallest skater at the Olympics,” she told the Guardian earlier this year.

She does two days a week at school

Because her sporting career is so hectic and requires so much travel, Brown only attends school – in Orange County – twice a week and tops up her learning online.

She is ranked third in the world

Since winning bronze in the 2019 World Championships in Brazil, Brown has cemented her position as one of the world’s best skaters, and is currently ranked in the top three.

Aged 11, she became the first female skater to land a frontside 540 at the X Games

Before her Olympic bronze, Brown left her mark at the X Games – an annual extreme sports event.

In 2019, she became the first female to successfully land a frontside 540 in the competition, rotating one and a half times on her board in mid-air.

She is a keen surfer

Taking advantage of the Californian climate, Brown loves to surf with her dad and brother, and will often be up at 5am to enjoy the waves.

She won Dancing with the Stars: Juniors in 2018

Brown also loves dancing and singing, and in 2018 turned down a place at the X Games to focus on the the junior edition of Dancing with the Stars – the US version of Strictly Come Dancing.

Victory with JT Church sparked interest in her story, and she was invited to appear on the Ellen DeGeneres show.

She released a book and a standalone single

While recovering from her accident last year, Brown released a song titled Girl, and has also brought out a book called Sky’s the Limit.

The book’s tagline is ‘words of wisdom from a young champion’.