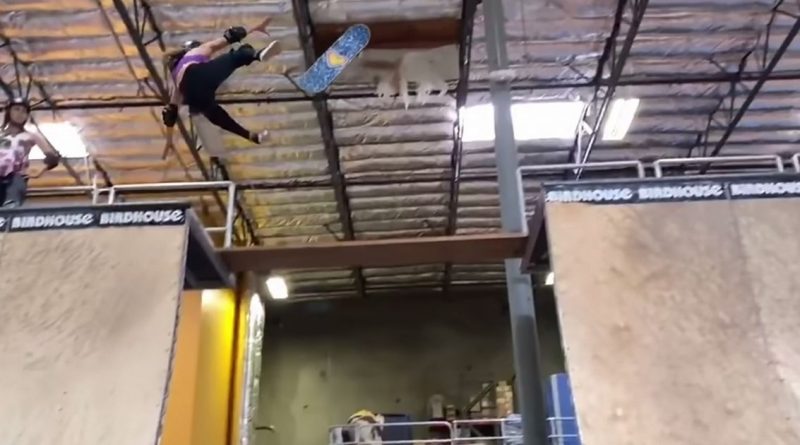 She’s just been crowned Great Britain’s youngest ever summer Olympics medallist – but Sky Brown has had a very bumpy ride to the top.

The skateboarding wonderkid, who has only just turned 13, said it was “super cool” this morning after winning bronze at the Tokyo 2020 Games.

Yet the teen prodigy is lucky to have made it to the competition at all following a horror crash last year that left her fighting for her life.

In a dramatic video, Sky revealed how she was rushed to hospital after plunging 15 feet from a ramp in training, which reportedly left her with skull fractures.

Thankfully, she has managed to put the grisly accident behind her and become one of the world’s most famous young athletes, boasting an incredible one million followers on Instagram.

Based in California, Sky fittingly lives the life of a famous actress, appearing on Dancing With The Stars, hanging out with famous pals like Serena Williams and even releasing her own music record.

Shocking video of ‘near death’ crash

Sky’s dad, Stu, is English but moved to the US as a teenager. She was born in Japan, where Stu met her mum, Mieko, and the family then moved to Oceanside, near San Diego.

The star was introduced to skateboarding by her dad, who has competed as an amateur, aged just four – and she shot to fame when he posted a video of her training on a mini ramp which went viral around the world.

Invited on to US chat shows by famous hosts like Ellen DeGeneres, Sky was tipped for the top and bagged a sponsorship deal with Nike despite her incredibly young age.

With nearly 300,000 subscribers to her YouTube channel and a million followers on Instagram, the youngster quite literally has the world at her feet – but last year shocked fans by revealing footage of her horror crash.

In a heavily-produced YouTube video, which has been viewed more than three million times, she shows the moments before she plummeted 15 feet from a ramp, before cutting to shots of ambulances, helicopters and fire engines.

Speaking from her hospital bed, the 13-year-old said: ‘I’m just going to get back up and push even harder’

She reportedly suffered several skull fractures and a broken left wrist and hand and was reported as being unresponsive on arrival to hospital.

Talking to the camera from her ward bed, a bruised and fragile Sky says: “I don’t usually post my falls, or talk about them, because I want people to see the fun in what I do… but this was my worst fall.

“It’s OK to fall sometimes and I’m just going to get back up and push even harder.”

“Sky had the gnarliest fall she’s ever had and is lucky to be alive,” her dad told BBC Sport at the time.

“Sky remains positive and strong. The whole medical team is shocked to see her positivity.”

Away from skateboarding, Sky loves surfing and fits in school two days a week around her training schedule.

“I usually get up at around 5am,” she said in an interview with The Times, “and I go straight to the ocean with family and friends and then after that have a good breakfast.

In 2018, the wonderkid won the first series of Dancing With The Stars: Juniors
(

“Then do some school and then go skating. It really depends on the waves. If the waves are good then I’ll probably go surfing again or skate and then surf.”

She celebrated her birthday just last month with her parents and little brother, Ocean, posting an Instagram snap of her with a huge ’13’ balloon.

“My birthday was a few weeks ago and now I’m in Tokyo for the Olympics,” she said. “Life is crazy and life is fun.

“Thanks to everyone especially my family.”

Her sponsorship deal with Nike made her the sports brand’s youngest sponsored athlete and she featured in a campaign alongside superstars like Serena Williams and Simone Biles.

In 2018, she appeared on the first ever Dancing with the Stars: Juniors, winning the competition alongside pro dancer JT Church, 12,

The pair paid homage to her love of surfing with a freestyle routine choreographed to Kelly Clarkson’s ‘Underneath the Tree’, wearing Hawaiian shirts and Santa hats.

“There are NO words, the picture says it all….,” she wrote on Instagram afterwards, thanking “everyone that supported me and my team that (helped) me believe in myself.

“I Can’t believe it, we WON the First Ever @dwtsjuniors. I put my whole heart out there and had so much fun.”

Last year, she released a book called Sky’s The Limit, which is filled with inspirational quotes and described as the “perfect gift for anyone who dares to dream”.

Ahead of the Olympics, Sky – who has her own custom Barbie doll – also dropped a music video called GIRL, where she sings: “Take a look, got my lipgloss on, ride or die I gotta be strong.”

‘If you believe in yourself, you can do anything’

Sky’s dedication to her sport should not be underestimated though.

The teenager’s obsession began when she tried to imitate her skatebaording hero, Tony Hawk, and the legend has tipped her to becoming one of the best skaters ever.

The skateboarder idolises Tony Hawk, who has tipped her as a future legend
(

“She has such confidence, such force, even at such a young age. The way she’s able to learn new tricks and the way she absorbs direction, it’s so rare.”

In 2019, Sky stunned the world at the X Games when she became the first female to successfully land a frontside 540 in the competition, rotating one and a half times on her board in mid-air.

Going on to win bronze at the 2019 World Championships in Brazil, she is currently ranked third in the world.

This week, she cemented that status at the Olympics, picking up her bronze medal behind Japanese pair Sakura Yosozumi, 19, and Kokona Hiraki, 12.

At 13 years and 28 days old, she is Britain’s youngest ever medallist in the summer Olympics, taking the record from Margery Hinton, who was 13 years and 43 days when she competed in swimming in 1928.


Afterwards, Sky said: “It’s unbelievable. It’s like a dream. I thought I was going to get it on the first or second run.

“I was a little nervous but I’m happy to be here and honestly I just wanted to land my trick. I didn’t really care what place I got.”

She added: “I really hope I inspire some girls. I feel like people think they are too young to take part, that they can’t do it.

“But if you believe in yourself, you can do anything. I believed in myself and I’m here.”

Got a story? Get in touch by emailing alex.bellotti@reachplc.com