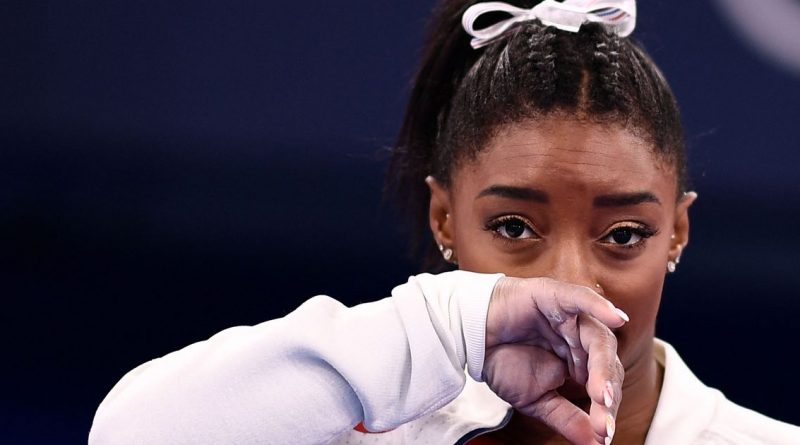 In her first weekly Olympics column, ANYIKA ONUORA has her say on watching the Tokyo 2020 Games from home, the bravery of Simone Biles and some of the new sports on show

The greatest show on earth has finally begun.

It’s every athlete’s dream to become an Olympian and after a long delay due to Covid-19, I’m sure all the athletes are excited to perform on the big stage, some waiting their whole lives for this moment.

They were well aware of the risks and what was at stake while pursuing their dream to Tokyo – but after the postponement – they are now finally getting their moment to shine to take centre stage.

I must say it has been a different experience to watch the Games as a spectator. I competed at the last three Olympics so I know exactly how the athletes are feeling.

With all the obstacles of the last 18 months, they should all be immensely proud of the their road to Tokyo, regardless of the outcome.

It was only 12 months ago I was talking daily with some of my teammates about how they wanted to quit the sport due to the ongoing pandemic.

As an athlete, there’s a lot of preparation and planning that goes into an event that happens every four years, so to put your life on hold for an additional year has been tough for some.

More so now because the athletes are dealing with team bubbles, self isolation and daily Covid tests, among other things.

But now the moment has arrived – and I for one am looking forward to witnessing an unforgettable Games with some stellar performances, this time from the comfort of my couch and thankfully not on a cardboard bed!

For some first-time Olympians who would have heard how the previous games have been (London 2012 as an example), this one will no doubt be slightly different.

The empty stadiums and no crowds – which a lot of athletes depend on and thrive from – is a huge factor with fans not able to attend due to the ongoing restrictions in Japan.

It’s strange to watch events and not see any British flags waving in the stands, but unfortunately this is the current protocol.

Having found the comfort of watching the games from ‘the other side’, it’s been a fascinating experience so far.

Did I also mention the lack of sleep?!

I was enthralled watching Team GB Olympic champion Adam Peaty defend his title in the pool. Not an easy feat by any stretch.

Fellow scouser, Bianca Walkden won a bronze medal in taekwondo. Myself and Bianca won bronze medals in Rio on the same day, and I remember her saying how much she would fight to win gold in Tokyo.

Although she didn’t win the gold this time, she showed strength, resilience and focus to come back and fight for the bronze which I’m sure she’ll be delighted to win, even if a certain washed up celebrity says otherwise.

There’s also been some heartbreak at the games too.

Seeing the news break about Simone Biles choosing not to compete in the team event and being vocal about her mental health is something we should all applaud.

She is a black woman who has the agency to no longer compete in a system that jeopardises her mental health.

There is so much power in that alone, particularly after her fierce dominance and being the face of the sport for years.

By her own admission, she said that this has been a “really stressful Olympics”.

Simone and Naomi are the type of athletes everyone should aspire to be; both in and out of competition. We need to remember they don’t owe us anything.

Simone will forever remain a GOAT whether she chooses to continue in sport or not and an athlete’s mental health should always be above an appearance of invincibility.

Simone Biles should be applauded for her bravery
(

There have been a few new sports added to the Olympic roster. I’m keen to see how they all perform as the IOC have finally started to modernise the Games.

I haven’t necessarily followed karate or skateboarding in the past but it could give the athletes in these sports an opportunity to create a new fanbase and audience.

There’s also the mixed events such as relays in athletics, triathlon and swimming, as well as archery and judo.

With the new additions, do we think this is a good idea or not? Does this take the essence away from the sport?

Sports like tennis have always had mixed doubles but how will other sports fair? Only time will tell and I’m sure the IOC will be keen to see the public reaction.

The next big change I would like to see from the IOC is to finally make sure each athlete is compensated fairly when competing at the Games.

It’s fair to say the Olympics is no longer an amateur event.

I have heard one too many horror stories about how athletes survive off little to no money, even sleeping in their car to compete at the biggest sporting event in the world.

With all the billions the IOC make, surely they can open their purse to those who are entertaining the world, essentially for free.

I have seen talk on social media about normal, every-day people competing in each event to demonstrate how hard it is to become an Olympian.

I personally think it’s a terrific idea, it may even limit the number of armchair commentators who truly have no idea what it takes to perform on the biggest stage.

It would be great viewing, add much needed perspective and may even teach the average Joe just how below par they really are!

Athletes are superhuman and should be respected as such.

Not winning a medal at the games would never be considered a failure.

I know which former breakfast presenter-turned Twitter troll I would choose. Do you?