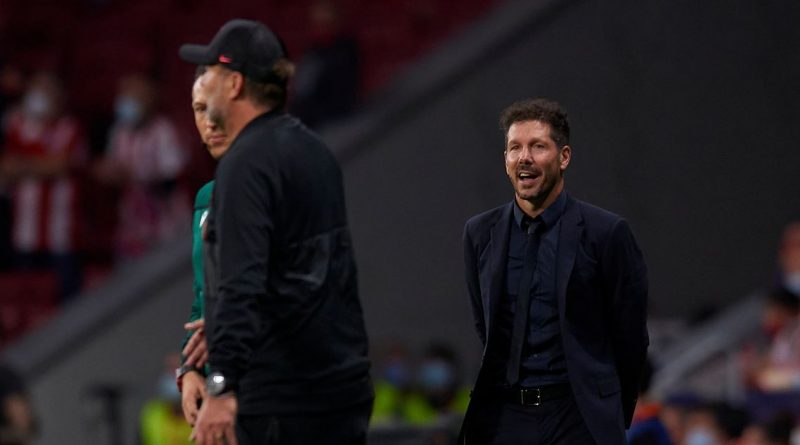 Atletico Madrid head coach Diego Simeone has insisted there is “no problem” between himself and Liverpool boss Jurgen Klopp after the pair did not shake hands following their Champions League meeting on Tuesday.

Klopp’s men took home all three points against 10-man Atletico with a 3-2 victory thanks to Mohamed Salah’s late penalty at the Wanda Metropolitano.

There was controversy towards the end when the LaLiga giants were awarded a penalty after Diogo Jota was adjudged to have pushed Jose Maria Gimenez.

But after checking the pitchside VAR monitor himself, referee Daniel Siebert overturned his decision, despite there appearing to be contact inside the box.

Simeone was furious on the touchline with the decision, having already seen Antoine Griezmann shown a straight red card for catching Roberto Firmino with a high boot early in the second half.

The Argentine stormed down the tunnel after the final whistle, ignoring Klopp’s attempts to shake hands and the incident was captured by the television cameras.

But he played down suggestions that he had purposefully avoided Klopp on the touchline, explaining that he was merely angry at the result and the game itself.

“When I’m angry, I respect the situation,” he told reporters in a press conference after the match.

“I have no problem, I just tend to do that when we lose and I’m not happy.”

The pair had already engaged in mind games before the thrilling encounter in Madrid, with Klopp suggesting he was not a fan of Simeone’s defensive style of play.

Simeone had bluntly dismissed Klopp’s claim by responding “nothing”, in English, when asked what Klopp’s criticism meant to him.

Who will win the Champions League in 2021-22? Comment below.

But despite the tension between the two managers, Klopp played down the incident and suggested they would bury the hatchet with a handshake next time they meet.

“Yeah I know, just wanted to wind me up, I don’t like that but the situation is clear: I wanted to shake his hand, he didn’t want it,” Klopp said.

“His reaction was run, mine [reaction] was not too cool as well but we are both emotional so when I see him next time we will shake hands definitely and nothing happened.

“He was obviously angry with me, the game, the world, stuff like this, it’s nothing else.”

Klopp admitted he didn’t expect the referee to change his mind over Atletico’s late penalty but declared his satisfaction with taking home three “massive” points.

“I think the other one [Jota’s foul on Gimenez] is not a penalty, but I don’t see it very often when he whistled it and he took it back in that situation.

“I didn’t expect that but it’s the right decision anyway, but I say that is clear.

“The red card was for sure unlucky, but it’s a red card foot in the face and stuff like this. We had a red card like this in the past so that can happen, obviously didn’t want that.

“It was a tough game. Come on, how you win it… I couldn’t care less to be honest, the dirty ones are the really important ones.

“When we are flying we win the games anyway. On a night like this getting three points is really massive.”

The win puts Liverpool five points clear at the top of Group F with three wins from as many games.

If they repeat that result at Anfield on November 3, Klopp’s men would be guaranteed a place in the last-16 knockout round.