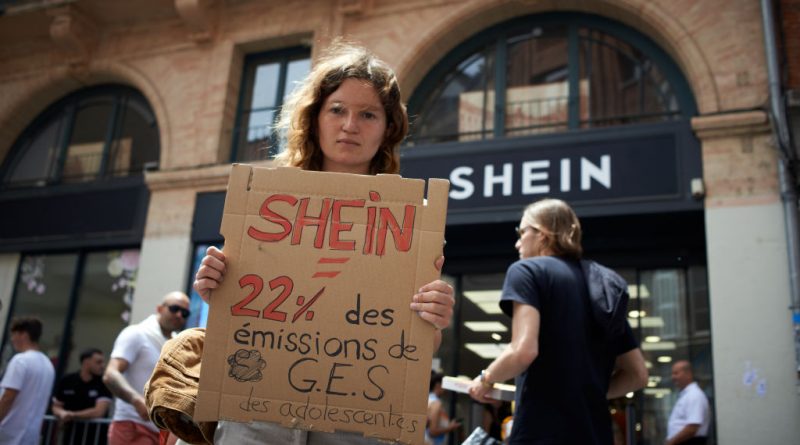 
Just before Christmas, Mélo—a lifestyle blogger from Paris known for promoting body positivity—uploaded a video on Instagram showing off shiny, glittering party dresses from Shein, a fast-fashion e-retailer from China.

”Which one do you prefer for Christmas and which one for New Years?” the French content creator asked her 75,000 followers as she twirled, strutted, and smiled at the camera. At the bottom of the caption, she tagged Shein, directing her viewers to a 15% discount on all their clothing orders.

Mélo is one of the thousands of influencers on TikTok and Instagram who works with Shein to post “haul” videos, where she tries on piles of clothes, invites followers to visit Shein’s pop-ups, and promotes their sale events. It’s a social media strategy has been wildly successful for the company, pushing Shein to the top of the fashion ladder—and making it the world’s most popular fashion brand in 2022.

According to a report compiled by Money.co.uk, Shein has taken over giants like Nike and Adidas as the most-Googled clothing brand, and Zara and Macy’s in online sales. But several reports over the last year reveal the company’s shocking track record of human rights violations and an environmentally-unsustainable model—leaving many to wonder how its popularity continues to soar among consumers.

Pronounced “she-in,” the fast fashion Chinese behemoth was founded in the city of Nanjing in 2008 by Chris Xu, a U.S.-born entrepreneur and search engine optimization specialist. Over the years, Shein went from being a low-cost Chinese apparel merchant to a global, online-only fashion juggernaut, climbing in sales from $10 billion in 2020 (according to Bloomberg) to a whopping $100 billion in 2022.

Its biggest selling point is the low pricing of clothes that are shipped to more than 150 countries and regions worldwide, catering to women in their teens and 20s. The business model works like Amazon—a sprawling online marketplace brings together about 6,000 clothing factories in China under Shein’s label, while internal management software collects near-instant data about which items are selling and which aren’t to visibly boost the popular items. According to an investigation by Rest of World, Shein added anywhere between 2,000 and 10,000 individual styles to its app each day between July and December of 2021.

The clothes are also presented in polished advertising campaigns run by Shein’s head office. The company has poured millions into Google and Facebook campaigns, advertisement deals, and even a social media reality show co-hosted by Khloé Kardashian. But the center of its marketing strategy is its use of influencers and their #SHEINhaul videos: the company has partnered with countless micro-celebrities, fashion bloggers, and reality show contestants who show off their Shein deliveries. The company was reportedly working with about 2,000 Indian influencers alone before the Indian government banned the app in 2020 as a retaliatory move against China.

An Extinction Rebellion protestor holds a placard reading “SHEIN = 22% of warming gas emitted for youths” in front of a pop-up store.

Put simply, Shein produces an astounding number of items on a daily basis—the primary reason why the company has an unsustainable model. Shein’s CEO, Molly Miao has stated that each item is produced only in small numbers, between 50-100 pieces a day, before it becomes popular and is then mass-produced. But the manufacturers’ rapid use of virgin polyester and large consumption of oil churns out the same amount of CO2 as approximately 180 coal-fired power plants, according to Synthetics Anonymous 2.0, a report published on fashion sustainability..

As a result, the company leaves about 6.3 million tons of carbon dioxide a year in its trail—a number that falls well below the 45% target to reduce global carbon emissions by 2030, which the U.N. has said is necessary for fashion companies to implement to help limit global warming.

Across the board, the fashion industry is responsible for releasing more than 10 percent of carbon emissions. Many brands that are signatories of the Fashion Industry Charter for Climate Action—the industry’s flagship climate initiative spearheaded by the U.N.—have committed to either halving emissions by the end of the decade, or to set science-based reduction targets.

With almost all of its impact taking place in its supply chain, Shein also committed to submitting its own targets for validation. In October, on the heels of the company coming under fire for fuelling wasteful consumption, Shein announced it would spend $7.6 million on a partnership with the nonprofit, Apparel Impact Institute, which works with manufacturers to set and implement energy efficiency programs. It aims to reduce supply chain emissions by 25 percent by 2030 through energy-efficient projects and a transition to renewable power for manufacturing. The projects include the Carbon Leadership program, which benchmarks and assesses carbon impact, and Clean by Design, which will aim to reduce energy, water, and chemical consumption in textile production at more than 500 of Shein’s partner facilities.

Still, the impact of these initiatives is yet to be seen, especially considering a survey by BCG which found that just 18% of retailers who had previously set emissions targets were on track to achieving them, while another 35% were stalled in their progress.

A damning record on workers’ rights

Despite it all, perhaps the bigger controversy regarding Shein is the treatment of its workers, who toil away in Chinese factories in unfit conditions. A lengthy investigation by Wired first chronicled how both laborers and consumers suffered from the production of its clothes, while a documentary by the U.K.’s Channel 4 found that Shein employees were working 75-hour shifts with very little time off. Then, Swiss watchdog Public Eye released another detailed report in November which accused Shein of violating Chinese labor laws. The group hired independent Chinese researchers to track Shein’s manufacturing and packing process in China and Europe and found that many were running informal factories set up in residential buildings.

Advocacy groups and journalists also uncovered evidence that Shein’s $11 bikinis and $7 crop tops were being made by people working in unsafe workshops, lacking safety protocols like windows and emergency exits. Many also worked without contracts or minimum wage requirements, thereby allowing the company to reportedly fail to pay its employees properly. Channel4’s documentary, Inside The Shein Machine, sent undercover cameras to film factory workers who were forced to pull 17-hour shifts to make hundreds of garments a day. In one factory, they made a daily base salary of $20, which would then be docked by $14 if any garments had mistakes.

A crowd waits to enter SHEIN’s first physical store in Madrid, on June 2, 2022.

Eventually, Shein admitted to the breaches and released a statement that read: “We know we have a responsibility to safeguard the welfare of workers in our supply chain. In light of the recent report in the news, we launched an investigation into the claim that 2 of our suppliers had unacceptable working conditions at their facilities.”

But still, the brand continues to soar in popularity across the world—especially in countries like France, Ireland, Iceland, Egypt, Sudan, South Africa, Saudi Arabia and China. When Drew Afualo, a TikTok influencer with over 6 million followers, faced online backlash for partnering with Shein, she defended the partnership by saying that “not everyone can afford to shop sustainably.”

“Sustainable fashion is a privilege,” wrote the 26-year-old in response.

What’s next for Shein?

In December, it was reported that Shein is now exploring moving to an online marketplace platform to enable other merchants to sell directly to customers, rather than under Shein’s label, according to a memo to investors viewed by The Wall Street Journal. “The marketplace platform makes available a range of additional merchandise and shipping options, and we expect it to result in increased customer engagement and satisfaction,” the memo said.

The move is seen as part of the company’s attempt to move its supply chain away from China, where it has largely been rooted with over 3,000 suppliers in southern China’s Guangdong province. With its headquarters now based in Singapore, Shein also began manufacturing in Turkey and is leasing and operating warehouses in Poland to ship to customers in Europe.

In the same memo, Shein addressed concerns around labor law violations, stating that all suppliers would be required to comply with a code of conduct based on conventions by the International Labour Organization. Shein has also built an in-house team that will monitor its supply-chain partners and is engaging independent agencies like Intertek Group PLC to conduct regular audits of supplier factories. Citing an Intertek study that found 96% of its workers receive wages higher than the industry average, Shein also said it had made “significant investments to improve the working conditions of our suppliers’ facilities.”

In the meantime, influencers are also under increasing criticism from environmental and workers’ rights organizations for working with Shein—with some even deciding to part ways as a result.

Georgia Portogallo, a 21-year-old British influencer with over 200,000 followers on Instagram and TikTok, released a video stating that would no longer be working with the brand until its working conditions had changed shortly after appearing on the Channel 4 documentary.

“I now know … that [Shein’s] staff are underpaid, they work too many long hours, they don’t get days off. The whole working conditions are horrendous,” she told her TikTok followers.