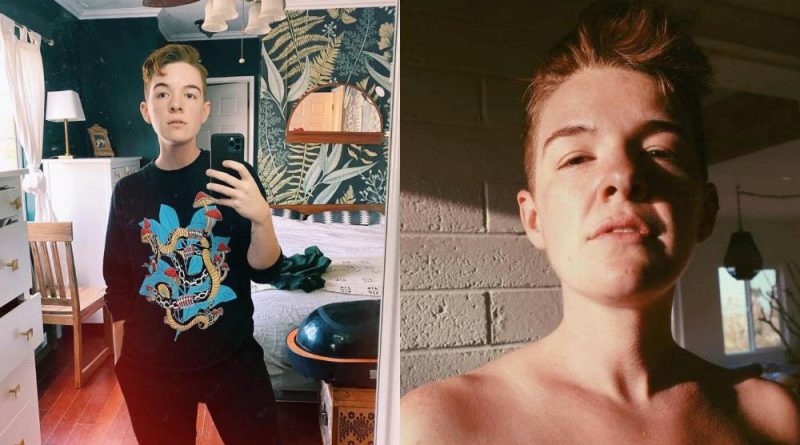 Noelle Stevenson opens up about their new autobiographical comics on Substack which detail aspects of their transition, mental health journey and other details of their life. (Instagram/@gingerhazing)

She-Ra and the Princesses of Power creator Noelle Stevenson opens up their life, being trans and mental health in a new autobiographical series.

In one of the “quiet comics” that make up Noelle Stevenson’s new project, I’m Fine I’m Fine Just Understand, he talks about being at a place in his transition where he is “getting used to people staring at me in a new way”.

Sometimes it’s a look of “confusion”, writes Stevenson, who came out as “non-binary or something like it” in 2020.

Sometimes, they see a look in people’s eyes that “used to be in mine” before they started their transition – thoughts of: “I’m so jealous”, “I wish I could” and “One day I’ll…”

“I don’t know your path, stranger. I do not know who you are in your heart,” Stevenson writes. “But I am sending out a little golden thread for you, should you need it the same way it was sent for me.”

Stevenson explores their experiences with gender, mental health, getting older and more through the new Substack project, a return of sorts to their roots.

Today, they’re best-known for the groundbreaking Netflix series She-Ra and the Princesses of Power, which was lauded for its LGBT+ characters such as central couple Adora and Catra and the “non-binary shape-shifting mercenary” Double Trouble.

But Stevenson has been writing comics since he was at art school. It was there that they began the Eisner-winning webcomic Nimona, which was eventually published by HarperCollins. They also have attracted fans from all over for their work on the comic Lumberjanes; their time working for Marvel Comics on Thor and Runaways; and their memoir The Fire Never Goes Out.

Speaking to PinkNews, Stevenson reflected on going back to a smaller, more intimate way of working and their response to the rise of transphobia across the US.

What has the transition been like going from working on She-Ra and the Princesses of Power to this smaller, more personal project?

She-Ra was my most high profile project to date, which was amazing, and I felt so grateful to have gotten that amount of hype and that sense of audience. But I also started to feel very exposed. Over time, I sort of scaled down engagement on Twitter because, at a certain point, [you’re] very aware that eyes are on you, and I knew it’s easy to lose control of because things like that are meant to be shared.

It’s been just a whirlwind few years for LGBT+ representation in the media in general. It’s been something that has changed, especially in comics and cartoons. It was so exciting. I rode the high of Catradora [the fandom name for the relationship between Catra and Adora from the She-Ra and the Princesses of Power] for – that was such a long game. It was something I didn’t know if we were gonna be able to do or have room to pull it off.

I was very satisfied and very proud of Catra and Adora. And then, I think immediately afterwards either: how I do this again, or how do I up the game. I realised that what I want to do is delve below the surface: take that open door and the doors that others opened for me and dig a little deeper to figure out what stories are possible now that weren’t before.

I feel like sometimes comics can take on a life of their own as people add their own experiences onto it. Sometimes that’s nice. But a lot of times, I want to share a part of myself, and I want people to see themselves in it. But I also don’t want it to have to become “relatable”. I want it to just be us meeting together on the emotions that are in the comic.

Maybe they won’t have a huge fandom or ship name. But I still want to be able to tell those stories, and I don’t think it’s a bad thing for them to not be for quite as big an audience. I think some stories need that more intimate nature.

The comics in your Substack touch on a lot of different aspects of life, like being part of the LGBT+ community, dealing with mental health, the effects of social media and handling fame. How has it been for you to tell these intimate stories?

It’s something that has affected me a lot in recent years, and a lot of these comics are my way of processing some of that. Having had gotten successful, fairly young, I felt a kind of pressure to not let people down, not burnout, carry through to the end. That’s a lot of pressure to be under.

Especially recently, with a pandemic and being home all the time, I think I found a lot more value in just having that smaller space, scaling things back and kind of trying to reconnect with why I do this, why I became a storyteller in the first place, why I draw and why I write. I have this eagerness to please or to try and do what people want me to do. That’s all kind of tied in with the way I always viewed myself, my career, my success.

That’s not gone away by any means, but it is something where I’m trying to reconnect, going back to the roots of who I am and what kind of stuff I make.

I feel like a weight has sort of been lifted, making the comics for this newsletter. I feel like I can be vulnerable, and the context is understood in this case, which is it’s my space to be vulnerable. I think I found a lot of value in that.

One of the things I love about the project is the explainer you include at the bottom. You urge Substack to deplatform TERFs [trans-exclusionary radical feminists] and tell any TERFs reading that they should “get f****d”, and that you’ll block them.

Transphobia is running rampant right now, and it’s something that is just so vile. I think TERFs are a special kind of evil as well. It’s taking violent transphobia and couching it as feminism, social justice or concern. There’s so much dishonesty wrapped in what being a TERF is.

I kind of don’t like the word “TERF” because it has radical feminists as part of it, and they’re not at all. They’re radical, just there’s nothing more sexist than reducing someone to their biology as your main worldview. That’s something just vile.

I refuse to give them an inch ever. I refuse to engage. They’re dangerous, and it’s something that I will continue to speak out against at every opportunity. You can’t cede any ground because they’ll take a mile.

I’ve been heartened by the amount of solidarity that I’ve seen of people rallying against really notable transphobes and TERFs. I think this wave of transphobia is happening as pushback because there are so many people who are coming out, who are finding themselves, who are seeing a glimpse of a beautiful new world. That’s what we have to keep and focus on.

They can kick and scream all they want. But they are the ones that are there on the losing side.