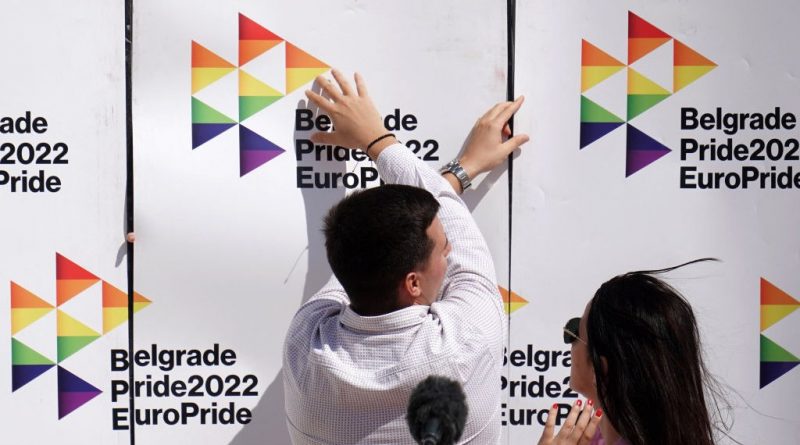 
The first time Kristine Garina attended EuroPride, the largest LGBTQ event in Europe, it was in a post-Communist state that didn’t exactly have a reputation for being a bastion of LGBTQ rights. But even though Garina says she expected the 2010 event in Warsaw, Poland to be “really bad,” it was ultimately a success—becoming one of the largest Pride marches of its kind in the country’s history. Five years later, she helped bring EuroPride to her native Riga, in Latvia, where it was also a success.

This week, as president of the European Pride Organizers Association, Garina is bringing EuroPride to the Serbian capital of Belgrade, where the festival will mark its 30th anniversary and its southeastern Europe debut. But there is one problem: Serbian President Aleksandar Vučić announced last month that Serbia would no longer host the week-long event, citing among other reasons right-wing threats. Although previous Pride events have taken place in Belgrade without incident, they have also been subject to violent clashes between far-right groups and police, the worst of which occurred in 2010. A decision on whether this weekend’s Pride march will be allowed to go ahead is expected on Tuesday.

EuroPride’s organizers have vowed to press on regardless, noting that the event is not the center-right leader’s to cancel. “We are still going ahead because there is no formal ban,” says Garina, adding that she has every faith in the Serbian authorities’ ability to ensure that the festivities proceed smoothly and safely. “I find it quite ironic that I have all the faith in Serbian police and their President doesn’t.”

With organizers expecting thousands of participants to arrive in Belgrade this week ahead of Saturday’s EuroPride march through the city, the Serbian government’s attempted cancellation—and the organizers’ persistence to see the celebrations through—sets the scene for what could be a showdown between EuroPride goers and far-right counter-protesters in one of Europe’s worst-performing countries in terms of LGBTQ rights.

In some ways, Serbia was always going to be a risky choice for EuroPride. Unlike Barcelona and Dublin, which lost their hosting bids to Belgrade in 2019, Serbia’s standing when it comes to LGBTQ rights has been lackluster. Same-sex marriage is illegal in the country, where just over half of the population considers homosexuality to be a disease, according to a 2020 survey by Civil Rights Defenders, a Stockholm-based human rights organization. Although Serbia reached a historic milestone in 2017 with the appointment of Ana Brnabić, the country’s first lesbian Prime Minister—who was both nominated by President Vučić to preside over the cabinet and elected by the Serbian parliament—it has done little to improve the rights of its LGBTQ community since. “It just proves that being LGBT in a high position is not enough for equality,” says Garina. “You actually have to do something as well.” (Brnabić’s office did not respond to a request for comment.)

In the weeks leading up to EuroPride, thousands of people have joined religious and nationalist protests against the festival and senior figures of the Serbian Orthodox Church have condemned the event for “desecrating the holy city of Belgrade.” More protests are expected in the coming days. But the way EuroPride’s organizers and supporters see it, these factors make the festival more necessary, not less. “EuroPride is a lighthouse event for the whole queer community in Europe because the situation of LGBTI rights is not completely homogenous across Europe,” says Terry Reintke, a German lawmaker and co-chair of the LGBTI group in the European Parliament, who plans on attending Saturday’s Pride march in Belgrade. In a letter, Reintke and 144 members of the European Parliament urged the Serbian government to honor its commitment to host EuroPride and reminded Belgrade of its obligations to ensure that the safety of participants is protected.

“In instances like this, it is so important for the community to stand together and say we are not going to back off,” says Rientke. Whereas yielding to the government’s efforts to cancel the event would feel like caving to far-right nationalist demands, she adds, holding EuroPride in spite of them “would be such a signal of hope.”

The only signal coming from the Serbian government so far, however, is confusion. Despite its stated cancellation of EuroPride last month, no formal bans against the event have been issued. Any efforts to do so in the coming days will almost certainly be appealed by EuroPride’s organizers. In the meantime, the festivities have already begun, including an opening ceremony that saw the Pride flag raised over the Palace of Serbia (though no one from the Serbian government was in attendance). Organizers are already bracing for thousands of attendees from across the continent—thanks, in part, to the Serbian government. “People are outraged and angry and people want to go out on the street and express that emotion,” says Garina. As for Vučić’s threats of cancellation: “It’s promotion that money can’t buy.”