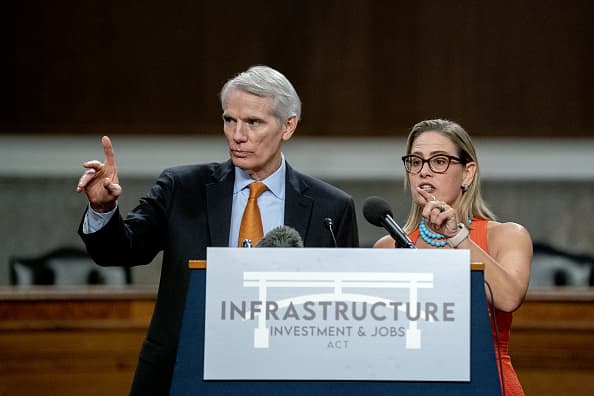 Senator Rob Portman, a Republican from Ohio, left, and Senator Kyrsten Sinema, a Democrat from Arizona, speak during a news conference in the Dirksen Senate Office Building in Washington, D.C., U.S., on Wednesday, July 28, 2021.

The Senate will vote Friday to move forward with a bipartisan infrastructure bill as Majority Leader Chuck Schumer pushes to pass it as soon as next week.

The procedural measure will need a simple majority to pass in the Senate split 50-50 by party. The chamber last advanced the proposal by a 67-32 margin in a Wednesday test vote.

The vote continues a scramble by Democrats to clinch two massive pieces of their economic agenda before the Senate leaves for its recess scheduled to start Aug. 9. The chamber could stay in session through the weekend to debate and amend the plan.

The measure would put $550 billion in new funds into transportation, power, water and broadband. While negotiators have outlined how much money would go into everything from roads to railways and electric vehicle charging stations, senators have not released final legislation.

Democrats aim to pass the bill along with a second, separate $3.5 trillion package that would include a bevy of other party priorities. The proposal could address child care, paid leave, tax credits for households and climate policy.

Schumer, D-N.Y., hopes to approve a budget resolution, a key step in getting the bill through Congress, before the Senate leaves for its recess. The vote would unlock the budget reconciliation process, which would allow Democrats to pass their plan without a Republican vote.

The bipartisan plan had more than enough GOP support to advance this week. Seventeen Republican senators including Minority Leader Mitch McConnell, R-Ky., voted to move forward with it Wednesday. They joined all 50 Democrats.

Their support for the procedural motion does not mean they will back the final bill. It will need 60 votes to get through the Senate.

With their two-pronged strategy, Democratic leaders hope to appease both wings of their party. Centrists wanted to strike a bipartisan infrastructure deal, while progressives aimed to expand the social safety net and better prepare the country to fight climate change.

The party has to navigate an evenly split Senate and a narrow majority in the House to pass both bills. One defection would sink the Democratic bill in the Senate.

Senators including Kyrsten Sinema, D-Ariz., have signaled they will vote to pass the budget resolution but try to trim their party’s $3.5 trillion price tag for the reconciliation bill. House progressives have raised concerns the plan will not be robust enough.